THE DARK ART of KLIMOWSKI 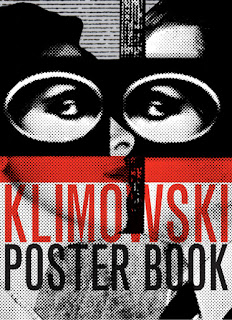 Synapse, portrait of Klimowski and Danusia Schejbal, silkscreen of photomontage, 1983

'A few words about Klimowski? Impossible. You can't capture an imagination such as his in a sentence or two. He is a free man and you'll never catch him. He looks at things head-on but at the same time inside out and upside down, round the corner and through a shattered keyhole. His eye is a microscope, a magnifying glass, a two-way mirror and a crystal ball. He leads the field by a very long furlong, out on his own, making his own weather. He is Klimowski, unafraid.'  - Harold Pinter

Fine words from the late playwright who knew a kindred spirit when he saw one. Both share a sense of menace in their work.


Klimowski is a broad-ranging graphic artist, employing many techniques and experimenting with photography, painting and printmaking.. He is a world-class illustrator, producing many series of fine book jackets and, in recent years, has racked up a number of graphic novels for SelfMadeHero and also produced their company logo. He is an Emeritus Professor at the Royal College of Art.

This beautiful brand new SelfMadeHero book contains poster works from 1977 to 2017, providing a wonderful overview of one aspect of this maestro's prolific and diverse lifework. Rick Poynor in his great art/design magazine The Eye, identifies Klimowski's   "mental library of obsessional images to which he must endlessly return: eyes, faces, hands, the naked torso, angels and demons, snakes, flames, pens, pencils and cameras.' [Poynor's excellent essay 'Theatre of Dreams' [Autumn 1994] is an insightful source. See also his essay in Design Observer]

Klimowski was born in London in 1949 of Polish parents. Poynor writes:
'His first visit to Poland with family friends at the age of 11 revealed an unsuspected world of steam trains, lazy month-long summer holidays and fine living on a shoestring.'

From 1968 to 1973, Klimowski studied sculpture, painting and graphics at St. Martin’s School of Art. He did not plan to become a graphic artist but Poynor says,  he was drawn to the posters he saw in the jazz clubs on his trips to Poland. His interests shifted towards photography and European film-makers. 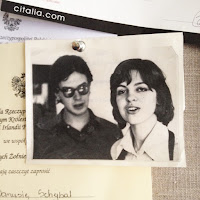 Klimowski met Danusia Schejbal ("love at first sight") and they decided to go and live in Poland.

"When we went in the 1970s to live there, Poland was like the 1950s in England. Even the cars were rounded and slightly old-fashioned. You had wood panelling and chrome lights and radios with valves." Poynor comments: 'This sense of pleasurable dislocation, of being out-of-time and adrift in a world of archetypes, has become one of the defining characteristics of his work.'


From 1973 they lived and worked in Warsaw. For the first two years, Klimowski studied at the Warsaw Academy of Fine Arts; poster design under Professor Henryk Tomaszewski and film animation under Dr Kazimierz Urbanski. 'Klimowski began working professionally while still a student at the academy. .. In 1974 he married Danusia Schejbal, also a child of émigré parents, and she joined him at the academy to study set design. Klimowski asked to stay on for another year and spent much of the time working on stop-frame animations.

Poynor writes: '...he made his way as a student to Warsaw, where he rapidly built a career for himself as one of the leading young Polish poster artists of the 1970s....'His posters for Polanski’s 'Chinatown' and Altman’s 'Nashville' (1976), won him a bonus payment, a prize from the Hollywood Reporter and Polish newspaper coverage'.

Klimowski said: "Suddenly I got masses of posters and I was one of these big poster designers. It was a big thing for a graphic artist because everybody saw them."


Only one of Klimowski's film or theatre posters that he produced in Poland was censored. His imagination was allowed full reign because theatre posters had to be produced long before the full details of the look of the production were settled. The now famous film-posters for American films also relied largely on his own imagination and a brief synopsis of the plot line. Danusia was on hand to gracefully life-model for many of these.

'Then' writes Poynor 'in 1980, just before the imposition of martial law and at the height of his success, he saw what seemed to be a well-mapped future opening up ahead of him, took fright at the certainty of it all ... and decided to return with his family to Britain.'

Klimowski's work is dark. In the tradition of past photo-collagists, (Surrealism, Dada and Expressionism), elements jostle for attention in vividly disturbing ways.

Wings and antlers sprout from heads that often appear to be full of machinery. Striking black and white hand-drawn work contrasts brilliantly with an artful photmontage slashed with colour 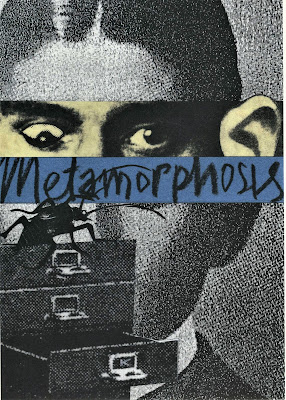 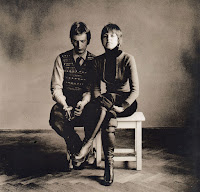 Andrzej Klimowski and Danusia Schejbal revisited their journey to Poland  in the graphic novel 'Behind The Curtain', also published by SelfMadeHero. They talk about the project on a YouTube video. See also an interesting and delightful interview with them both at www.pocko.com/schejbal-klimowski/