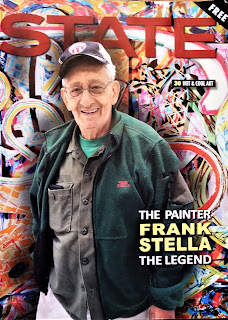 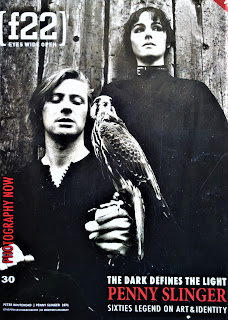 To come across two new art magazines in the same week is a rare and delightful event. To complicate matters somewhat STATE and f22 are two different magazines in one. To quote 'Totally free, STATE is about new manoeuvres in painting and the visual arts - combined with f22, a supplement on developments in the fusion of art & photography. It is not a review magazine. It's about PEOPLE  worth serious consideration; PLACES that are hot and happening; and PROJECTS developing in the art world'. STATE is 83pp and f22 is 4Opp. Yes its free. First published in January 2011, this bi-monthly is distributed to art schools, galleries, libraries and museums across the UK. You can get copies posted to you free if you pay for the postage. See state-media.com
Its the brain child of  Mike von Joel who has been working in publishing for 40 years and has a long track record of producing magazines. His first was The New Style (1976-1980)  which promised readers ''the disgusting inside stories'' about fashion and the news media. A string of art magazines followed  - Art Line (1982-1997) Artissues and artBooknews (both founded in 1990), State of Art (a free newspaper 2005-2007). He also edited Photoicon, a Norwegian-based magazine focused on international photography. Von Joel is the Creative Director of 'Art Bermondsey Project Space', a not for profit contemporary art gallery founded in 2015. Their blurb reads:

'Project Space presents art, photography and moving image from across the UK, offering a flagship venue for both emerging and established artists. This, combined with our visionary educational and early learning programs, promotes freedom of creative expression through the visual arts. The converted Victorian Paper Factory (hence name The Vellum Building) provides three exhibition rooms and our proximity to the world-famous White Cube gallery establishes interest from all levels of the contemporary art world'.

The magazine is stuffed with interesting material leading with a lengthy interview with Frank Stella, now aged 85 and still working hard at his studio complex at Rock Tavern, New York. Another long piece is about Lynn Barber the journalist and the interviews she  conducted with Tracy Emin (who became a good friend), Damien Hirst, Mark Quinn and the Chapman brothers, one of whom threatened to kill her.

There's News and Money sections, Art books reviewed by von Joel and a DOCUMENTS section with nine essays by different authors on 'Art in Theory and Practice'. These include a leading piece on Andy Warhol's Exploding Plastic Inevitable and an interesting essay on food and art featuring Joseph Beuys and  a shop in Scotland called Narture - Baking Bread to fund arts projects'.

If you now turn the magazine over f22 has some interesting material - the collage work of Penny Slinger, the amazing photojournalism of David Taggart under the theme Republic of Humanity. His photos of people all over the world are extraordinary and deeply moving as well as being technically amazing. I also got fascinated by the piece called The Lost Faust, an art film by Philipp Humm, starring Steven Berkoff, which took three years to make. It is set in the future but based on Goethe's famous tragedy about this medieval necromancer and alchemist. The film is part of a wider project, what Hamm calls a Gesamtkunstwerk which means a 'total work of art'. Humm also is producing an illustrated novella, drawings, sculptures, fine art photos and paintings. 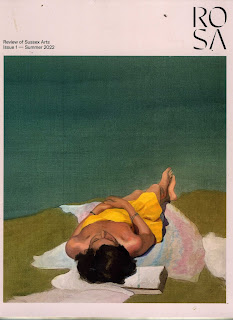 ROSA [The Review of Sussex Arts] is a complete newby  quarterly magazine put together by Jessica Wood as publisher with Alec Leith as Editor (formerly of the local magazine Viva Lewes. now defunct) with Rowena Easton as Art Director.
The opening Editorial suggests that apart from visual arts which make up the entire contents of this first issue (106 pages/£9), they will, in the future, also include musicians, live performers and writers. In contrast to STATE the design has lots of white space and big headlines. They have managed to get 14 pages of advertising which suggests there is a healthy future for the project
It begins with a roundup of summer festivals, events and exhibitions followed by a seven page feature on their chosen cover artist Fergus Hare, a Portslade based painter. This set of pictures with beaches, sea, clouds and anonymous figures have been  compared to Edward Hopper which perturbs him. He tells Leith that they are all connected with his mother who died when he was 18. "I am trying to contact her with what I do as if she were alive. Not in subject necessarily, but emotionally."
Next we have an artistic duo of Ben Langlands & Nikki Bell who have staged three exhibitions Utopia, Absent Artists and Near Heaven at Charleston. The latter refers to Vanessa Bell's attic studio which for many years had been unused and was chock-full of an  abandoned objects and dusty files. The artists cleared it out because, says Nikki, "We want you to stand in the physical space where Vanessa stood". Her daughter referred to her mother's studio as Near Heaven.
There's a great presentation of the late Robert Tavener's sketchbooks whose archive is being carefully managed by Emma Mason. Tavener  taught at Eastbourne art college and his beautiful work has gained an international reputation.
Alex Grey's article features the pictures and story of a church mural that Grey helped save from destruction. Grey has been compiling a list of works of art in Sussex streets, parks, churches and other public places
Alexandra Loske, a curator at the Royal Pavilion and Brighton Museums, is the author of Colour: A Visual History. Her piece focuses on the colour blue.
Next is a profile of Glyn Philpot (1884-1937) to initially made his reputation for his portraiture but then switched his style to Modernism. The  Pallant House Gallery is staging a retrospective of his work entitled Flesh and Spirit which will run until October.
'Who Am I Today' deals with  Katie Sollohub's oeuvre and her unusual daily routine which involves swimming in the sea no matter what the weather conditions are and then painting  a head-and-shoulders self-portrait straight after.
This summer Glyndebourne will stage an exhibition that highlights 70 years of programme covers. which includes work by Hockney and Grayson  Perry.
There's more on Charleston with an article on Vanessa Bell's Garden,  an architectural piece on the Bayside tower in Worthing, a day out in St Leonards, works of art for sale, cartoons by Harry Venning' 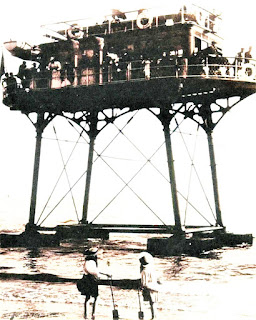 Luciana Hill's 3D recreation of Magnus Volk's strange and wonderful Daddy Long Legs which offered a 'Sea Voyage on Wheels' from 1897 to 1901 is made possible by an app made by creative technologist Alex May [my son!!]
A rich mixture by any account. More details on subscriptions and stockists here. https://rosamagazine.co.uk/
at 2:08 pm