THE EALING CLUB: BIRTHPLACE OF BLUES IN BRITAIN 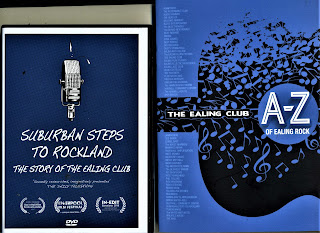 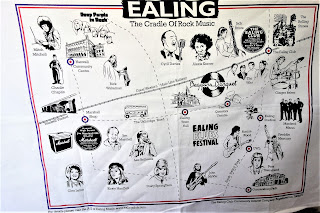 You can buy all these items from the Ealing Club Community Interest Company
The DVD paints a good picture of why this venue is considered to be the epicentre of the Blues Boom through extensive interviews with key players. 'The A-Z of Ealing Rock' provides short profiles of many musicians who were attached to Ealing and the club. The tea towel is a map and chart of those people
https://the-ealing-club.myshopify.com/collections/all
*
This third piece about the birth of blues in Britain links to my two previous posts about Ricky-Tick clubs and  Eel Pie Island which, when taken all together, give a good picture of how things developed in the the 1960s.
The story of this remarkable venue began when Fery Asgari, an Iranian student who had come to study English at the Ealing Technical College got involved with some bands in the art school of the college. He told a BBC interviewer: "The art school at the college could boast various bands, many in love with the blues. I found myself helping to promote the music nights but it was hard to find a venue because the music was so loud.

"Then I was walking near Ealing Broadway station and I heard jazz and I followed it down the steps… and I found this little basement music club. Within a few weeks I was running the place. To start with we had jazz on Thursdays and Fridays and R&B on Saturday."

The two most important figures in R&B at the time were the pioneering Alexis Korner and Cyril Davies who had been running the acoustic London Blues and Barrelhouse Club from the Roundhouse pub at Wardour Street in Soho had recently been ejected for playing electric music. They relocated to the Ealing Club and played their first gig there on 17th March 1962 - a night now celebrated with a blue plaque.

Korner recalled: “The club held only 200 when you packed them all in. There were only about 100 people in all of London that were into the blues and all of them showed up at the club that first night” All the musicians remember it as a sweaty moist place.

In the coming months everybody met everybody. Alexis and Davies ran Blues Incorporated which had a constantly changing line-up. Amongst the players were Eric Burdon, Paul Jones, Long John Baldry, Mick Jagger and Eric Clapton. It was a place where new bands were hatched and many musicians cut their teeth and learned their riffs.

On the evening of 7 April 1962 Mick Jagger and Keith Richards visited the Ealing Club to see Blues Incorporated for the first time. The club was the place where they later met Brian Jones for the first time. On the 12th January 1963 the classic Rolling Stones line-up played its first gig to an audience of about five people! In the Ealing Club documentary Pete Townshend  says that the Stones played 400 shows in 1963, many of which were at Ealing. Ronnie Wood also played the club with his band The Birds.

When Alexis parted ways with Cyril, the latter got his All Stars band together featuring Ginger Baker,  Jack Bruce, Dick Heckstall-Smith and Graham Bond,

Just down the road from the club was a music shop run by Jim Marshall whose amps were much more    powerful than others. Working there as a Saturday boy was Mitch Michell who learnt to drum there. He played at the club in a band called Soul Messengers, toured with many others, played with Georgie Fame before gaining stardom with Jimi Hendrix. Other musicians who came to the club were John Mayall, Rod Stewart and Dick Taylor.

In 1964-1965 the Mods started arriving at the Club and The Who did many gigs there and when Psychedelic culture arrived the Pink Floyd played there. Later came soul and reggae artists followed by a disco scene and house music.

Sadly the huge Crossrail project will reach Ealing and the Ealing club building is to be demolished. The end of an era.