CURIOUS FACTS; THE STORY SO FAR

'Experience has shown, and a true philosophy will always show,
that the vast, perhaps the larger, portion of the truth
arises from the seemingly irrelevant.'
- Edgar Allan Poe

'Darwin delighted in snuffling through such trifles,
collecting clues, the oddball, the unnoticed, the incongruous -
becoming, he laughed, 'a complete millionaire in odd and curious little facts.'
- Adrian Desmond and James Moore
from 'Darwin' (Penguin Books) 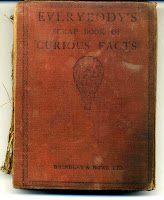 Little did I know that my life was going to change one Saturday morning in the early 1970s when, on my usual trawl through the junk stalls of London's Portobello Road, I discovered and purchased a tiny book entitled 'Everybody's Scrapbook of Curious Facts'. Frustratingly, the book had lost all its title pages with author and publishing details and dates, but its contents were sufficiently intriguing to more than compensate, containing items on such unlikely topics as Greasing Soldiers' Feet, Carving on Peach Stones, Newspaper Names in the Far West, and the Language of the Parasol.

Shortly afterwards, our small creative book production group (known as Clanose Publishers) was asked to compile a book of trivia by the American publisher Holt Rinehart Winston. In our office library, uniquely arranged using a new classification system based on Roget's Thesaurus devised by our Bostonian librarian Lee Torrey, we had already begun compiling a small card file of strange facts too good to waste, and from that we began accumulating as random an anthology as you could imagine, which was successfully published in the UK and US to, I have to

say, some acclaim, certainly when measured in terms of sales, column inches, paid extracts and especially radio shows. I am can remember being grilled in a small hot room by the rather intimidating Tommy Vance (who has recently departed for a gig on the far side, taking his gravelly hard-rock voice with him) for the Forces Network. ['Curious Facts' (Secker & Warburg.1981. SBN 43627439 6)]

It was also reviewed by three of the 21 (!) newspapers in New Zealand. The Wairarapa Times-Age declared the book was ‘just the present for the raconteur, romanticist, boaster, orator; ideal for the person you may not know too well; or for someone who you think could do with brightening up.’

The Press in Christchurch advised: ‘While its treasures could just as well be laid bare by the open-cast method of a cover-to-cover reading, perhaps its gems are best discovered by a random digging.’

Best of all was the review in the Rotorua Post: ‘A man might do worse than jot down all the oddities of nature, the obscurities of history, the absurdities of existence, the tangles of technology, and other trivia as he comes across them, and then publish to amuse his fellow
humans.’

It was someone’s idea, possibly mine, to publish a magazine - 'Curious Facts Monthly' - in order to promote the book (which was published appropriately on April 1st). This was not a smart business idea and I don’t recommend anyone else to try it. Still the six issues we produced remain cult items on e-bay and are wonderful curios on a more innocent era of publishing. The first issue featured Ronald Reagan holding hands with a chimp, the final issue showed a man walking hand-in-hand with a robot. All of this seemed to make good sense at the time.

There things might have ended had it not been for my meeting comedy writer Kim Fuller. With his enthusiasm and help we first tried to get a radio show off the ground (a pilot episode featuring Enn Reitel amongst others, was recorded one Sunday (6.10.91) at BBC Broadcasting House).

That failed but we got the tv series away due to us linking up the now ubiquitous figure Jonathan Ross. The resultant ‘Fantastic Facts’ was 13 half-hour programmes, commissioned by Carlton, which ran throughout the summer of 1993. It gained an average audience of 8 million viewers, which was considered a success but not a hit, hence no second series was commissioned.
The show was done in an old-fashioned light entertainment style, with a huge and bizarre set and a big studio audience. The elements of the show were Ross interviewing a bizarre variety of strange people who had either been captured by aliens, spotted black panthers, collected meteorites, had fantastic and freaky memory abilities and so on. Our outside reporter was Pamela Anderson, formerly of ‘News At Ten’, who was hopeless. We had stunts in the studio (man lifting a mini with his teeth), the wonderful inventions of Wilf Lunn, plus archive Pathe clips of, for instance, a man being locked up in a trunk and blown up with dynamite, and animations. [The tie-in book was ‘Fantastic Facts’ [Carlton Books/Bloomsbury. 1993. ISBN 0 7475 1573 5]

The same year saw the publication of ‘The Book of Curious Facts’ [Collins & Brown. 1993. ISBN 1 85585 043 5], illustrated with old engravings, which began with a list of incidents of ‘carry-on baggage abuse’ on airlines (like the man who tried to bring a stuffed pony on a plane) and ended with ‘World-Wide Worms’, an account of an unusual Illinois-based company of that name. 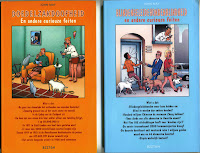 Also as a strange hardback in Poland - Zwyklych Rzeczy Faktow I Zjawisk [Real Press. 1994. ISBN 83-85878-58-0], with some marvellous line drawings by Anna Kaniewska. It has a double-sided cover; half the book is read from the front, half from the back.

So far so good. It is now my intention to use to the full resources of my vast clippings library and the internet to begin compiling what I like to call ‘The Curious Facts Connectopaedia’ in this blog. Hope you enjoy it watching it take shape.

Final note for now: I did eventually discover the author, publisher and date of ‘Everybody’s Scrapbook of Curious Facts’ from ‘Victorian Curiosities’ (title is mis-spelled) by Jeremy Nicholas [Little, Brown & Co. 1995. ISBN 0 316 87587], which is an anthology of exceprts from the original work. Nicholas identifies the author as Dan Lemon, the pseudonym of a writer called Charles Nisbet and the book was published in 1890 by Saxon & Co. of Bouverie Street, London.

Lemon’s introductory remarks are worth reproducing: ‘For a long time I have intended to publish a collection of curious facts selected from books and periodicals. I have often found that when the mind was so wearied that even a sensational novel failed to fix the attention, short paragraphs about unusual things in science, art or literature, were interesting enough to divert my thoughts from cares of business. The paragraphs must not be too long, and must be on widely differing subjects to keep me entertained. Probably the contrast between the unusual and the previously stored-up impressions concerning any subject of knowledge may account for the interest thus awakened.’

I am glad to be working in such a long and worthwhile tradition. More on the long history of curious facts collectors, dating back to Pliny the Elder, will be published anon.