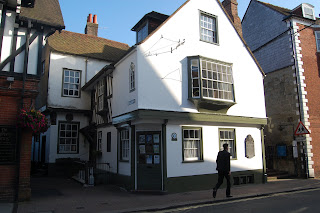 Bull House in Lewes, where Tom Paine lived from 1768 to 1773.
Now owned by The Sussex Archaeological Society, the building has been substantially
refurbished in the last year in preparation for the bicentenary of Paine' death in June 2009

What follows is an account of Tom Paine in Lewes and the various projects I was involved in that led to the resurrection of his memory in the town and further abroad. 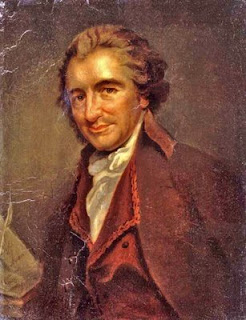 Born on the 29th January, 1737, the son of a corset maker in Thetford, Paine lived in Lewes whilst working as an Excise man (his first piece of political writing was a demand for increased wages), before meeting Ben Franklin in London and heading for America. Here he got involved in revolutionary activity and wrote the seminal book ‘Common Sense’ which was a major catalyst in the decision that the colonists made to declare war on England. It is said that he also had a hand in the drafting of the Declaration of Independence.
When he returned to England he produced ‘The Rights of Man’. As a result was vilified by the repressive Pitt government (he was burnt in effigy in place of Guy Fawkes for a number of years) and only narrowly escaped arrest before escaping to France. Initially he was hailed a revolutionary hero but when he spoke out against the decision to execute the French king he ended up in prison and narrowly avoided the guillotine himself. After languishing there for a number of years, he was eventually rescued and went back to America but by then he had become a forgotten man and died in poverty.

The radical William Cobbett went to America, dug up his bones and brought them back to England, where he planned to raise the money for a proper memorial. This never came about and Paine’s bones were scattered. Thus he was never laid to rest and his spirit is still abroad, an inspiration to radicals and writers of all ages.

‘Government, like dress, is the badge of lost innocence; the palaces of kings are built upon the ruins of the bowers of paradise.’ 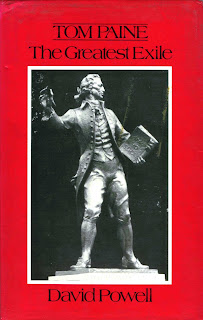 I knew nothing about Tom Paine before coming to live in Lewes in 1985. Shortly after my arrival, I saw in the nearby bookshop a Local Author promotion of a biography called ‘Tom Paine: The Greatest Exile’ [Croom Helm. London. 1985] by David Powell, which is still one of my favourite books. I was so impressed by David's book that I got in touch with him and thus began a friendship that lasts to this day. At that time in Lewes, Paine’s memory had been virtually forgotten.

While Paine was in Lewes, he was a member of a debating group called The Headstrong Club, which met regularly in an upstairs room at The White Hart, and David told me he had been trying for a number of years to revive it. I agreed to help him do that and, in very short order, the Club was re-launched on the 30th January, 1987,on the 250th anniversary of his birth, in the same room where the members had originally met. 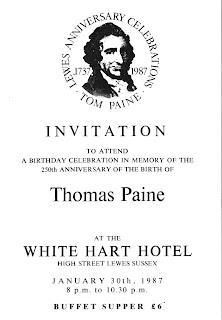 The opening speech was given by Bernard Crick, biographer of
George Orwell. David McTaggart, chairman of Greenpeace
International, who was the first guest to arrive that night [Greenpeace had their international HQ in Lewes for many years] and I remember his comment in the Visitor’s Book: ‘Just get on with it.’ I swear the spirit of Paine was in the room that night, such was the atmosphere.

The Club continues to thrive and has had many distinguished speakers over the years including Michael Foot, Tony Benn, Trevor Griffiths, Jack Shepherd and many others. 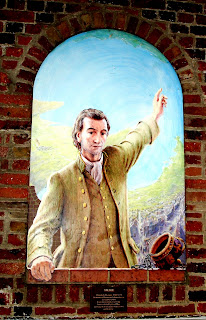 Other Paine spin-offs that resulted from the formation of the club were:

- the planting of a Tree of Liberty in the town, a copper beech that is now some 30-40ft high and still growing fast

the installation of a painting by Julian Bell of Paine, which is in the town's Clock Tower. Despite vandalism all round it, the painting, which is uncovered and set into the wall, has been left alone, except on occasion when some wag added a Dali moustache.

- the launch of a Tom Paine ale by our local brewery Harveys. A truly Headstrong brew. 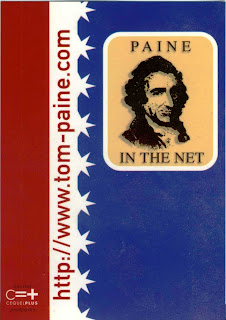 ‘Paine in the Net’ was the title of the first proper site for Tom Paine on the internet, which our company Cequel Publishing built and launched at the Jubilee Room at the House of Commons on July 4th 1996 – the first and possibly only time this great radical and writer had been celebrated in the House. Tony Benn MP was present as was Lewes’ then Conservative MP, the late Tim Rathbone.

It was a truly special affair designed to generate media attention for the site and to link Paine’s ideas and writings with the work of a number of campaigning groups - Charter 88, Liberty, the Campaign for the Freedom of Information and Demos - who were seeking to stimulate debate about democratic values in the digital age. (Unfortunately the site is no longer functioning and the URL is now used by a garden designer. No trace of it in the Internet archiving Wayback Machine site either). 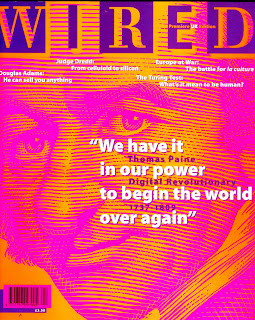 By chance or not, the British edition of the digital magazine 'Wired' was launched shortly afterwards, featuring Tom Paine on the cover, with an excellent article By Jon Katz entitled The Age of Paine, which claimed 'Thomas Paine was one of the first journalists to use media as a weapon against the entrenched power structure. He should be resurrected as the moral father of the Internet.'

‘There is nothing which obtains so general an influence over the manners and morals of the people, as the press; from that, as from a fountain, the streams of vice and virtue are poured forth over a country.' 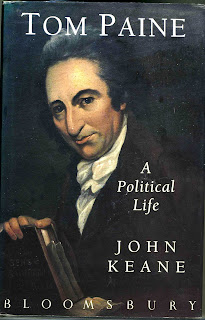 About the time we launched our ‘Paine In The Net’ site, a new biography Tom Paine- A Political Life by John Keane, Professor of Politics at Westminster University and Director of the Centre for the Study of Democracy was published and I had the pleasure of introducing at a public meeting in Lewes. Subsequently, Professor Keane and I met on several occasions with view to launching a political broadcast by Tom Paine on Channel 4. No luck.

Paine is subsequently celebrated in the town through and organisation called The Tom Paine Project which for several years held a ‘Revolution to Revolution Festival’.

'These are the times that try men's souls.’

Paine’s thoughts and ideas remain highly relevant to our time and age. Any journalist should know about him as Paine was a great stylist and thinker whose writing is compact, thoughtful and stirring. His words continue to have universal resonance.

WILLIAM BLAKE & TOM PAINE: Blake is linked to Tom Paine via the publisher Joseph Johnson, the first to commission Blake as a copy-engraver. Johnson's politics were of a radical persuasion and he cultivated a circle of like-minded people at weekly dinner parties above his shop. During the time of Blake's employment, guests included Joseph Priestley and the painter Henry Fuseli; slightly later came Tom Paine, Mary Wollstonecraft and William Godwin.

Peter Ackroyd, in his biography of Blake [Sinclair-Stevenson. London. 1995] writes: 'It has often been suggested that Blake was an intimate member of this radical circle, and he himself seems to have boasted of some acquaintance with Tom Paine. (There is a report that he warned the pamphleteer to leave the country at the height of the Jacobin scares of the 1790s.)' In fact, says Ackroyd, he only attended one of the dinners and his friendship with Paine and other is 'pure speculation.'

A marvellous play has come out of this pure speculation: ‘In Lambeth’ written by the British actor Jack Shepherd and starring Michael Moloney as Blake and Bob Peck as Paine. It was subsequently filmed for the BBC. Shepherd, an admirer of both Paine and Blake's, told The Times (11 July 1989): "I had this scene in my head: Mr and Mrs Blake naked up a tree reading Paradise Lost when their friend bursts in upon them. That's a true incident. I made the friend Tom Paine, escaping from the mob into this little paradise."

DYLAN & PAINE: My interest in Paine was revived recently by my discovery of the fact that in December 1963, shortly after the Kennedy Assassination, the young Bob Dylan was given The Tom Paine Award by a left-wing political group in New York (the previous recipient being Bertrand Russell) for his work in the Civil Rights movement. The occasion was controversial because Dylan appeared in his speech to sympathise with Lee Harvey Oswald. The whole episode is fascinating and is documented in some detail in Robert Shelton’s book ‘No Direction Home.’

TOM PAINE THE MOVIE: For many years Sir Richard Attenborough strove to raise the funds to make a major feature film on Paine from a script by the playwright Trevor Griffiths. At one of the most riveting of the Headstrong Club meetings, Griffith read from the script which was really first-class. The screenplay was published in 2005 ['These Are Times' by Spokesman Books in Nottingham.] The film was never made but in 2008, a two-part radio drama based on Griffths' filmscript was broadcast of BBC Radio 4.

THE STORY OF TOM PAINE'S BONES:

'I have no objection to that, but the farm will be sold and they will dig up my bones before they are half rotten.'
- Paine, aged 72, to Margaret Bonneville, who promised to bury him on his own farm.
‘Tom Paine died at 8am on 8 June 1809 and was buried two days later at his farm in New Rochelle. His concern over his fate after his death proved to be justified.'

So writes David Powell who, in common with many other Paine authors, told the story of how, 'eight years later,the radical journalist William Cobbett came to America to escape the threat of imprisonment in England, following the suspension of Habeus Corpus. He stayed there for two years and, when planning his return, became determined to dig up Tom Paine' bones and take them back with him to England, in order to 'effect the reformation of England in Church and State. 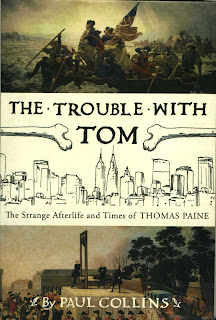 '
'Thus it was in October 1819, at dead of night, that Cobbett rode over to New Rochelle and began disinterring the body. Some locals, noticing the lights around the grave, raised the alarm but, before a posse could be formed, Cobbett was on the road to New York, where he boarded a packet ship bound for Liverpool. Accounts vary as to what happened on his return.'

We now are fortunate to have a much more definitive story of the fate of Tom Paine's human remains thanks to the brilliant 'The Trouble with Tom: The Strange Afterlife of Thomas Paine' by Paul Collins [Bloomsbury. 2006] in which the author travels widely in the US, France and Britain to try and track down every fragment of Paine's body which was, in fact, widely dispersed. This is now the definitive account of the story to date and makes fascinating reading.

TOM PAINE IN TIBETAN:
A little reported fact, which confirms the global and ongoing influence of Tom Paine, is the fact that 'Common Sense' has been translated into Tibetan by Lhasang Tserling and Perma Bhum.

'A History of Ending Poverty' by Gareth Stedman Jones. The Guardian July 2 2005