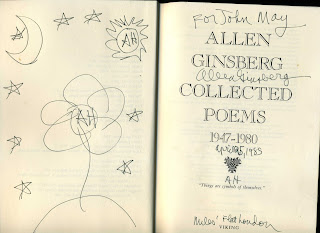 This is the first publication of the original text of an interview I did with Allen Ginsberg (1926-1997), on April 25, 1985 in Miles' flat in London. He was in England in connection with the publication of his Collected Poems [above]. At the time, I was hoping to place the piece in The Face or the NME but neither materialised. It is great to be able to finally get it 'into print' twenty years later in an electronic form.

A Prophet on the Electric Networks

'The received image of Allen Ginsberg is that of the wild gay poet, hair and beard bristling, reciting 'Howl' in the voice of Biblical prophet on the steps of the Pentagon.

"I knew about William Blake when I was a kid - 'The Tiger and The Lamb' - then when I was 22, I had an odd visionary experience related to Blake, like a psychedelic experience but without drugs, on the sixth floor of a tenement in Harlem."

There's a loud buzzing and Ginsberg picks up the phone. Then he realises its the intercom. He goes to answer the door. The correspondent for the Daily Telegraph has arrived early. Ginsberg settles back on the sofa, rests his brain on his hand, and continues.

"I just had some auditory hallucinations of his voice, sounds like my voice now, quite deep, grounded and probably just like a projection of my latent physiology. That confirmed to me some kind of poetic transmission of wakefulness, a sense of the vastness of the universe, of all the intelligence that went into the universe."

We're in the L-shaped London flat of Miles, whose currently writing the Ginsberg biography, just north of [the office of] The Face and the Beat Master is in full flight.

"As the closet Stalinism of the neo-Conservatives emerges - mainly their centralisation of authority and their invocation of secret police powers, as in the President unleashing the CIA for domestic surveillance or Thatcher misusing MI5, or crackdowns on gays, the siezure of books, the crackdowns on the municipal decentralised governments here in England in an attempt to grab power - as that became more obvious, the awareness of it on the part of the people who are abused or who feel that unconsciously, became more overt, more palpable.

"Something you may not have read about in the papers is that across America there is a new wave of student movement activity on the issues of South African investment, US intervention in Central America and the domestic activities of the CIA."

A decade after Vietnam, in the age of video pop and AIDS, that war is back on the covers of Time and Newsweek and Ginsberg is still in the thick of it. On March 18th, he was arrested along with 400 students when they staged a 'citizen's arrest' of a CIA recruiter, working inside the University of Columbia campus, for drug dealing and murder.

He comments: "This unexpected resurgence of campus activism may or may not be long-lasting but it's an odd signal that not everybody's asleep and that there's actually an active sense of something wrong."

He takes off his glasses to rub his eyes and you notice that one of them is lazy and half closed, the other fully open and penetrating. His mouth is also kept closed at one side and he delivers his speech from the other corner in a resonant voice, honed by a million readings around the globe.

This guy travels. He's just back from China, he's promoting his 'Collected Poems' in London and doing readings in Oxford and Cambridge, then it's on to Vancouver for two weeks then back to New York, to the apartment in the Bronx he has lived in for over 20 years, to work on a book of Collected Prose.

He divides his time between this main New Yawk street base and the Naropa Institute ("the first deep Buddhist university in the West, run by a Tibetan lama") in Boulder, Colorado ("A clean and funky shopping mall yuppie town with not many black people, on the edge of the front range of the Rockies, twelve miles from the Rockwell Corporation's nuclear bomb-trigger plants at Rocky Flats.")

There he teaches: a five-term course in Blake's prophetic books, year after year, line by line; the literary historuy of the Beat Generation (1944-64); a survey of English literature from 'Beowulf' to Gregory Corso; writing itself, analysis of thought forms and the relation between meditation practice and poetic mind.

He says: "I am a poet and my job is to learn the poetics of different cultures. My own poetry is to do with understanding the nature of my mind, or mind itself. Consciousness. That's why I was so interested in dope and travel."

Ginsberg's story of his China trip along with three new poems was syndicated by UPI. So how did the Chinese react to Beat?

"The lady who was my host at Fu-Dang University in Shanghai had been educated in physics and was a specialist in the molecular structure of surfaces. During the Cultural Revolution she was locked out of her office and made to clean latrines, kicked around so she walks with a limp. Today she's a member of the Central Committee.

" 'I Saw the Best Minds of My Generation Destroyed by Madness' (the first line of 'Howl') is considered a giant anthem for all the people who got screwed up during the Cultural Revolution in the Sixties. Its very popular. The Junior/Senior anthology of American Literature Volume 2 (used in Chinese schools), contains fifty pages of 'On the Road' and thirty pages of Norman Mailer's 'The Executioner's Song.' "

We talk about poets past. Ginsberg is currently enthusiastic about Christopher Smart, whose epic poem 'Rejoicing' was written in Bedlam at the tim of Dr Johnson and not published until 1920, and Edward Carpenter "who wrote long-line poems in the style that I write. He liberated E.M. Forster. Forster read the eulogy at his death. Carpenter went to visit Whitman, went to India, wrote many books on travel and the joy of sex. He was one of the first Englishmen to come out in the 1890s and he got away with it."

He shows me an old volume of Carpenter's 'Towards Democracy.' While he's on the phone, I look at the pencilled inscriptuion. 'Purchased at the Gotham Book Mart in New York on August 6th, 1966, the date of a major anti-Vietnam demonstration.'

Ginsberg's father Louis was a published poet and first-generation immigrant but Allen says he never primarly thought of himself as a poet until he met Kerouac.

"Kerouac's thing was a very simple matter: the discovery of the actual physical body of the nation and the exploration of the archetypal social faces and the vernacular and the slang and the native wisdom, as distinct from government official wisdom."

Then you remember again, this guy drove with Neal Cassady, was crowned King of the May in Prague in 1965, was at the New York's World Fair in 1940, in Havana with Cab Calloway in 1953, journeying on Amtrak with Hart Crane on the brain, in Guatemala, down in Times Square c. 1945. He's been a copy boy and a merchant marine.

By this stage of the conversation the questions are multiplying. Time and space have contracted to a pinhead as Ginsberg explains the Buddhist rules for life. The Daily Telegraph correspondent is scribbling away furiously on the bean bag behind me. So there was only one thing left to do. I had to ask about the Bomb.

"First of all, I don't think there will be a nuclear diaster, simply because I don't think the entire world is going to voluntarily commit suicide. Individuals might do sometimes but en masse it would take a wave of suicidal anger sweeping around the world to set off a war like that.

" The absoluteness of the Bomb imposes a kind of mythological insight on everybody. They have to understand certain basic things about their own agression in order to survive, so that anxiety can be transformed into wisdom. That is the traditional Buddhist way - turn shit to roses. A more polite Chinese term is turn waste to treasure. It's alchemy - turn lead to gold. Alchemise your experience by seeing pain as some manifestation of insight or wisdom rather than something to be avoided and not thought about."

I wrapped my raincoat around me and headed for the street.'

I sent the piece to Allen on 11 June 1985 and received a postcard from him sometime later (date undecipherable). The picture on the front was a photo of Ginsberg taken by William Burroughs in 1953.

Dear John May: Thanks for..sending Richard's and your essays. A few mental typos: my apartment is in Manhattan Lower East Side, (2) I taught 'Seafarer' to Corso, (3) Fudan not Fudang, (4) Smart's Rejoice in the Lamb (5) that wasn't really Calloway Cuba 1953 but a pimp- (something) fellow drest like Cab. Otherwise accurate and excellent gist of our conversation. Hope you print it somewhere. See you in Time - or US or England or the Moon - Allen Ginsberg USA