THE BALLAD OF RAMBLIN' JACK ELLIOTT 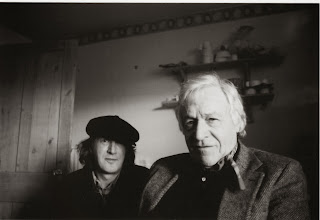 This is a true story about a true legend – Ramblin' Jack Elliott – and how our paths crossed, and what it led to.

Earlier this year I’m yakking with old friend Barry E., manager of The Borderline, one of London’s best music clubs when he happened to mention Ramblin’ Jack Elliott was coming to town to receive a Lifetime Achievement Award at the BBC Radio 2 Folk Awards. He gave me the number of the PR man involved and, to cut a long story short, one cold Saturday I’m in the Thistle Hotel at the Barbican, meeting Jack and his daughter Aiyana and conducting a thoroughly enjoyable interview with the man himself – a direct link with Woody Guthrie and Bob Dylan. Sold the piece to The Telegraph, who ran it the following Saturday:

You can read the full text of this interview and listen to the audio here:
http://hqinfo.blogspot.co.uk/2007/06/ramblin-jack-revisited.html 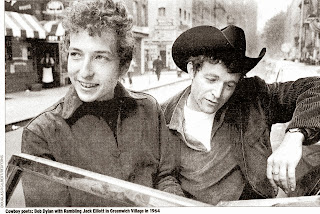 I needed to find a picture of Jack and this led me to uncover a 'lost' set of Bob Dylan pictures, shot in 1964 by Douglas R. Gilbert, which were later published in a book that I worked on. Here is one of them: Dylan and Ramblin' Jack in Greenwich Village.
See the full story here:
http://hqinfo.blogspot.co.uk/2005/09/lost-dylan-photos.html

Now on the day of the interview, I’m heading back to my gaff to get my stuff ready to go to London when I bump into Angela, a near neighbour, journalist for many years, who asked me what I was up to, said I was off to do an interview, she asks who I’m interviewing, I say Rambling Jack Elliott – and she gasps, takes a step back and repeats that name with a tone of colossal surprise. Turns out he’s one of her all-time faves and that she owns a rare record of his. As she lives a few doors away, I pop round to see, sure enough, a rare piece of vinyl called Kerouac’s Last Dream which Jack recorded in Germany in 1980. So said I would take it to London and get it signed for her which I duly did. On my return, gave it back to her and there the story might have ended. Nice coincidence.

But then the following Thursday I get a phone call from Arthur Brown (the legendary God of Hell Fire), who lives in our small town. Says he thought I might be interested in coming to see a gig the following Monday down at one of our local bars called the Lansdown Arms. Whose that I said. Well, it’s someone I don’t know whether you’ve heard of, his name is Ramblin’ Jack Elliott. I fell off my chair. You’re joking. You must be joking.

Turns out Jack decides to an extra gig before heading home and had tried to get a gig in Brighton at The Greys, well-known music bar, but they were booked. By chance Arthur phones The Greys about something else and the manager happens to mention it to him so Arthur gets on to Ben at the Lansdown and the deed is done.

So I speak to Ben, offer my services in whatever way I can and Ben says, he needs to find some accommodation. So this is where the story gets stranger because the aforementioned Angela runs a local B&B so you can imagine her surprise when I phoned her and said Ramblin Jack is coming to town – and he needs a place to stay.

So fast forward a few days and Jack and Aiyana arrive in the middle of a snowstorm and we give them the scenic drive round out little ancient town with its castle, trying to find Jack a cap. 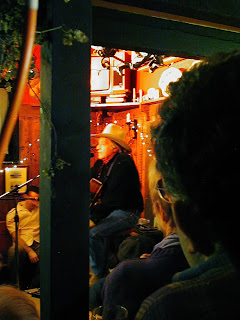 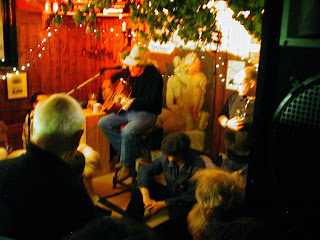 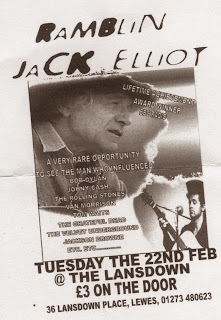 The gig that night was electric, a tiny bar, absolutely packed to the gills, no smoking in deference to Jack, a bare-board stage in the corner, hip young folk sitting at the foot of the stage gazing up in a wonder at this legendary cowboy poet who’d just happened by chance to blow into town possibly for this one-time only. It was like being transported back to Greenwich Village in the early 1960s.

The landlord’s dog wandered onto the stage and sat at Jack’s feet. At one point, in the middle of the performance, a guy rushed in shouting at the top of his voice: Jack, Jack I got some pictures which I’ve been waiting to give you for 25 years but I’ve been stuck on a train from Hastings for five hours and I’ve only just made it. Everyone gave way for him to reach the stage, they chatted. It seemed like a natural thing to happen. It was that sort of a night

Now Angela was living with Mike whose birthday (coincidentally) happened to be that night. Mike was very sick but he managed to get down there and had a seat of honour close to the stage. Next morning I went round for breakfast to find Jack and Mike yakking like ninepins, having discovered a mutual interest in horses and boats amongst other things. It was the kind of conversation that you wished you could record, during which Jack recounted the story of his doctor father’s patients in New York, which included a woman who owned a gorilla that she slept with until it got too big and had to be sold to circus. Stories also about his first rodeo ride. So all in all a magical time.

Sad to say, Mike, a fine and wonderful man, George Bernard Shaw afficianado and look-alike, passed away a relatively few weeks later. I’ll always remember Jack and Mike yakking, Mike looking full of energy and ideas and arguments as he always was til the last days.

Sometimes it’s as if a string of coincidences like this is somehow meant to be.

PS: Thanks to Hank Reineke who was kind enough to allow me to consult his excellent three-part profile of Jack published in 'The Bridge'.

NEW: Check out Peter Culshaw's brilliant piece Midnight Cowboys, on a 2,000 ml train ride across Canada with Ramblin Jack, Tom Russell and a whole posse of other cowboy poets and singers.
at 11:36 am