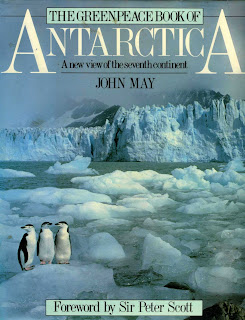 Antarctica is a subject close to my heart, having written one of the first books on the subject by someone who had never been there – The Greenpeace Book of Antarctica: A New View of the Seventh Continent' (Dorling Kindersley.1988).

The foreword was by the late, great Sir Peter Scott, son of the great Antarctic explorer and a leading world conservation figure.

It was early 1987 and Greenpeace International had their offices a few minutes down the road from my house. I had already done one project on the Star Wars weapons programme for them and had started working more intensively with them after Chernobyl.

The publisher Dorling Kindersley had come to see Greenpeace about doing some kind of green encyclopaedia with their name on it. That didn’t fly but it led to a two book contract – for a picture book on Antarctica followed by an official history of Greenpeace. Both were very successful projects.

The Antarctic book was hairy. I started work in January 1987 and I think I had four months to conceptualise the book, find all the pictures and write all the text. At that time I knew very little about Antarctica – virtually nothing.

So began my education: at the library of the Scott Polar Research Institute, with the head librarian Bob Headland, and at the headquarters of the British Antarctic Survey. I was fortunate indeed to meet Charles Swithinbank, who was I believe the first career scientist to have spent his whole working life in the Arctic and Antarctic. His involvement certainly opened all the doors for me.

The book we produced, with a crack designer (Alex Arthur) and able producer (Jane Laing) at DK, and Ian Whitelaw and Tanya Seton at GP Books, looked really beautiful and was the first ever popular encyclopaedic work on Antarctica for the general public. It was published in large quantities and many languages around the world and was the biggest selling Antarctic book before David Attenborough’s ‘Life in the Freezer’ eclipsed our sales. 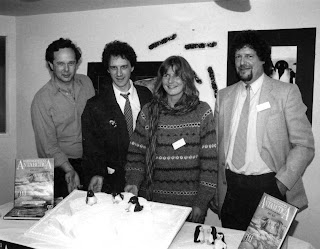 
Now the majority of literature in the Antarctic is dominated by scientific papers and studies on the one hand and personal accounts of polar exploration on the other. The strangest of these is 'Alone' by Robert Peary, who set himself the task of doing something that no-one else had ever done before – live in a little hut on his own. He went bonkers of course and was rescued (I can’t remember the details).

I remember that book in particular because I’d just read it in the weeks before the great Hurricane hit Lewes in October 1987. Our little family was camped out in the front room with candles and the wind whipped and screamed around the house, cars outside were rocking as if in one of those scenes from Close Encounters, giant trees were being blown over, and for the first time I could imagine what being in a tent in Antarctica might be like.

Our book was innovative because we had some of the first available computer maps (crude indeed, printed on pen plotters) and published the first satellite pictures. We had some of the first underwater Antarctic shots and generally tried to make the book as scientifically up to date as we could. It included a history of Antarctic bases and exploration with a section on Greenpeace’s own campaigns in the region which, I believe, led in time to many beneficial developments, not least the continued independence of Antarctica under the Antarctic Treaty agreements.

How things have moved on. The digital revolution has transformed Antarctic studies. There are now detailed interactive Antarctic atlases. Climate change studies have accelerated in the region, tourism has become established, new dinosaur fossils have been found and there is a greater public awareness of this extraordinary continent due to Attenborough’s masterly series and other tv docs.

Thus our book, now out of print but still available second-hand and still warmly recommended on many Antarctic booklists, can still be enjoyed for its photos - main contributors being Doug Allan, Colin Monteath and the legendary Eliot Porter - the beautiful wildlife illustrations of Martin Camm and much of its basic information but be aware that there have been spectacular scientific discoveries in the last 15 years.
Time for an update!

All of these memories were triggered by the discovery of The Big Dead Place. This is a dark inside view of the US McMurdo Base, the largest of the nation’s three outposts on the continent. The site is certainly a first in Antarctic history and gives a chilling picture of a contained and constantly monitored world which could have been written by Martin Cruz Smith and is rather frightening. The Antarctic Dream is over it seems.