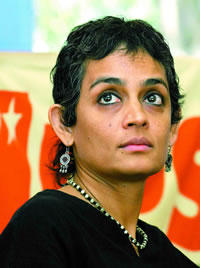 Arundhati Roy is one of the bravest and brightest writers on the planet. She has consistently and courageously spoke out in India and abroad about the pressing and dangerous issues of our time with little regard to her own safety. Her comments here are taken from a long interview with S. Anand, published in Outlook India.

'It’s impossible to pronounce knowledgeably on Kashmir after just a few short trips. But some things are not a mystery. Hundreds of thousands have lost their lives in this conflict. Both Pakistan and India have played a horrible, venal role in Kashmir. But among ordinary Kashmiri people, Pakistan still remains an unknown entity — and for that reason it’s become an attractive idea, an ideal even, conflated by many with the yearning for ‘azaadi’. It’s ironic that a country that is a military dictatorship should be associated with the notion of liberation. The ugly reality of Pakistan is not something that most Kashmiris have experienced. The reality of India, however, to every ordinary Kashmiri, is an ugly, vicious reality they encounter every day, every ten steps at every check post, during every humiliating search. And so India stands morally isolated — it has completely lost the confidence of ordinary people. The Indian army is not in Kashmir to control militants, it is there only to control the Kashmiri people.'

And the prognosis for the War on Terror?

'Clearly, it’s spreading. Empire is overstretched. The Iraqis have actually managed to mire the US army in what looks like endless, bloody combat. More and more US soldiers are refusing to fight. More and more young people are refusing to join the army. Manpower in the armed forces is becoming a real problem. In a recent article, the remarkable un-embedded journalist Dahr Jamail interviews several American marines who served in Iraq. Asked what he would do if he met Bush, one of them says: “It would be two hits — me hitting him and him hitting the floor.” It’s for this reason that the US is looking for allies — preferably low-cost allies with low-cost lives. Because the media is completely controlled, no real news makes it out of Iraq. The world knows only a fraction of what’s going on. The anger emanating out of Iraq and Afghanistan is spreading wider and wider.... It’s a deep, uncontrollable rage that you cannot put a PR spin on. America isn’t going to win this war. '
at 5:12 pm

I have read the interview. I don't find anything wrong with what you say about Arundhati Roy. But if I may, please take a look at my post. Her comments about Kashmir are pure nonsensical. I know you won't take my word for it. Sure! But don't take her word for it either. Why? Because I was born and brought up in Kashmir. And my article does bring to light her lack of knowledge about Kashmir. And much more. Please, if you can spare some time, do read my article about this particular interview.