Inside Dope by Dick Tracy 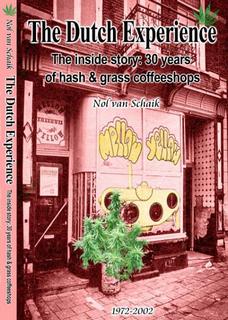 The first coffee shop or 'tea house' as it was then known was opened in Amsterdam in 1972 by Wernard Bruining and friends. at Weesperzijde 53 in Amsterdam, in a squatted bakery shop and called 'Mellow Yellow.' Nol van Schaik, is the owner of three successful coffeeshops in Haarlem, and the author of ‘The Dutch Experience’ , a history of this unique social experiment. Van Schaik opened the Dutch Experience coffeeshop in Stockport, England with Colin Davies, who is now serving a three-year sentence in a UK prison as a result. [Bruining’s paper ‘How to Avoid Criminalisation of Euro Cannbis: Learning from the Dutch Experience’ can be read here].

COFFEE SHOPS UNDER THREAT
According to a Reuters report (May 21st 2005), a new scheme set up by the Dutch Justice Minstry is being piloted in Maastricht, whereby people not registered in the Netherlands will not be allowed into coffee shops, in an effort to cut drug tourism.

The number of coffee shops has been cut to 754 nationwide in 2003 from 1,200 in 1997, according to the latest figures available from The Trimbos Institute , the Netherlands Institute for mental health and addocition studies.

According to Dutch Coffee Shops Facing Pressure, Greater Controls (11 March 2005) it is thirty years since the Dutch government pragmatically allowed so-called coffee shops to sell marijuana to adults even though Dutch law continues to make cannabis sales illegal. But pressure from the US and the European Union on the Dutch government has seen a crack-down in recent years.

It quotes August de Loor, an independent drug policy advisor to the government, who told 'The Independent': ‘In the past four years things have started to change and there is a more conservative approach. The control of coffee shops has become much more strict. The police are checking up on them more and there is much more strict interpretation of the rules. More and more mayors are banning coffee shops from their cities. I think in four or five years' time there will be no more coffee shops left in Holland,' he predicted. 'We have a conservative government at the moment but it's nothing to do with the left or right. It's a moral thing. It's a sign of the times.'
THE DEATH OF THE PUB?
According to 'Calling Time' by Paul Kingsnorth (23 July 2005), more than half the villages of England now have no pub, for the first time since the Norman conquest. The remaining rural pubs are closing at the rate of six a week. In 1900, there were more than 6,000 breweries in the UK. Only 500 are left. 33 have closed since 1990. Overall, 20 pubs close every month. Half of those that remain are in the hands of pub corporations.

MAGIC MUSHROOMS MADE CLASS A
The Transform Drug Policy Foundation has condemned the change in the UK law which gives fresh magic mushrooms the same legal status as heroin and cocaine. On July 18 th 2005, fresh magic mushrooms moved from being completely legal to possess, sell and consume, to being a Class A drug. This means that possessing magic mushrooms will be punishable with up to 7 years in prison, and supplying them punishable with an unlimited fine and up to life in prison. The change follows the rushed enactment of the Drugs Bill in the ‘wash up' week before the General Election.
See: Talk To Frank ( a government drug info site) for more details.
See: Full details of the new Drugs Act 2005

WAR OF THE WEED
Famous as the home of some of the biggest trees in the world, The Sequoia National Park has now got a new claim to fame – it has the greatest area of land being illegally cultivated for marijuana of any national park in the US. Large areas have become no-go zones for visitors and rangers as drug lords are cultivating pot on an agribusiness scale.

According to ‘War of the Weed’ by Joe Robinson in the LA Times (August 9th 2005): ‘Pot plantations have surged as Mexican-affiliated drug cartels adapt to increased border security since 9/11 and cash in on the rising price of high-grade weed, now more profitable than methamphetamine, according to investigators.’ The authorities have discovered giant farms, such as a 79,000-plant haul in Tulare County valued at $360 million.

’The cartels dispatch their troops down isolated roads in steep terrain in February and March’, says Robinson. ‘Growers bushwhack a couple of miles into the woods, carrying 25-pound tanks of propane, 50-pound sacks of fertilizer, pesticides and hoes. Periodic food drops supplement poached animals. The farmers clear the understory of foliage, leaving a canopy for camouflage; they cut terraces in the slopes, run irrigation hoses from creeks and rivers for miles and carve out a sprawling camp. For every five acres of marijuana, a grower will develop 180 acres of wilderness.’

A Black Hawk helicopter unit was used and discovered three major ‘gardens’ but was reassigned to the Mexican border this year. (The U.S. government has sent 60 helicopters and about $4 billion to Colombia since 2000 to eradicate coca farms). The special agent at Sequoia National Park requested $200,000 annually for Operation No Grow, a five-year plan to eradicate marijuana farms in the park but he got an extra $45,000.

Footnote: Dick Tracy wrote 'Inside Dope' - the first and only nationally published column on drugs in a British newspaper before or since - in the 'New Musical Express' from approximately 1976-1979.
at 10:51 pm