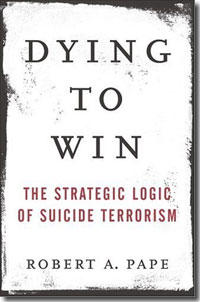 What follows is an extract from 'The Logic of Suicide Terrorism' by Scott McConnell, published in the American Conservative magazine. Worth reading the full interview.

Last month, Scott McConnell caught up with Associate Professor Robert Pape of the University of Chicago, whose book on suicide terrorism, 'Dying to Win', is beginning to receive wide notice. Pape has found that the most common American perceptions about who the terrorists are and what motivates them are off by a wide margin. In his office is the world’s largest database of information about suicide terrorists, rows and rows of manila folders containing articles and biographical snippets in dozens of languages compiled by Pape and teams of graduate students, a trove of data that has been sorted and analyzed and which underscores the great need for reappraising the Bush administration’s current strategy. Below are excerpts from a conversation with the man who knows more about suicide terrorists than any other American.

Your new book, 'Dying to Win', has a subtitle: The Logic of Suicide Terrorism. Can you just tell us generally on what the book is based, what kind of research went into it, and what your findings were?

Over the past two years, I have collected the first complete database of every suicide-terrorist attack around the world from 1980 to early 2004. This research is conducted not only in English but also in native-language sources—Arabic, Hebrew, Russian, and Tamil, and others—so that we can gather information not only from newspapers but also from products from the terrorist community. The terrorists are often quite proud of what they do in their local communities, and they produce albums and all kinds of other information that can be very helpful to understand suicide-terrorist attacks.

This wealth of information creates a new picture about what is motivating suicide terrorism. Islamic fundamentalism is not as closely associated with suicide terrorism as many people think. The world leader in suicide terrorism is a group that you may not be familiar with: the Tamil Tigers in Sri Lanka. This is a Marxist group, a completely secular group that draws from the Hindu families of the Tamil regions of the country. They invented the famous suicide vest for their suicide assassination of Rajiv Ghandi in May 1991. The Palestinians got the idea of the suicide vest from the Tamil Tigers.

So if Islamic fundamentalism is not necessarily a key variable behind these groups, what is?

The central fact is that overwhelmingly suicide-terrorist attacks are not driven by religion as much as they are by a clear strategic objective: to compel modern democracies to withdraw military forces from the territory that the terrorists view as their homeland. From Lebanon to Sri Lanka to Chechnya to Kashmir to the West Bank, every major suicide-terrorist campaign—over 95 percent of all the incidents—has had as its central objective to compel a democratic state to withdraw.

That would seem to run contrary to a view that one heard during the American election campaign, put forth by people who favor Bush’s policy. That is, we need to fight the terrorists over there, so we don’t have to fight them here.

Since suicide terrorism is mainly a response to foreign occupation and not Islamic fundamentalism, the use of heavy military force to transform Muslim societies over there, if you would, is only likely to increase the number of suicide terrorists coming at us.

Since 1990, the United States has stationed tens of thousands of ground troops on the Arabian Peninsula, and that is the main mobilization appeal of Osama bin Laden and al-Qaeda. People who make the argument that it is a good thing to have them attacking us over there are missing that suicide terrorism is not a supply-limited phenomenon where there are just a few hundred around the world willing to do it because they are religious fanatics. It is a demand-driven phenomenon. That is, it is driven by the presence of foreign forces on the territory that the terrorists view as their homeland. The operation in Iraq has stimulated suicide terrorism and has given suicide terrorism a new lease on life.

Dr. Robert Pape is Associate Professor of Political Science at the University of Chicago specializing in international security affairs. His publications include Bombing to Win: Air Power and Coercion in War (Cornell 1996), "Why Economic Sanctions Do Not Work," International Security (1997), "The Determinants of International Moral Action," International Organization (1999). His commentary on international security policy has appeared in The New York Times , New Republic , Boston Globe , Los Angeles Times , and Bulletin of Atomic Scientists , as well as on Nightline , ABC News with Peter Jennings, and National Public Radio . Before coming to Chicago in 1999, he taught international relations at Dartmouth College for five years and air power strategy for the USAF's School of Advanced Airpower Studies for three years. He received his Ph. D. from the University of Chicago in 1988 and graduated summa cum laude and Phi Betta Kappa from the University of Pittsburgh in 1982. His current work focuses on the effect of technological change on conflict and cooperation among major powers and the theory and practice of suicide terrorism.

Wsahington Post: A Scholarly Look at Terror Sees Bootprints In the Sand
at 2:02 am