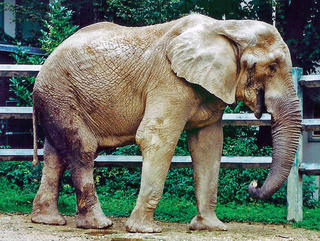 Calimero, a male African elephant in a zoo, has learned to imitate the sounds made by female Asian elephants he was housed with. (Photo by Angela S. Stoeger-Horwath, University of Vienna)

An expert on marine mammal communication from the Woods Hole Oceanographic Institution in the US has confirmed that elephants have the ability to learn new sounds by imitating what they hear - a process known as 'vocal learning'. This uncommon ability was previously believed to be limited to songbirds and parrots, bats, cetaceans, and pinnipeds (such as seals and walruses).

WHOI biologist Stephanie Watwood was unexpectedly contacted by two elephant researchers who were both puzzled by strange sounds that their elephants were making. One called Mlaika, at the Amboseli Trust for Elephants in Kenya, appeared to be imitating the sound of trucks; the other, a male African elephant named Calimero, living in a zoo with female Asian elephants, was mimicking the chirping calls of his female companions. Watwood confirmed the elephants' previously unknown vocal talents.

Although elephants do make loud trumpeting calls, most of the sounds made by adults are low-frequency rumbles, below the human range of hearing. Like whales and dolphins, elephants have strong social structures and they use these sounds to communicate over many kilometres.

Watwood's analysis confirmed that the sounds that Mlaika and Calimero were making did not exactly match the trucks and the Asian elephants but it was clear that they were trying hard to mimic them to the best of their ability.

"Truck sounds are very low frequencies, well within the range of sounds that elephants produce,” Watwood said. “The truck sound that Mlaika imitated was a lo-o-o-o-o-ong sound—much longer calls than she normally would make.
"Calimero is much bigger than an Asian elephant female and so had a lower voice; he called at a lower frequency than females would.But he put more of his vocal energy in frequencies that were much higher than a typical elephant of his size would make. He was doing his best to sound like a smaller elephant.”