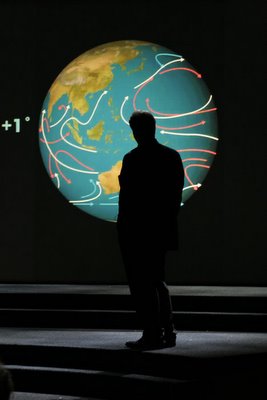 The subsequent story of Gore's rise to Vice President and his subsequent crooked defeat by Bush is well known and part of the historical record. He was widely criticised during the campaign for the formality and woodenness of his public persona. Yet in recent years his star has risen again, partly due to a dogged one-man tour of cities and towns across America. in which he has been delivering a powerful audio-visual presentation about global warming.

A full description of this presentation can be found at: 'Al Gore at the TED 2006 conference'. It begins:

TED organizer Chris Anderson introduces Al Gore as the president of an "alternate universe this close to our own." Vice President Gore takes the stage, unfortunately not naked to the waist, beating drums. But he does open with a good joke:' I am Al Gore. I used to be the next President of the United States of America.' [laughter, applause] 'I don't think that's funny'.

'Gore's talk is a slideshow of images, designed to help us think about "a planetary emergency, a climate crisis". He quotes the old saw that the Chinese character for crisis includes signs for "danger" and "opportunity" and suggests that we have the possibility of making the 21st century the "Century of Renewal"

Read one reaction to his presentation, an Editorial at buzzflash.com entitled:
'If Al Gore Falls in the Forest and No One is There To Hear Him..'

Digest: 'True transformations in politics are as rare as palm trees in the Arctic Circle. But Al Gore is that palm tree. On Martin Luther King Day, Al Gore took us to the mountaintop and allowed us to view the desecrated landscape of Constitutional rubble that the Bush Administration has spread across America. Gore has, for the last three years, been a prophet of saving our democracy and restoring out Constitution. Al Gore isn't just bringing the truth to the Bush Administration. He is bringing it to a Democratic establishment which has been patriotically compromised and Constitutionally corrupted by their personal sinecures and commitment to their Senate positions, rather than their commitment to our Constitution. This is Al Gore day on our BuzzFlash alerts, because Al Gore has the temerity to tell the truth with passion and alarm -- and document his assertions every step of the way. Gore is the real thing, someone who went through a personal crisis, traveled to the mountaintop, and saw the light. ' 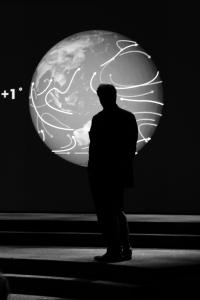 Footage of Gore's tour has been woven into a global warming documentary, directed by Davis Guggenheim [94 Minutes, color] called An Inconvenient Truth Reviewed in the Sundance Film Festival catalogue by Caroline Libresco as follows:

'Extreme poverty, intractable wars, virulent disease, hatred of all stripes–these are a few of the scourges we live with today. And yet global climate change trumps them all; for if it's not addressed, all life on the planet will be devastated, regardless of geography, class, race, or creed. 'The Inconvenient Truth' is the gripping story of former Vice President Al Gore, who became interested in this startling issue while at college 30 years ago, and now devotes his life to reversing global warming. Traveling the world, he has built a visually mesmerizing presentation designed to disabuse doubters of the notion that climate change is debatable. The heart of Davis Guggenheim's film is this elegant multimedia lecture itself, where Gore indisputably correlates CO2 emissions with exponentially rising temperatures, already responsible for dramatic climactic shifts like ice-cap melting, drought, and rising sea levels. Interwoven with this riveting public address are intimate moments revealing the poetic, searching side of Gore as he struggles to define his purpose in the aftermath of the 2000 election. This is activist cinema at its very best, for it serves to popularize and demythologize a problem long obscured by those most threatened by the solution. With humor and searing intelligence, Gore outlines crucial steps we must take to avert impending disaster and proves that inaction is no longer an option–in fact, it's immoral.

Read review of the Sundance screening at Treehugger, one of the smartest environment sites on the web.

A full-length video of a talk Gore gave towards the end of 2005 at the NetImpact conference at Stanford
can be heard and seen here.

There is also a web petition aimed at the UN to try and institute a Global Environmental Ambassador and suggesting that Al Gore should be the first. Sign up here if you agree.
http://www.thepetitionsite.com/takeaction/618253462?ltl=1131811764

Gore is also in the headlines on two other fronts:

1. On 24th Feb, environmental activists from the Computer TakeBack Campaign, a national coalition of environmental organizations, descended on Gore's Nashville office in an attempt to convince him to use his position on the board of Apple Computers to get the company to recycle their products. [They have already persuaded Hewlett-Packard and Dell to support producer take-back of toxic discarded products carrying their brand names.]

"The iLife isn't quite as harmonious as it seems. Lurking underneath Apple's beautifully designed digital music players and computers are poisonous chemicals like lead and mercury that can cause birth defects and disabilities. When the millions of Apple's obsolete computers and other electronic products hit the landfills and incinerators, millions of pounds of toxic lead and other highly toxic materials will be dumped into our air, land, and water."

2. Also this month, Al Gore’s Current TV - a news network for young adults which Gore co-founded - is facing two lawsuits over its name - from Maryland-based Current Communications Group, a provider of broadband Internet services, and Minnesota Public Radio. Both parties claim that they made priopr registartion of the Current trademark. A statement from Current TV noted, "We know of no consumers who confuse us with Minnesota Public Radio, and we can't imagine that anybody ever would."