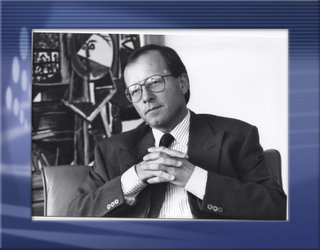 Stephan Schmidheiney is not a name known to many, certainly not to me before May 1992, when I interviewed him in London on the eve of the Rio Earth summit, at which he led the Business Council for Sustainable Development - an organisation he funded and directed - that succeeded in having a big influence on all aspects of the Rio process. As a result, this Swiss billionaire has ever since been seen (or promoted) as an enlightened businessman with a global reputation for pushing forward enlightened messages and policies, enouraging the corporate community to become more sustainable and ecologic. And to have invested in such enterprises himself. If not Bob Geldof, then certainly a man with a mission and deep pockets to further his aims, with the ear of the Presidents, CEOs, the World Bank and other global leaders - including Bono no doubt. As we shall see in Part 2: things are not always what they seem. But here to begin with is the profile of Schmidheiny and his views I wrote, as part of a larger pre-Rio piece entitled 'Business As Usual' for The Indepedent on Sunday (published 31 May 1992).

The Schmidheiny dynasty began in the late nineteenth century with Jacob, a shoemaker's son. In 1866, Jacob bought Heerbrugg castle and the surrounding area in eastern Switzerland and built a weaving mill and a brickworks. Four generations later, an empire has been created that forms an important part of the Swiss economy.

Jacob divided his fortune between his two sons, establishing a family custom which survives to this day. The Schmidheiny rule of inheritance requires that each son is given a domain over which he has absolute control, to avoid family squabbling. When Stephan — Jacob's great-grandson, a qualified lawyer now aged 44 — came into his inheritance, he rebuilt it into three private holding companies which together control Landis & Gyr (energy management), Leica (optical and scientific instruments), Asea Brown Boveri (power stations and electrical equipment) and SMH (watches, including Swatch). Schmidheiny is also on the board of Nestle and of Switzerland's largest hank, the Union Bank of Switzerland. He and his elder brother Thomas, who runs one of the world's largest cement companies and is on the boards of Swissair and Credit Suisse, have between them a net worth in excess of $3bn.

Journalists interviewing Stephan Schmidheiny are given in advance two approved Press profiles. One describes "an achiever with a penchant for fundamentalist social criticism and an inclination to self-doubt". As a young man, we are told, he considered becoming a missionary or a development worker. "I had a tough childhood. Not materially — we wanted far within^ But f was preoccupied with the big questions — existence, the meaning of life." His father wanted him to qualify as an engineer; Stephan wanted to study law. He hung around in Zurich, "plagued by self-doubt".

His degree thesis, on investment risk guarantees, dealt with a subject dear to the heart of his father, who had tried to get such a concept accepted by the Swiss government. It was a theme in tune with Switzerland's internationally expanding industries, which were looking for some form of state-backed guarantee for investments they were making in the third world. Within a year Stephan had not only been awarded his doctorate but also surmounted his identity crisis. By 1984, he had control of a sizeable part of an empire worth around Sfr2bn, with 23,000 employees.

Two events followed which are crucial to the official presentations of Stephan's life and character: a business slump and an environmental health ha2ard. In a profile in the September 1986 issue of Fortune magazine, he said: "For 30 years my father's company enjoyed uninterrupted growth. But six months after I became managing director in 1975, the construction market collapsed and we lost 30 per cent of our business. That kind of experience forms the pattern of your thinking."

[n 1976 he decided to lead one of his companies, Eternit, out of the asbestos business, due to rising evidence of health hazards. Eternit was one of the world's leading asbestos cement producers. Stephan, according to one profile, "had first-hand experience of the fibre — now recognised as highly carcinogenic - as the site foreman on one of the company's plants in Brazil." When Sweden put a ban on asbestos cement Stephan was sent there, and returned with the conviction that Eternit needed to get out of the stuff fast.

Stephan's father and the company's old guard serioulsy believed, according to the profile, that a few technical improvements to the extraction systems of the factories and a change in name from asbestos cement to fibre cement would do the trick. But Stephan Schmidheiny sensed deep down that mere cosmetics were not going to be enough. He defeated internal opposition to launch a search for a substitute. The company and its German affiliate aimed to put their cement production on an asbestos-free basis by 1990. In addition it shed its minority shareholding in Eternit Brazil and, consequently, the company's 50 per cent stake in the world's biggest asbestos mine.

Schmidheiny refers to the subsequent restructuring of his empire as "industrial architecture". His profiler tells us that he built his vision of the future "on the ruins of the Eternit empire", via investment in high-tech companies which would help preserve the natural environment."

SITTING in an office in a leafy Bloomsbury square, Stephan Schmidheiny describes himself as "a Swiss maverick idealist rich man". If that suggests an overt charisma, it is misleading: he is a crisp businessman with the self-effacing air of the truly rich.

In the summer of 1990, Maurice Strong [the organiser of the Rio Earth summit] approached Schmidheiny. "Maurice was looking for someone who would stimulate business interest in the whole Rio process," Schmidheiny says. Together they formed the Business Council for Sustainable Development, with Schmid-heiny's role being "to make sure that the business voice is heard in a process where many decisions need to be taken which can only be implemented on the condition that business understands the message and co-operates and actually makes things happen."

Two years later, after spending a third of his time and £4.5m of his own money enlisting 47 leading industrialists (including the heads of Volkswagen, Du Pont, Alcoa, Nippon Steel and Royal Dutch Shell), Schmidheiny was in Washington, telling George Bush: "The environment must no longer be an issue primarily addressed on the ethical and legal levels, but should become an integral consideration in the economic game which has maJe possible the triumph of freedom in the world."

Schmidheiny hopes the council will be seen as a symbol of "eco-efficiency", a beacon that will lead the corporate conscience into a new age. In his book, Changing Course, he states that the cornerstone of sustainable development is "a system of open, competitive markets both within and between countries" — in other words, the removal of barriers that restrict market access and activity. Environmental measures should be imposed through economic instruments (such as taxes) rather than controls or self-regulation. Subsidies should be phased out, and prices should "increasingly reflect the costs of environmental damage". BCSD supports the introduction of pollution taxes, and a closer relationship between aid programmes and business investments.

When it is suggested to him that his approach seems to concentrate on the economic approach to ecology, ignoring ethical considerations, Schmidheiny responds: "In the past, the environment problem in the world has been very much a question of moral ethics, and of humanitarian efforts and philanthropic motives. The consequence was that governments have reacted, by and large, in a repressive way - bans of all kinds, regulations, standards imposed on industry. We believe that has served a useful purpose, but that now the time has come where this must be integrated into the whole economy. If we don't, we lose."

Isn't the idea of unlimited growth outdated? "We believe there must be further development in the whole world. How could you possibly deny growth to those 5 billion people in the poorest segments of society, in the poorest countries? We need growth in all parts of the planet. We have these poor people, but we also need this in the industrial countries in order to move towards more efficiency. We do need growth. We need growth to overcome inefficient behaviour. It's an apparent paradox, but I think you'll find out that it's true."

Are we witnessing the birth of the real New World Order?

"1 accept that we have the burden of having caused a major part of the pollution in the past, and are still doing so. I think the industrialised countries have the increasing public awareness, political pressure, financial means and technical ability to change that behaviour. In developing countries, all these factors are missing - you don't have public awareness, because priorities are different, and you don't have the financial or technical means. The basis for my New World Order is to find a new and sound basis for co-operation in the world, rather than exploitation.

"I've been telling my friends in the developing countries, 'Why don't you look at this global environment challenge as a new basis for co-operation?' For the first time in history, rich countries should care for developing countries — not only on moral grounds and through philanthropic efforts ... but in our very mutual self-interest."

But doesn't the run-up to Rio suggest the differences between exploiters and the exploited are widening?

"So isn't business, in this respect, one small segment of humanity being exposed to the same problem? In the past, the whole of human civilisation and culture was based on how to dominate nature. That comes to an end — and I think that business is part of that process. We now learn that unless we overcome the traditional view that creating wealth means using up and throwing away natural resources, we will lose out."

TO FIND OUT WHAT STEPHAN SCHMIDHEINEY HAS BEEN UP TO SINCE RIO, SEE NEXT POSTING
at 3:05 pm