The Truth Is Out There Somewhere 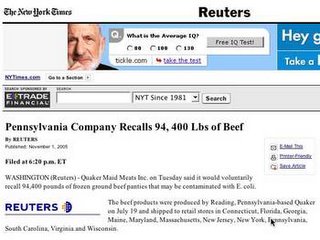 'You can't believe everything you read in the papers' is a well-known cliche - and if you want full and on-going evidence of same, we recommend the following two websites that specialise in documenting the errors so common in our daily press - let alone our national tv news. Both are beautifully organised and executed and deserve regular viewings:

Regret the Error is the work of Craig Silverman who deserves some kind of Pulitzer Prize for keeping a constant and beady eye on print pratfalls. Some are just hilarious (see 'beef panties' story above]; others have serious consequences.
In his review of 2005, Craig writes:

'Let’s just say it: This was a very bad year. That's the inevitable conclusion after just a few minutes spent reviewing this year’s long list of errors, corrections and plagiarists. But it’s about more than just quantity. What jumps out is that this was a year during which we witnessed the astounding consequences of media errors.

'It was the year that Newsweek’s Koran error played a role in deadly riots, the year a Fox News commentator’s error caused a family to be terrorized by its neighbors, the year the Chicago Tribune was sued for $1 million for mistakenly labeling a man a mobster (it did the same to another man the same week but he declined to sue). The year the New York Times' reputation took a beating over its failure to accurately report on WMDs in Iraq. And let’s not forget the furor over a “nudge” that never was.

'Media errors caused incredible consequences for average citizens and the media in 2005. These consequences, though dire for all involved, do have a silver lining. They are a powerful argument in favor of instituting a higher standard of accuracy in the media. Fact checking needs to play a greater role in the editing process, anti-plagiarism software should be utilized within newsrooms, and the correction must be evolved to meet a higher standard of disclosure.' 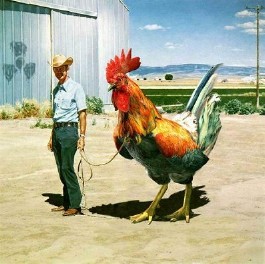 Equally marvelous is Museum of Hoaxes, the work of Alex Boese, whose encylopaedic site includes not only a monumental chronological history of hoaxes and April Fools through the ages but also a Hoax website gallery and Hoax photo gallery, the Top 10 College Pranks of All Time and the Tell-Tale Creature Gallery. Plus a forum.

See also the Wikipedia entry on Urban Legends with many links to worthwhile sites, the intro of which is digrested below:

Urban legends are not necessarily untrue, but they are often false, distorted, exaggerated, or sensationalized. Despite the name, urban legends do not necessarily take place in an urban setting. The name is designed to differentiate them from traditional folklore created in preindustrial times.

Some urban legends have survived a very long time, evolving only slightly over the years, as in the case of the story of a woman killed by spiders nesting in her elaborate hairdo. Others are new and reflect modern circumstances, like the story of people being anaesthetized and waking up minus a kidney surgically removed for trsnplant.

Urban legends often are born of fears and insecurities, or specifically designed to prey on such concerns.
at 9:09 pm