The First and Last Telegram 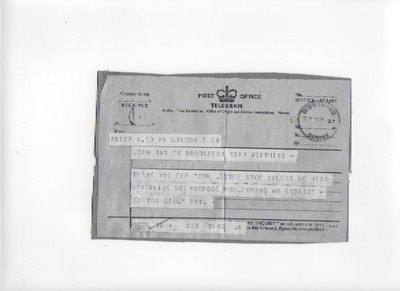 News that Western Union has sent its last telegram (see 'The Telegram Is Dead Stop in The Independent) prompted me to dig out the above telegram, sent to me by the Daily Mail when I was 17. It resulted in my first appearance in print in the national press.

It followed a typical Mail hatchet job on the marvellous and wonderful Magical Mystery Tour by the Beatles,
which had received a right slagging off by the balding tv critic of the time. I was outraged enough to pen them the following letter which was printed as follows:

'I believe the Beatles to be real artists, in the Renaissance sense of the word, a belief which was strengthened by seeing this film. We were presented with 50 fleeting moments of fantasy which were appealing not only to the young but to everyone who is young at heart. I suspect that the reason so many disliked it was that it was disturbing after the complacent entertainment of pantomime. The music was enchanting, the photography lyrical and the humour funny. I feel if people criticised themselves first, rather than an artistic work such as this, they might then begin to realise its true merit.' - JOHN MAY (17)
at 9:55 am