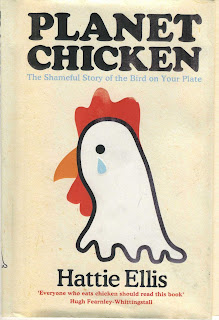 I founded The Beast magazine ('The Magazine That Bites Back') which was first published in June 1979. It ran for ten issues until Summer 1981. It was possibly the world's first newstand magazine on animal liberation and welfare.

At that time, these issues were very marginalised and considered quite extreme. There was scant knowledge about what was being done to animals, compared to today, and the number of animal groups and people seriously involved was small. 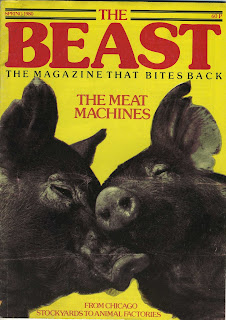 So when I read in Hattie Ellis' book about the size and scale of the activities of Compassion for World Farming it is more than encouraging. In the days of The Beast it was a tiny shoestring operation, struggling for the oxygen of publicity. And it is good to read in her excellent book of the Real Meat company and people who are genuinely and actively worked to change livestock practices and welfare within the UK and abroad. Heartening in fact. And to read about the undeniably growing level of concern and awareness amongst shoppers, the growth of farmer's markets and the 'slow food' movement. Brilliant.

But in order to reach these causes for optimism, one has to take a journey through the first half of the book, into some very dark sheds where we are forced to confront - nay experience, such is Ms Ellis' skill - the realities of what we are doing to the chickens, or rather what is being done to them in our names by others.

I had rather naively begun to think that some real progress had and was being made in animal welfare. After all, we had been through Foot and Mouth and BSE and with Bird Flu looming like a Beak of Damocles, you would think that hygiene and biosecurity alone would drive reform.
Such is not the case.

Ms Ellis tells us that we are in the centre of a Livestock Revolution equivalent to the Green Revolution in agriculture of the 1960s/70s. More of the world want to eat meat on a regular basis and chicken is the meat of choice. It is a lower status meat and thus cheaper and available to all. It accounts for the majority of the 50 billion food animals eaten worldwide each year.

In order to meet this insatiable appetite for chicken, we humans have built an industrial production line system of infinite cruelty, one virtually guaranteed to ensure that the short life of these young birds is as full of as much pain and distress as possible. I'll spare you the details but this book won't.

Some glacially slow progress towards better animal welfare has been made but the figures speak for themselves. The majority of chickens are still subject to barbaric conditions - more than 96% in the UK are raised in 'factory farms' - .with little expectation of that changing much over the medium future. Unless we do something about it that is. That is only buy the best organic or highest welfare chicken you can find. It will be more expensive so you will eat it less but appreciate it more. Or become a vegetarian.

Consumers can create change and there is an urgent need to make it happen. We need to vote with our wallets, to force supermarkets and giant chicken producers to move rapidly towards humane farming methods, and with our votes to pressure our legislators to change the laws - or enforce the existing welfare legislation we have more effectively.

'Planet Chicken' is an important book, engagingly written, shocking and sensuous by turns. The author, a distinguished food writer of boundless curiosity, with many fine books already to her credit, employs her trademark technique of getting away from the desk and out onto the land and into the market and kitchen, to meet people of all kinds and many cultures, seeing the reality for herself, asking the right questions and remaining by turns full of delight and disgust at what she discovers.

The book leads us through a dark underworld, points a light towards an optimistic future and gives us the information we need to do our bit. It is a work of bravery which will encourage and challenge many to take up the task of creating a more humane future for all farmed creatures.

I remember an issue of 'The Beast', had an amazing cover - MUTATE NOW & AVOID THE RUSH!
At the time I was involved in the Sabs & Animal Rights, & was given it by a friend who was pretty hard core.