LSD and THE BROTHERHOOD 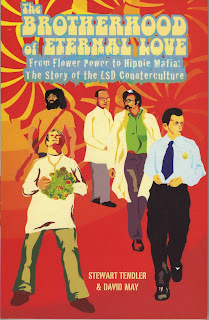 This is an updated reissue of the book which has become a cult classic since its first publication in 1984. Written by the former Sunday Times journalist David May and The Times' crime correspondent Stewart Tendler, it is a textbook example of solid investigative reporting into the history of LSD in general and the underground characters behind its manufacture and distribution during the '60s and '70s in particular.

Based on scores of original interviews with many of the key particpants - both lawbreakers and feds - it take us into a clandestine world where visionary chemists linked to the Grateful Dead and the utopian Brotherhood of Eternal Love conspire to produce enough LSD to power a cultural revolution.
The scale of their ambition and activities, inspired by the antics of Timothy Leary (one of the book's central characters), requires their engagement with Hell's Angels, career criminals, professional fantasists and other duplicitous and shadowy figures who often turn out to be undercover agents or intelligence operatives. The links extend to a major LSD production ring in the UK, who were famously brought to trial in the late 1970s by a massive police operation codenamed 'Operation Julie.'

A fresh epilogue in this new edition traces the fate of all the book's main characters up to the present day and provides a valuable historical perspective on a utopian time when it really did seem likely that this 'problem child' (the phrase used to describe LSD by its discoverer, Swiss chemist Albert Hoffman) could change the course of history. Certainly it changed the minds of thousands of key creative people during this period.

In a world of half-baked conspiracy theories and loosely researched internet tittle-tattle, in which myth and supposition take the place of documented fact, it is easy to see why this important intensively detailed work continues to maintain its credibility - it's a powerful tale well told, happily devoid of emotional judgments but stuffed with extraordinary tales and characters.

'The Brotherhood of Eternal Love' - by Stewart Tendler & David May [Cyan Books. London]

(Left) Cover of the original version, now a collector's edition, published by Panther Books in 1984 [The Generalist Archive]

'Revealed: Dentist who introduced Beatles to LSD' by Ian Herbert (The Independent 9.12.06)

'The trip goes on' - It was the drug that fuelled the psychedelic 60s - and was tested as a weapon by MI6. But whatever became of LSD? Duncan Campbell traces its colourful past, and finds that the acidhead are still out there
The Guardian 28.2.07

Nine drawings done by an artist under the influence of LSD


‘MI6 pays out over secret LSD mind control tests’ - Rob Evans (The Guardian 24.2.06). ‘The Secret Intelligence Service, MI6, has paid thousands of pounds in compensation to servicemen who were fed LSD without their consent in clandestine mind-control experiments in the 1950s. MI6 has agreed an out-of-court settlement with the men, who said they were duped into taking part in the experiments and had waited years to learn the truth.’

Slideshow: LSD: The Geek's Wonder Drug ? (Wired 16.1.06) Participants from around the globe came to , to celebrate Albert Hofmann's 100th birthday and ponder the future of acid.

‘A dose of madness’ - Johan Jensen (The Guardian 8.8.02) Forty years ago, two psychiatrists administered history's largest dose of LSD.‘Mystified by the new wonder drug LSD, the psychiatrist Louis Jolyon West and his colleague at the , Chester M Pierce, were looking for a new way to investigate the drug in 1962. They came up with an idea so outlandish it could only happen in the world of experimental psychology. Male elephants are prone to bouts of madness; LSD seems to cause a temporary form of madness; perhaps if we combine the two, they reasoned, we could make an elephant go mad. Their research paper about this venture is a tragicomedy of high hopes and lessons not learnt. For only mindless optimism and blind faith can account for the events that unfolded on a hot summer day in Oklahoma City's Lincoln Park Zoo 40 years ago.’

'Psychiatrist calls for end to 30-year taboo over use of LSD as a medical treatment - Sarah Bosley (The Guardian 11.1.06)

I'll have to get me a copy of LSD and The Brotherhood. Thanks for blogging it.