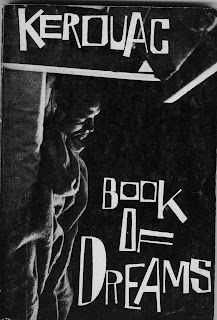 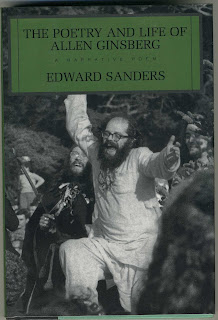 Following on from my post about the discovery a rare signed copy of a book by beat poet Jack Micheline in a Lewes second-hand bookshop ( see
Jack Micheline: Beat Writer), the Beat Library was further enhanced by the gift of two great books, purchased in a second-hand bookshop in Castlemaine, in Victoria's Gold Rush region by friend and poet Lin Heyworth. [For new poem by her, see end of this post]

The Ginsberg book by ex-Fug Ed Sanders (published by the Overlook Press in Woodstock) in 2000) is a book-length poetic narrative (in Ginsberg's style), recounting the poet's life and times. Sanders writes: 'The life of Allen Ginsberg was very complicated, so 'The Poetry & Life of Allen Ginsberg' is really a kind of pathway through the Forest Ginsberg.'

It really is a wonderful book, and ideal prelude to reading the two major biographies - 'Ginsberg' by Barry Miles and 'Dharma Lion' by Michael Schumacher - and engaging with the poetry itself. A truly remarkable man. Sanders has also produced '1968: A History in Verse' and one volume of 'America: A History in Verse' which I shall report back on.

See Previous Post: My article on Ginsberg - A Prophet on the Electric Networks - based on the interview I did with him in Miles' flat in London on April 25th 1985.

The copy of Book of Dreams is a 1973 seventh printing of the City Lights edition first published in 1961. It features a wonderfully atmospheric cover photo by the legendary photographer and filmmaker Robert Frank.

[Kerouac wrote an introductory essay for Frank's wonderful book of black and white photography 'The Americans.' This was originally published in 1959 by Robert Delpire in Paris and Grove Press in New York. There was a 1968 Museum of Modern Art edition published by Aperture Press, which is in the Beat Library alongside the more recent reprint from Cornerhouse Publications in Manchester (1993)]

It was while Jack was working in North Carolina at the Rocky Mount Textile Mill that he began the dream notebooks that form this book. They were typed up when he was living with his mother (Memere) in Richmond Hill. Jack saw his dreams as another extension of spontaneous writing, almost automatic writing.

He wrote: 'The style of a person half awake from sleep and ripping it out in pencil by the bed, yes pencil, what a job! bleary eyes, insaned mind bemused and mystified by sleep, details that pop out even as you write them you don't know what they mean, till you wake up, have coffee, look at it, and see the logic of dreams in dream language itself, see?' (JK to Al Aronowitz in the New York Post (10.3.59)

Barry Miles devotes a couple of pages (pp 236-237) of his excellent Kerouac bio ('Jack Kerouac: King of The Beats' [Virgin Books. 2002]) to discussing 'Book of Dreams' and warning against snap judgments, quoting Freud as to the dangers of analysing dreams without knowing the context in which the dreams occured. The book contains many of the characters from his novels in bizarre situations, such characters all being based on people he knows with nom de plumes. Thus the real-life Neal Cassady appears in 'On the Road' as Dean Moriarty and in this book as Cody Pomeray.

In Kerouac's own foreword he writes '...the fact that everybody in the world dreams every night ties all mankind together shall we say in one unspoken Union and also proves that the world is really transcendental...'
*
The Moolort Plains: Victoria Australia 2007

And the sky opens up
Domes out egg blue
Into the delicate horizon
Possessed by an egg.

And the heat beats in on the plains

The blank empty enormity of it all
reeled beneath

Previous Posting: A Journalist's Death of Socrates by Lin Heyworth
at 2:41 pm