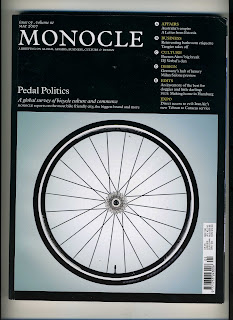 This is a rare bird, purchased at Lewes station newsagents: a genuinely original and almost eccentric magazine/journal both in format, style, design and intention. The brainchild of the splendidly named Tyler Brûlé (surely the invention of a master chef or Tom Wolfe), there is obviously a lot of money behind it: HQ in central London, bureaux in Tokyo, New York and Zurich. There is an impressive and tres sophistique website, sponsored by Rolex. Here can be found the concepts and history underpinning Monocle. 'We believe its time, ' they say, 'for a new, global, European-based media brand.'

: Affairs A global mix of reportage, essays and interviews with the forces shaping geopolitics; Business Devoted to identifying opportunities and inspiring the reader; Culture With a tight group of opinionated columnists, reviewers and interviewers, it devlivers the best in film, television, music media and art; Design Bypassing hype, design is dedicated to unearthing emerging and establishing talent; Edits Bite-sized and thought provoking, Edits are vital life improvements curated in a fast-paced well-researched collection. I love the language -breezy with a twist, written by men in aeroplanes, alternately gazing into the cool blue screen of their HD laptops and looking down on the European landscape below, eager to spot new opportunities, new excitements. Constantly arriving at foreign cities for swift meets with men who are designing the future. The quirks of the magazine (Issue 3) are as follows: 1) the cover story 'Pedal Politics: A global Survey of bicycle culture and commerce' is composed of a number of pieces scattered throughout the magazine which you have to search for. The page signage doesn't take you from one to the other, and there are a bewildering number of cute little icons and logos to confuse things further. 2) Most of the 178 main pages of the mag are printed on a feely matt paper, except for pp163-178 which are on a glossier paper. This whole section is an account of a flight made from Tehran to Caracas, an eccentric route initiated as a gesture of contact between the leaders of the two countries concerned, who got on well together it says. This story sets you up well but never really catches fire. The photos are bland. 3) Separately bound into the magazine is a 24pp manga comic - 'Kita Koga' (Story and art by Takanori Yasaka) which one reads, in Japanese; the back cover is the front, the story reads from top right to bottom left. Great idea but the contents is a bit weak.

I scanned every page of Monocle and read a high percentage of it. I also made notes of things that I learnt: 1) Gronigen is the World Cycling City - it has 150,000 residents and 300,000 bikes. 2) There were 500m cyclists in China until a decade ago but bike ownership has fallen 25% in the last five years; car ownership increased 20% last year alone to 22m 3) The highest car ownership in the world is in Liechtenstein (718 per 1,000 head of population) whilst Nigeria, oen of the world's largest oil-producingt nations has only 2 per 1,000. New Zealanders only take 2% of their journeys by bus and 1% by rail. Car ownership there is 655 per 1,000. 4) Less than 4% of the world's air traffic is in Africa but one-third of the world's air disasters happen there. 5) There is a sushi boom in Moscow 6) At the biggest ice cream trade fair in the world, they were selling cuttlefish ice cream and gorgonzola ice cream with prune sauce. 7) TOTO build the world's most intelligent toilet - The Washlet - which will, amongst other things, wash your bottom and even blowdry it to the sound of music. 8) The world's largest bicycle firm is Giant in Taiwan, run by 73-year old Mr Lin, whose dream it is to make Taiwan a cycling island 9) The best bikes in the world are made in the Nordic countries and Japan. 10) There is a good-looking music shop in New York called Other Music and a great mag shop in Lisbon called Tema.

Monocle feels good, is easy to read, entertaining and fresh. Worth £5.00. Issue 4 is out in a few days.

[Footnote: I bought a great magazine in Lisbon once, a special issue of 'American Photographer' on Cartier-Bresson, which helped keep me together during a flight through a thunderstorm on our way to Orly.]
at 11:41 am