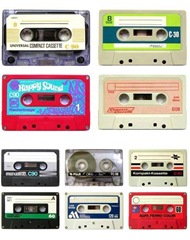 “I only listen to cassettes” – Thurston Moore/Sonic Youth

Its been more than four years since my Previous Post ‘The Death of the Cassette’, reported the decision of a major UK retailer to stop selling them, a move that triggered an emotional outcry. Now, thanks to Emil, The Generalist can report on the fact the fact that there is a thriving underground world of cassette releases, out of sight of the main stream media.

This Is Not A Mixtape by Marc Hogan on the Pitchfork website. This extensive article does a grand job of analysing the scene and listing some of the major bands and labels releasing them

Paradoxically, it may have taken the technology of the 00s for the technology of the 80s to really make a comeback. Today's cassette culture is both a reaction to and a product of digital media, the Internet, and downloading, says Shawn Reed, who runs Iowa City-based cassette label Night People. On one hand, tapes are "the embrace of something old and outdated, intentionally obscure and marginal, almost pointless in some way," he acknowledges. On the other hand, the Internet is a place where cassettes are "allowed to flourish." 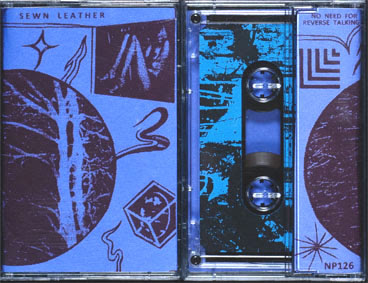 NP126 Sewn Leather- “No Need for Reverse Talking” C26 on the Night-People label.

101 Cassette Labels by Ceci Moss on the Rhizome website is a wonderful place to view the outpouring of creative work on cassettes.

‘In the age of GarageBand, Myspace, and file sharing, it may come as a surprise to some that cassette labels are still very much in operation. Tapes now function as a basic form of patronage between musicians and their audience; since a physical format is no longer necessary to send or receive music, these objects become a gesture of support. Tapes act to make tangible the connection between a creator and their listeners, and the attentive and often handmade packaging speaks to this exchange.’

Love Is A Mix Tape: Life and Loss, One Song At A Time by Rob Sheffield [Crown Publishing Group, 2007] 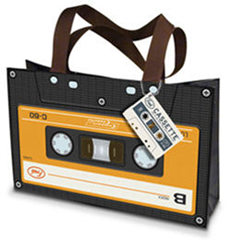 Reconsidering The Revival of Cassette Tape Revival by Calum Marsh on the Pop Matters website. Marsh is not in favour of this trend. The extensive comments under his piece examine many arguments for and against his position.

‘At best, the cassette revival is merely a vacuous fad of no genuine value; but at worst, it’s a confused, regressive cultural misstep more dangerous than most would care to admit. There is danger here, and despite the intentions of its advocates, this is a trend that’s less a tribute to the DIY mentality than a betrayal of its basic premise.’ 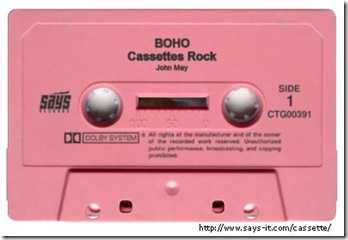 Make your own virtual cassette with Cassette Generator

Two other links which you  might also find interesting:

Excellent essay about the democratization of music production:
http://www.littlewhiteearbuds.com/feature/everything-popular-is-wrong-making-it-in-electronic-music-despite-democratization/


An audio lecture by Bill Drummond of the KLF on the end of recorded music:
http://freshonthenet.co.uk/drummond.mp3

Locally Edgeworld in Kensington Gardens has a host of cassettes and Ash, one of the staff was saying that casual buyers of "interesting stuff" are more likely to be buying cassettes than anything else.
Mind you a lot of the Brighton Cassette labels are producing more cd-rs than cassettes these days.

Nice one John, take a look at The Wire Magazine 'Sleeves Received' for some beautiful examples of the place where art meets DIY music production.
http://thewiremagazine.tumblr.com/