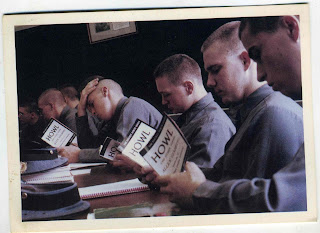 'Cadets at the Virginia Military Institute read Howl and Other Poems by Allen Ginsberg'. Photo by  Gordon Ball (1996). 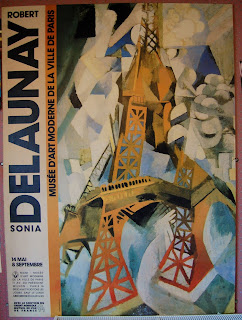 This image (above) I've had bluetacked to my wall for more than a decade I would reckon, one of a number of cards and images that fringe a large and wonderful mounted poster for a 1985 centennial exhibition of the work of Robert and Sonia Delaunay at the Musée Art Moderne de la Ville de Paris. It features 'Red Eiffel Tower' (1911-12) which is now in the Guggenheim in New York. Delaunay first painted the tower in celebration of his engagement to fellow artist Sonia Terk in 1909 and made it the subject of at least thirty works over the next few years and again in the 1920s.

Back to the postcard. It was given to me by a friend who had bought it in the City Lights Bookshop in San Francisco. I guess I've looked at it every day at some point.  Anywaysup as chance would have it, I've found out the story behind the photo thanks to the London Review of Books  for whom Iain Sinclair reviewed two new books under the heading 'Retro-Selfies': I Greet You at the Beginning of a Great Career: The Selected Correspondence of Lawrence Ferlinghetti and Allen Ginsberg, 1955–97 edited by Bill Morgan (City Lights) and Writing across the Landscape: Travel Journals 1960-2010 by Lawrence Ferlinghetti, edited by Giada Diano and Matthew Gleeson (Liveright)
As a huge fan of The Beats I was more than a little interested Sinclair writes like a dream and I picked up more info on Ferlinghetti than ever before. The piece really clarifies his  relationship to Ginsberg (who, like most of The Beats was quite critical and patronising about Ferlinghetti's own work). This is where we come to the postcard.

'Thirty-six years later [after first publication of Howl], City Lights Bookstore was selling a postcard by the photographer Gordon Ball showing a line of shaven-headed cadets at the Virginia Military Institute frowning over their copies of Howl, as if challenged to formulate tactics for understanding, and eradicating, the enemy within. The notion that god’s country could contain aliens ‘who cowered in unshaven rooms in underwear, burning their money in wastebaskets and listening to the Terror through the wall’ was altogether too much to bear. This slender, black-on-white, slip-in-the-pocket City Lights reprint, gripped in the paws of the future military élite, looks like the all-American equivalent of The Little Red Book for the uniformed warriors of free-market capitalism. Are they being inoculated against the viruses of chemical addiction, homosexuality, madness and elective poverty? ‘Robot apartments! Invisible suburbs! … Granite cocks! Monstrous bombs!’ Or are these monkish warriors honouring the native tradition of converting outlaws, rustlers and genocidal maniacs into neutralised and exploitable brands? First you beat them, incarcerate them, execute them, then you produce the box set, sell the jeans and collect all the surviving scraps of paper for a million-dollar pitch to the Harry Ransom Center at the University of Texas at Austin, or some other well-endowed coldstore vault.'

Interestingly enough Alan Baragoma, the guy who had arranged for Ginsberg to visit the Academy, responded with a letter in the next issue:

'Iain Sinclair is within his rights to scorn the co-opting of Beat Generation rebelliousness as a way to defang it, but he is mistaken in using Allen Ginsberg’s visit to the Virginia Military Institute in 1991 and my friend Gordon Ball’s well-known photograph of cadets reading Howl to make his point.'

Baragoma says that Ginsberg stayed for a whole week, recited Howl publicly for the first time in ten years and conducted a workshop in transcendental meditation. He writes:

' It’s true that some cadets, administrators, alumni and faculty were unhappy about it, though not because of Ginsberg’s homosexuality or drug use so much as for his pacifism during the first Gulf War. But there were also many people in all those categories who were excited by the visit, and the administration supported us, even requiring the entire corps to attend the poetry reading. Ginsberg was aware of this and at the intermission told the cadets that as far as he was concerned they had fulfilled their obligation and were free to leave. Roughly two-thirds of the corps stayed for the second half. Afterwards, cadets crowded around Ginsberg to speak with him and later lined up at the bookstore to get their copies of Howl autographed...

'What you see in Gordon’s photo is not frowning, but concentration, weariness, and some confusion as Ginsberg walked students through this challenging poem. This is a class of freshmen, few if any are English majors. How do you expect them to look?' 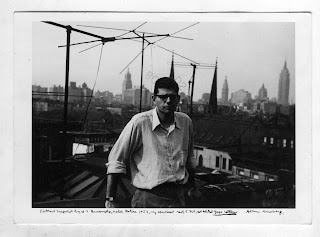 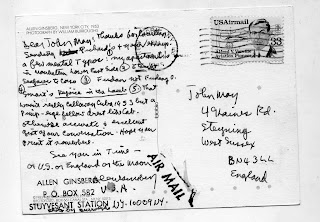 One of my most treasured possessions: a postcard from Allen Ginsberg, who I interviewed on April 25th 1985 - four days before my 45th birthday. You can read the text of the piece I wrote in a Previous Post: Meeting Allen Ginsberg 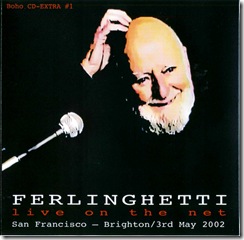 This is the recording of a live internet link-up we did with Lawrence Ferlinghetti - from the City Lights bookstore to the Komedia in Brighton - on the night of 3rd May 2002. It was quite a technological achievement at that time and, I believe, the first ever Internet link-up with a Beat poet.

For all Previous Beat Posts: See Beat News
at 12:55 pm