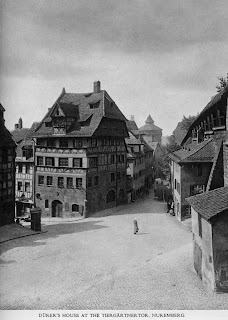 The last section of WJ's programme' is devoted to Albrecht Dürer one of my all-time favourite artists, whose work I've been fascinated with since teenage years.Here's a beautiful antique photo of Dürer's Nuremburg house which, as you see from the image of WJ below, is still intact and serves as a museum of his life and work.

WJ concentrates rather disdainfully on portraying Dürer as a massive egoist, He did a whole string of self-portraits - the first when he was just 13 (below) - and included himself somewhere in many of his most famous paintings  in the picture. 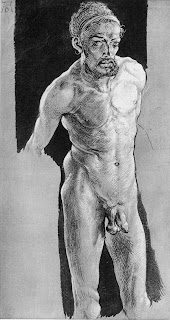 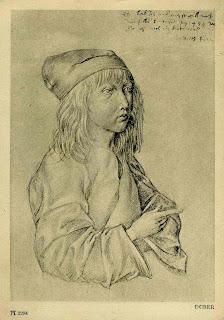 One important self-portrait which WJ does not mention is his nude study of himself (left) - the first nude self-portrait in western art I believe.


Dürer embraced the new printing technologies and become the most famous and successful print maker in Europe at that time.
He was interested in science and mathematics and no doubt used lenses in some of his work 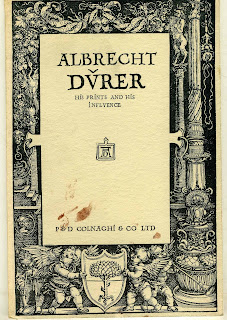 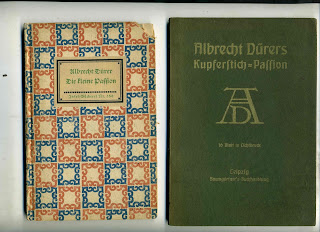 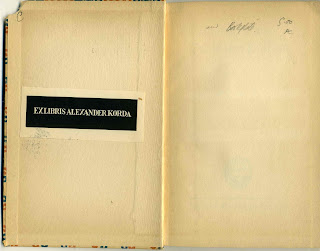 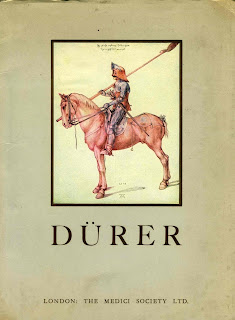 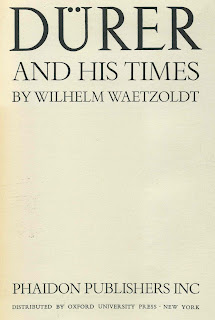 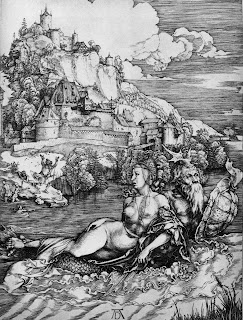 These are all second-hand books I've picked up over the years. The one at top left - 'Albrecht Dürer: His Prints and his Influence' is a catalogue for an exhibition of Dürer's prints at P& D Colnaghi in Bond Street, London (20th May - 18th June 1971). One of them 'The Sea Monster' (above), produced c. 1501, was selling at that time for £1500. The two German books at top right are small collections of prints relating to the Life of Christ. They are both published in Leipzig. Underneath you see the inside of one which contains a book plate: Ex Libris Alexander Korda. Could this be the Alexander Korda, the Hungarian-born film producer and director, who became a leading figure in the British film industry ? next comes a study of Dürer by John Gurney, first published by  The Medici Society in London in 1949, republished 1969. It contains some excellent colour paintings and prints on card ready for framing. On the cover is a watercolour study for his famous print 'The Knight, Death and the Devil' (dated 1498). Finally an excellent hardback copy of Waetzoldt's study of Dürer, translated from the German and published in 1950. As a special treat, the book's previous owner stuffed it throughout with beautiful Durer postcards like this: 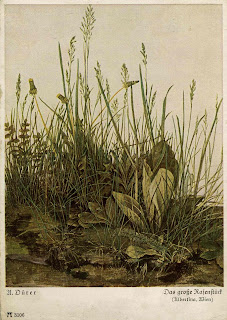 WJ loves the watercolours as I do - the hare, the bird's wing, the grass and flowers, all exquisitely and delicately rendered. At some other point, I'll tell the interesting story of Dürer's famous Rhinoceros print. 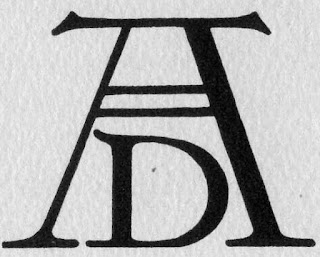