THE ORIGIN OF DOGS PRIMITIVE DOG BREEDS: Africanis is a landrace of South African dogs. It is believed to be of ancient origin, directly descended from hounds and pariah dogs of ancient Africa, introduced into the Nile Valley from the Levant. The Swahili name for the breed is umbwa wa ki-shenzi meaning common or mongrel or “traditional dog”. Africanis is also an umbrella name for all the aboriginal dogs in southern Africa.

For some reason I've been curious about the origin dogs (and cats for that matter) and how they became domesticated. I'm not really a dog or cat person but the subject intrigued me. Now in an article called 'The search to find out where dogs came from' by James Gorman in a recent New York Times, it looks like fascinating clues if not definitive answers are emerging.

This is thanks to a worldwide cooperative scientific effort to create a huge database of ancient dog DNA to try and decode when and where they first emerged. At present there are a wide variety of hypotheses.

There is general agreement that dogs were domesticated 15,000 years ago but some biologists believe that this happened 30,000 years ago. Researchers looking at both dog and wolf DNA, modern and past, have variously come up with evidence that dogs originated in either Africa, Europe, Siberia, Mongolia and East Asia.

In earlier theories it was believed that dogs evolved from ancient wolves.Human hunter-gatherers nabbed wolf cubs and bred the tamer ones to become dogs. However wolves and wolf puppies are hard to tame and the new thinking is that dogs invented themselves. Some wolves hung round hunters and scavenged their kills more than others. They gradually became tamer and had lots of puppies because it was easier to get food that way than hunting elk. So, according to 'Dogs' by professor Raymond Coppinger "the domestic house dog may have evolved into a parasite."

Pet dogs make up only a quarter of the world population of dogs,estimated at one billion. The rest run wild, scavenging where they can and causing tens of thousands of human deaths annually through rabies.

Wolves are different from from dogs but they do interbreed easily and, writes Gorman, 'some scientists are not convinced that the two are even different species, a skepticism that reflects debates in science about how to define species.' In other words, is the concept of species a fact of nature or an arbitrary line drawn by humans.

Genetics could provide the best clues to solving these issues except that dog genetics are in a mess. Professor Greger Larsen a biologist in the archaeology department of Oxford University explains to Gorman 'that most dog breeds were invented in the 19th century during a period of dog obsession that he called "the giant whirlwind blender of the European crazy Victorian dog-breeding frenzy." Brilliant.

Dr Lasen and his team have traveled the world, collecting some 1500 DNA samples and photographs and measurements of several thousand remains, including some complete skulls, from dogs, wolves and canids (somewhere in-between), both old and modern.

Hominid DNA was the key which has enabled us to map the evolution and migrations of humans and Larsen hopes they can do the same for canines. He believes the domestication of dogs may have been a watershed in human history. "Maybe [it] on some level kicks off this whole change  in the way that humans are involved and responding to and interacting with their environment. I don't think that's outlandish."

The Chinese have yet to supply samples from their part of the world for this project but there is another collaborative 'big data' project brewing aimed at sequencing 10,000 dog genomes.

Central Asia is the newest and best candidate, according to a large study of dogs from around the world. Laura M. Shannon and Adam R. Boyko at Cornell University, and an international group of other scientists, studied not only purebred dogs, but also street or village dogs. 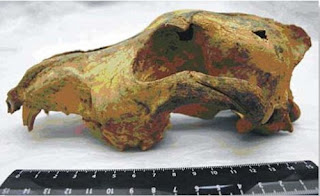 Various views of the skull of a 33,000-Year-Old Incipient Dog from the Altai Mountains of Siberia 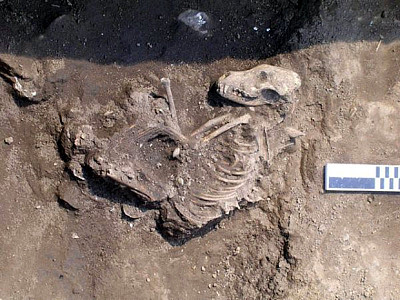 Excellent and lengthy discussion about these two finds and many other aspects of the origins of dogs on the blog Retrieverman.net Some Carolina dogs still live in the wild, and local people have long thought they were one of the few breeds that predated the European arrival in the Americas: “Our native dog,” as Michael Ruano, another enthusiast who often works with Mr. Anderson, put it. “America’s natural dog.” Now, a new study of canine DNA backs up the folklore. A team led by Peter Savolainen at the Royal Institute of Technology in Sweden has reported that several dog breeds in the Americas — among them the Peruvian hairless, the Chihuahua and the Carolina dog — are without some genetic markers indicative of European origin, suggesting they arrived in an earlier migration from Asia.