For people of my generation Rolling Stone, first published on September 9th 1967,  was for many years the boss magazine. 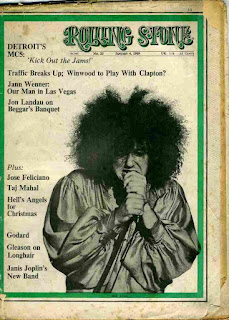 Initially copies were difficult to get hold of in the UK outside of London. The first copy I managed to get my hands on was Issue 24 with the MC5 cover.


For a brief period, a British edition of Rolling Stone appeared, combining US content with commissioned British material and advertising. 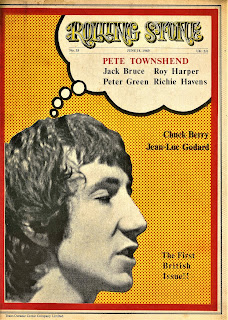 When the San Francisco office demanded that all copy be vetted by them before publication, the staff left and Alan Marcuson (one of their number) set up Friends in 1969, a national underground paper that initially aped the RS style and format, combining music, politics and culture, before gradually growing its own identity, look and feel. After some 36 issues, Friends mutated into Frendz, which finally died in 1972 when I was one of the editorial team on the last set of issues.

In those days before the internet and computing, RS was a hotlink to the tumultuous happenings on the US scene. No-one caught it better. The quality of  the journalism, photography and design was superior, the whole enterprise driven by a force of nature known as Jann Wenner advised by his mentor Ralph J. Gleason, a dandyesque high-minded music writer of considerable experience, with great taste and a fabulous address book.

This 500pp+ doorstop of a book by Joe Hagan is built on a raft of celeb interviews, RS insiders. Wenner himself  and access to Jann's own massive archive. Hagan is a top-rung profile writer and investigative reporter with a long track record for toney publications like New York, the Wall Street Journal and many others - see his website joehagan.net.

It tracks the intertwined story of Wenner's insatiable appetite for fame, power. money, sex and drugs alongside his massive ambition to create a major magazine that documented the new music scene in an unprecedented fashion, that mirrored the mad velocity of the youth culture of the time and the protest and revolutionary movements against the Vietnam War and racism.

Wenner adored John Lennon and considered him his lodestar. When Lennon granted him an extensive interview providing it was only published in the magazine, he was enraged when Wenner ignored their agreement and put it out in book form as well. They didn't speak for many years but Wenner later had close connections with Yoko Ono and the Annie Leibowitz picture on the cover of Rolling Stone shortly after his assassination remains the most famous of the lot.

The book is interesting about Wenner's relationship with Mick Jagger and The Stones. Mick was not happy about the title but over the years he used Wenner's adoration of him to leverage more RS covers than any other band. During the cocaine years, the two formed part of a cabal of high rollers
who enjoyed luxury lifestyles and sexual adventures in many exotic locations.

Hagan's book also underlines the importance of Hunter S. Thompson who, by general agreement, was the hottest writer/journalist of the day, pushing barriers, opening up a gonzo universe of extreme behaviour and stunning power. Another key figure is Annie Liebowitz, whose images would come to define the era. 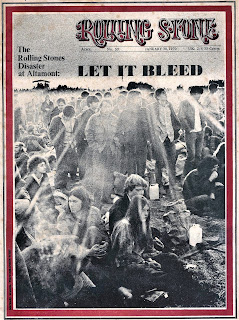 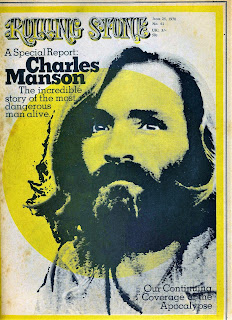 Altamont and Charlie Manson, both documented at length, marked a decisive shift in the culture. It has long been considered that when Rolling Stone moved from the West Coast to New York in 1977, the magazine lost its soul. The coverage shifted to Hollywood stars as the music changed from rock to disco and Studio 52 became the place to be. The more successful Wenner became, the more the music coverage fades into the background and the book puts more emphasis on his private life and his corporate manoeuvres which is less interesting. 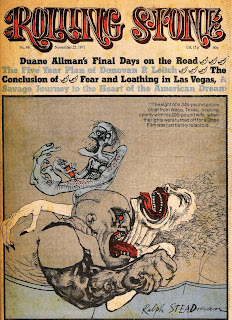 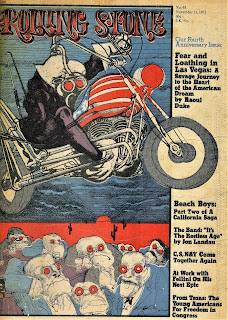 It's worth noting as Hagan does, that very few black bands or faces made the front covers for many years. The book reveals a great deal that has never come out before. Coke is everywhere. Hagan conducted 240 interviews which included stellar access to Jagger, Dylan, Springsteen, McCartney, Geffen and Ono. There's a meticuliousness to the book which speaks to Hagan's professionalism (and also, no doubt, the amount of time spent with the lawyers). If you want to get a glimpse behind the scenes of the music business, Hagen's account of the Rock and Roll Hall of Fame which Wenner co-founded is more than a little sickening as is the story of a softball game between the Eagles and RS staffers - a heavy needle match. Wading through this hefty detailed tome is a worthwhile week-long commitment. Hagen's book is valuable and will be a prime source for years to come. I doubt that other writers will ever want to spend four years on this topic given the subject's reaction to its publication.

Wenner hates this book and has disassociated himself from it. Two previous biographers of Wenner also had their projects cancelled. The fuller story of what went wrong is documented in this New York Times story: Jann Wenner and His Biographer Have a Falling Out by Joe Coscarelli and Sydney Ember [October 18, 2017]. Listen to audio discussion on the book by these writers.

In a great recent  interview conducted by David Marchese for Vulture.com it's clear that Hagan went into the project knowing that many people, including close friends, had been been burned by Wenner. He told Marchese  'His big thing was wanting to have control over the reporting about sex — who he slept with and whose names would come out.' Wenner was bisexual but didn't come out until 1994. He eventually amicably divorced his wife Jane - a major shareholder in his empire -  and is now married to his gay partner.

Marchese asks: For younger people who didn’t grow up reading Rolling Stone, why should Jann Wenner be relevant?


Because in a way, Jann Wenner represented the spirit of his age. All generations who are coming out into power are all alike, and given the slightest slack in the velvet rope they’ll take everything. That’s what baby boomers are about. I mean, Jann always calls himself the “First Child of Baby Boom.” And he was like the id of the baby boom. He was the raw thing of their ambition, and his life is a way of understanding how we’ve got to where we are as a culture today. At first when Trump was elected I was really blown away and wondering what it all meant, and then at some point it all made sense: Of course he was where we’ve been headed. Trump is the same age as Jann, there are parallels between the two in terms of their desire for fame and pursuit of power and our celebrity culture. It’s all become uncoupled from the idealism of the ’60s. It’s about fame and power, pure and simple, and Jann is a part of that transformation. I mean, if you look at the arc of the book, it starts with Jann and John Lennon and ends with Donald Trump on the cover of Rolling Stone. That’s the path of the culture.

Too late to be included in the book was the New York Times story  that Jann Wenner (now 71) was seeking to sell his controlling share in Rolling Stone, which his 27-year old son Gus now looks after as president of Wenner Media. In 2016, the Wenners sold a 49 percent stake in Rolling Stone to BandLab Technologies, a Singapore-based music and tech company, a  $40 million deal allowing them to exploit the brand worldwide, especially in China.

Rolling Stone's website is, says Hagan, 'well trafficked' but the print version, like many other titles in our digital world, is a pale shadow of its former self. Its reputation for first-class journalism was also recently damaged by the fact that they had to retract a story about a University of Virginia gang rape, a narrative that couldn’t be proved. That story resulted in three libel suits, one of which saw a federal jury award the plaintiff $3 million in damages in October 2016

Hagan tells Marchese: '..one of the points that I hope comes across in the book is how deeply Rolling Stone is an expression of Jann Wenner the man — his personality and his ego and his worldview. It’s almost like the magazine is a part of his body. He was having these physical ailments over the summer, and I had a conversation with friends of his and the thinking was that as the magazine was deteriorating, so was he.' 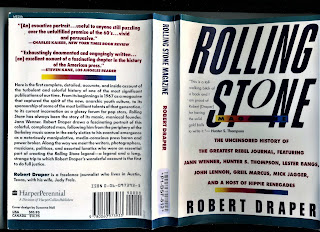 This 1990 book “Rolling Stone Magazine: The Uncensored History” by Robert Draper which Hagen quotes from was not allowed into the Rolling Stone office. Unable to read a second history at present but from a scan of the book, there is much more about the journalists. Will report back. 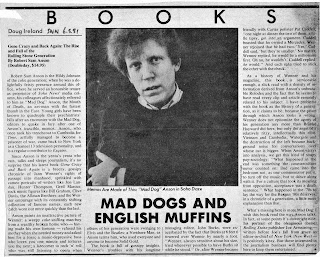 Discovered this review of an earlier book: 'Gone Crazy and Back Again: The Rise and Fall of the Rolling Stone Generation by Robert Sam Anson [Doubleday 1981].

'Anson paints an unattractive picture of Wenner, a weepy, coke-sniffing, man-boy from a wealthy broken home...a manic depressive boss who loves you one minute and tortures you the next.'

⧫ 'Rolling Stone Cover to Cover: The First 40 Years' [Published Nov 2007], a full-colour paperback which comes in a box with a set of discs containing every page of the issues.
at 1:16 pm