Having digested Paul Gorman's history book, THE GENERALIST decided to try and track down all the contributions I made to the mag over what period.

My name was on the masthead [from Issue 10/ Feb1981] for several years as one of the many freelance contributors. I was very much an outrider, contributing shorter pieces to the Intro and review sections. Whatever reputation I had at this time came mainly from my work at the NME as 'Dick Tracy' where I'd staked out some territory. I got on well with Nick Logan but I was never one of his star writers. It was great to hang out at the various Face offices [Mortimer Street and The Old Laundry] and to pitch in stories to Paul Rambali and Lesley White.

I wrote three features that made it into print: 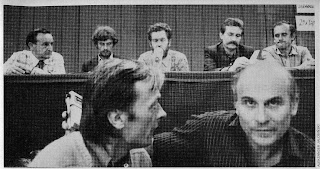 ⧫ An exclusive feature on the great Polish foreign correspondent Ryszard Kapuscinski based on original interviews. Full text on this blog.


⧫ A significant feature on the fashion designer Katherine Hamnett which helped establish her radical credentials, reprinted for the first time in FACE3 post to follow.

I was also selected by Nick to travel to Paris and represent The Face at the Actuel office for the European issue, organised by the late Jean-François Bizot (1944 – 2007). See FACE 4 post 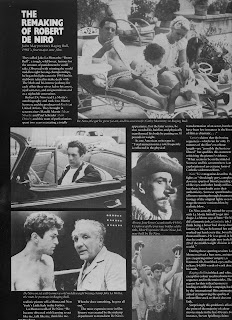 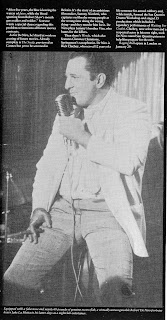 " . . the world was divided into those who had it and those who did not. This quality, this IT, was never named, however, nor was it talked about in any way."
THE Right Stuff is the mythic essence of America and who better to write about it than New Journalist Tom Wolfe, who has spent an entire career observing the social mores, the trends, the styles of USA as viewed from the perspective of bizarre social, private groups like bikers, surfers and acid heads.Wolfe may be the only living writer who can handle fashion and technology with equal ease. He observes the cut of an astronaut's cuff while delineating the technological statistics of a Saturn launcher. He revels in the incongruity of it all, the specialised language: the words, baby, the words.

In essence, this shimmery paperback is a history of the American drive into space, from the postwar world of the test pilots to the end of the Mercury programme, ending before the Man on the Moon became reality. For those who lived through this Space Race, here is a completely new view of events, a startling revisioning of information previously only made public through the sanitary sieve of LIFE magazine, which airbrushed out all warts and blemishes.

This is the only book that will actually give you the experience of an orbital flight round this planet, in a superb chapter that can only have been constructed from endless hours of conversation. Or was it?

Wolfe's technique is flawless, his prose propelling you along like high-octane fuel—and there are no joins. Here is a class performer at work, a showman with a serious bent. He lays bare what it meant to be an astronaut. The Flying & Drinking and Drinking & Driving cycle. What it feels like to inhale pure oxygen to cut through a hangover, and then charge out into the stratosphere to break the sound barrier in prototype needleplanes that bend and strain. What it feels like to be strapped in a centrifuge, spun at unbelievable speeds, with clusters of wires up your rectum. What it feels like to be sitting in an armchair which fits like a glove, sitting on top of an ocean of explosive fuel and pointing at the stars.

Reading Tom Wolfe in full flight is an EXPERIENCE. He lights an afterburner under your imagination—and the korker is it's all true. Don't miss this. 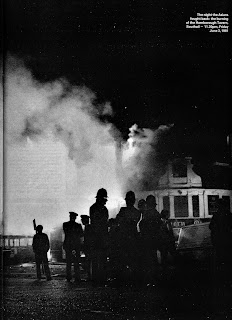 Sadat is shot. The Pope is shot. Reagan is shot. The Yorkshire Ripper is caught and caged. Operation Bright Star sees American paratroopers playing war games in Egypt. Russians stage massive invasion rehearsals on the shores of the Baltic. Thousands die and are dying in the deadly and frightening Spanish cooking oil disaster. Youth riots in Zurich, Berlin and Amsterdam are followed by Brixton, Toxteth, Moss Side. The Springboks trigger riots in New Zealand. CND grows and grows and grows. The dole queue grows and grows and grows. Bob Marley dies, a cadet tries to shoot the queen, and the Royal Wedding brings millions of royalists onto the streets. Abel Gance and William Holden die. One by one the hunger strikers die and bombs return to London. Afghanistan grows into Russia's Vietnam. Libya plays chicken games with the White House. Europeans discover themselves to be living in the next nuclear target zone and take to the streets. The Oi! cult meets the Orange People. El Salvador. The deathly duo Haig and Weinburger. The year of Tony Benn and the SDP. Solidarity and the Space Shuttle. The Commander of Nato forces in Europe misses terrorist bomb death by inches. Voyager has a close encounter with Saturn. Lech Waleska keeps on shining. Meg leaves the motel. 1982 promises to be exciting. ■ DICK TRACY 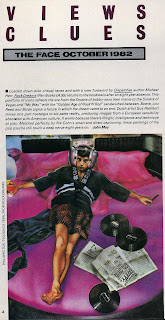 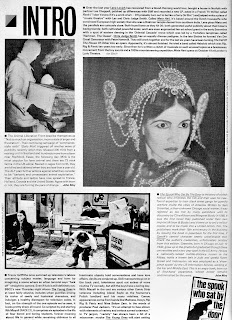 THE FACE No 30/October 1982 was a good issue for me: three stories in the Intro Section and a full spread at the back of the magazine which I was proud of . Great layout. 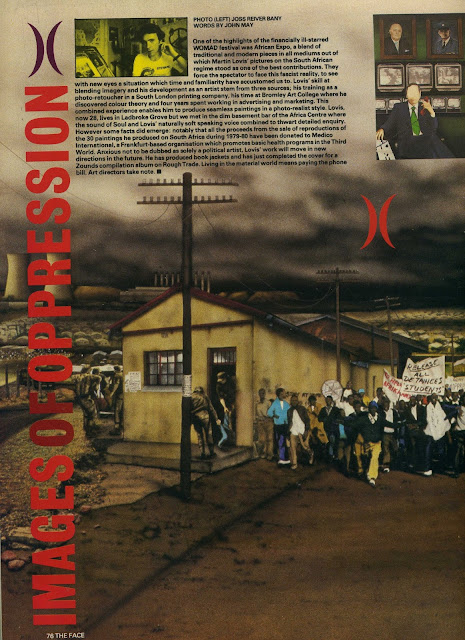 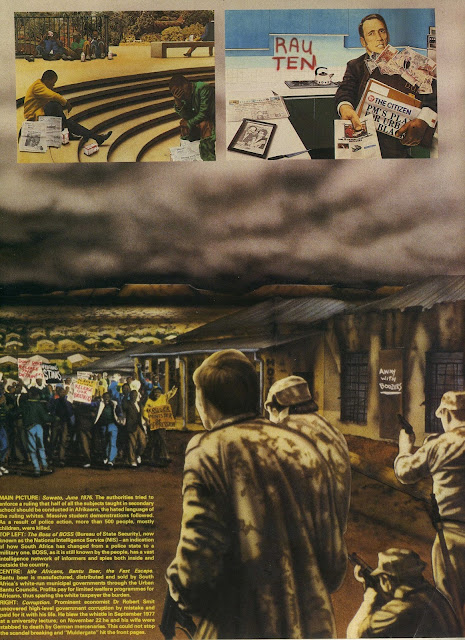 One of the highlights of the financially ill-starred WOMAD festival was African Expo, a blend of traditional and modern pieces in all mediums out of which Martin Lovis' pictures on the South African regime stood as one of the best contributions. They force the spectator to face this fascist reality, to see with new eyes a situation which time and familiarity have accustomed us to. Lovis' skill at blending imagery and his development as an artist stem from three sources; his training as a photo-retoucher in a South London printing company, his time at Bromley Art College where he discovered colour theory and four years spent working in advertising and marketing. This combined experience enables him to produce seamless paintings in a photo-realist style. Lovis, now 28, lives in Ladbroke Grove but we met in the dim basement bar of the Africa Centre where the sound of Soul and Lovis' naturally soft speaking voice combined to thwart detailed enquiry. However some facts did emerge: notably that all the proceeds from the sale of reproductions of the 30 paintings he produced on South Africa during 1979-80 have been donated to Medico International, a Frankfurt-based organisation which promotes basic health programs in the Third World. Anxious not to be dubbed as solely a political artist, Lovis' work will move in new directions in the future. He has produced book jackets and has just completed the cover for a Zounds compilation album on Rough Trade. Living in the material world means paying the phone bill. Art directors take note. 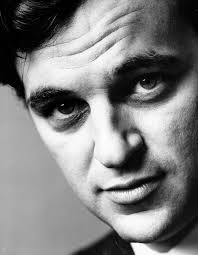 Bert Stern was at one time the highest paid photographer in the world, producing startling advertising shots and personality profiles, fashion portfolios and photo exclusives that were original, imaginative and distinctive. He wanted to make a movie before he was 30 so he took film cameras to the 1958 Newport Jazz Festival and the result is called 'Jazz On A Summer's Day', the godfather of all music documentaries, rated by Scorsese and Altman as one of the best films ever made. Featuring the first footage of Chuck Berry alongside Thelonius Monk, Louis Armstrong and a host of lesser-knowns, Stern took his skill as a photographer and applied it to the motion picture with great force. Looked at 25 years later it has a modern feel and retains its power intact. Packed with incidental detail, beautifully observed, it stands as one of the great music films.

Stern went on to photograph Twiggy in 1967, Elizabeth Taylor, Sophia Loren, Marisa Berenson and Marilyn Monroe- his pictures of her being featured in the recently published 'The Last Sitting' (Orbis £12.50). He was a patient of the legendary Dr Feelgood, who gave him B-12 shots with amphetamine and is credited as being the man who gave Cary Grant LSD. His empire collapsed, everyone thought he was dead, but his fortunes have recently revived. [Stern died on June 26, 2013. See Wikipedia]

A less lucky legendary American is featured in 'Lenny Bruce Without Tears', a startling black and white film compiled from newsreels, interviews, snatches of his club act and intimate footage - spliced together with talking heads like Kenneth Tynan, Paul Krassner and Malcolm Muggeridge. If you've never seen Lenny in action this will hit you between the eyes. It's a powerful and disturbing document from the underground which raises the question as to where the radical protesters of the  Eighties are hiding. Both films are available through Nikon Video, an independent distribution company. Ask for them at your local video dealer. You will not be disappointed.'