THE GENERALIST is fascinated with the history of art and has accumulated a substantial library on the subject. The official version of art history has always seemed flawed and male dominated. Women artists have consistently been overlooked, underplayed or deliberately ignored.
Here is a round-up of books that address this issue, provide an introduction to 50 women artists you should know and the Hidden work of Frida Kahlo. 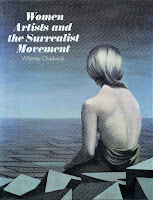 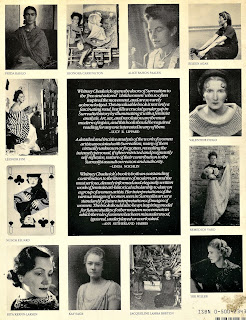 Whitney Chadwick is one of the most pre-eminent figures in this field with numerous important titles to her credit. 'Women Artists and the Surrealist Movement' was first published in 1985 and I bought it second-hand in the late 80s/early 90s. [A new edition with Frida Kahlo on the cover came out in 1991] As a fan of the Surrealists I was mainly unaware the role women artists had taken in the movement until reading this book. It opened my eyes to the bigger picture and lead me to Chadwick's seminal work 'Women, Art and Society'. The revised 2nd edition I have has a Paulo Rego painting on the cover. The book has now reached a 5th Edition (pub. 2012) with a suitably modern cover. Both books are published by Thames & Hudson. Read this and your views on the history of art will be changed forever. 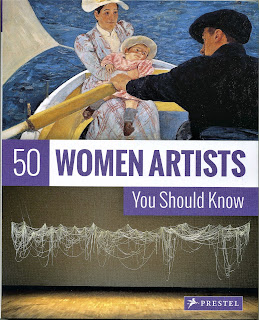 Newly republished with a new cover is '50 Women Artists You Should Know' by Christiane Weidemann, Petra Larass and Melanie Klier [Prestel.2017]. This is a good introductory book which simply and effectively profiles many of the the usual suspects - Frida Kahlo, Georgia O'Keefe, Camille Claudel, Berthe Morisot for example - but also introduces some remarkable unfamiliar names. It stretches from Catharina van Hemessen [1528-1587], the first Flemish woman painter who is known today (her work represented by a self-portrait when she was 20) to a range of modern artists including performance artist Marina Abramovic, Cindy Sherman, Tracey Emin and lesser known figures like Iranian photographer Shirin Neshat and video artist Pipilotti Rist. There is beautiful and fascinating work shown and the accompanying essays whet the appetite for learning more.

In a Previous Post: THE FUTURE IS FEMALE I reviewed a great graphic novel on Kahlo which led me to view the brilliant movie 'Frida' [2002] directed by Julie Taymor and starring Salma Hayek as Kahlo and Alfred Molina as Diego Rivera.

During her lifetime, Frida Kahlo's work was rarely exhibited. She had her first and only one-woman show in 1953, the year before she died. Her home La Casa Azul (the Blue House) in Mexico City  was opened as a museum in July 1958. For many years her work was neglected.

The first modern  recognition came in 1978 with exhibitions in Mexico and Chicago and interest in her work and life was renewed due to the feminist movement for whom she has become an icon. In 1982 an exhibition of her work alongside photos by Tina Modotti was shown in London, several European countries and New York. In 1983, an acclaimed biography by Hayden Herrera drew further public interest. Since the film's release in 2002, that interest has escalated and has been dubbed "Fridamania". Kahlo is now one of the best-known women artists in the world. 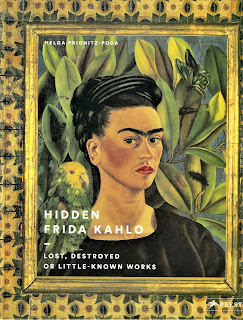 All of which makes the publication of this superb new book  'Hidden Frida Kahlo' by Helga Preignitz-Poda [Prestel. 2017] of great interest. The author has spent 40 years absorbed with Kahlo's work and her catalogue raisonné was published in 1988. It contained 270 items of which around 145 were small format oil paintings.

The exhibitions that have been staged worldwide, which have each generally attracted some 300,000 visitors, are based entirely on only two large collections in Mexico.

This books, says the author, is about the works that are known to exist but cannot be borrowed and shown because they are lost, are destroyed, or are in collections that are inaccessible or with collectors who refuse to lend them.The Frida Kahlo museum were unable to grant permission to print even works from its holdings that have been published elsewhere.

The author's purpose is 'to increase the public's access to works by Frida Kahlo that have never been exhibited or can only be seen in private.' So here are 125 works that are non-loanable: 26 are lost oil paintings and roughly 50 are in inaccessible collections. Eighteen drawings have been lost and at least fifteen are in inaccessible collections. So for the first time these works can be seen and discussed to add new facets to the public perception of this important artist. The author points out that these missing works are being copied by forgers. Forgeries, she says, are already an 'unbelieveable nuisance' with new ones appearing daily.

Helen Preignitz-Poda is a world authority and the intensity of her research is stimulating. She explains that Frida's paintings are packed with symbols, metaphors and rebuses that need to be decoded if we are to understand the true meaning she was bringing to the subject. The author writes in a highly readable and incredibly well-informed style. She brings the images to life, introduces the reader to the numerous individuals and subjects that Kahlo chose to paint.

Her frustration at not being able to examine many of these paintings "in the flesh" so to speak is palpable, as photos or reproductions of the works can be misleading. She challenges many of the existing theories with her superbly detailed knowledge. She has a lot to say about Kahlo's poems. Kahlo read widely and her work draws inspiration from multiple sources including James Joyce's 'Ulysses'and Homer's 'Odysseus'. She was steeped in the magical realism of Mexican culture and pre-Hispanic symbolism. Everything in her pictures means something if you understand the key. Above all, the paintings were about herself. She said: 'I paint my own reality'. The book ends with this powerful conclusion:


Frida Kahlo - whose work always revolved around herself - is perhaps so popular today, as queen of the selfie, because her constant self-reflection and loneliness represent the fundamental issues of our time, In the attempt to overcome overcome loneliness, in search of passion and love, and in the longing for closeness, the constantly questioning gaze directed towards the viewer is the driving force of her work. To this end she deployed a wealth of symbols and metaphors to articulate her desires. Just as selfies today - no matter which background they are taken against - generally document only the loneliness of the photographer. Kahlo's art is a deeply personal one, which in the triumph over pain touches universal human feelings. In this, her many self portraits are only the most striking examples of a widespread longing to be known understood and remembered.

This large-format book is beautifully produced on fine paper with strong reproductions. Each chapter opens with a striking full-page black and white photos that are themselves works of art. 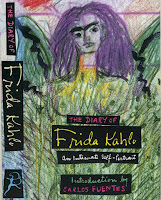 For Kahlo completists, another important title for the library is 'The Diary of Kahlo: An Intimate Self-Portrait [Bloomsbury /1995] This facsimile is wonderful, full of striking drawings, writings and paintings, which are explained in an appendix at the back by Sarah M. Lowe. Apart from the diary itself, the other valuable part of the book is a marvelous essay by the Mexican novelist Carlos Fuentes who saw her only once at a concert in the Palace of Fine Arts in Mexico City, when her entrance drew all eyes. It's a poetic and deeply understood vision of an extraordinary artist. 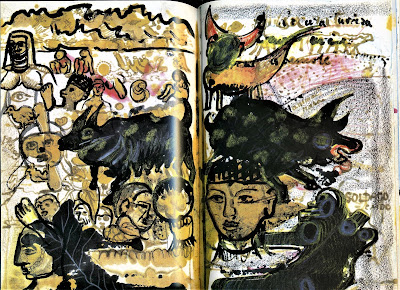