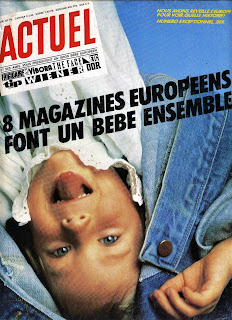 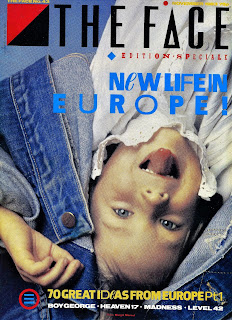 One of the most interesting issues of The Face in the 1980s was the European issue, which I became closely involved with.

Paul Gorman's writes: 'The "New Life in Europe" issue was a joint venture with like-minded Continental magazuines that shared stories or aspects of European culture as well as the cover image of a child by photographer Margit Marnul'.

The initiave came from Jean-François Bizot who had founded Actuel in Paris in 1967. The other particpants were Wiener in Austria, Oor in Holland, Etc in Sweden, Frigidaire in Italy, Tip in Germany and El Vibora in Spain.
Bizot's proposition was that each title would produce a major feature and these eight features would be shared between the magazines as would a section entitled '70 Great Ideas From Europe'.

In addition, each magazine carried out an opinion poll about their citizens'  knowledge and contacts withe other European countries. In an opening statement, The Face reported that the UK Gallup poll of 1,000 young people showed that Brits had the lowest rating. What the respondents throughout Europe shared was a longing for security, freedom and opportunity.

'These yearnings seem to be on alll of our minds at a time when we face the same economic and cukltural decline and share the same deep fears - not least of the imminent NATO build-up that threatens to turn Europe into a battleground for the superpowers.'

'Europe is a fragile idea, but not a new one. The bulk of this issue is about Europe, not somewhere we pay much attention to...but an abundance source of ideas, whether quaint, foolish, diverting or inspired.'

The then Features Editor Paul Rambali, told Gorman that The Face believed that Britain should embrace a more continental lifestyle. "We were actively militating for that. At the time pubs closed in the afternoon and at 11pm. We were living a noctural life in Soho which was much more cosmopolitan and that's what we wanted for the UK as a whole."

*
Around this same time period, Gorman points out the effect The Face had on other publications. The Sunday Times magazine, for example, was enlarged to the same dimensions as The Face. He writes:

'By November 1985, the all-encompassing interest in areas of design identified by Logan's magazine was one of the factors in the founding of British architectural magazine Blueprint by writer Peter Murray and design authority Deyan Sudjic. In tone and emphasis on presentation, Blueprint tooks its cue from The Face.'

The following year, I was commissioned by Blueprint to write a profile/interview with Jean-Francois Bizot, published in March 1986, who I had come to know as a result of my work liasing between The Face and Actuel. It is reprinted here for the first time. 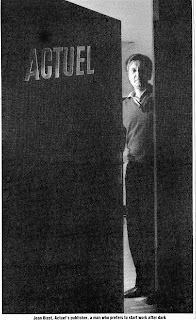 In November 1983 an historic publishing first took place when eight European photomagazines collaborated to give birth to "un gros bébé européen". For one month newsstands across the continent were decorated with the irreverent image of an upside-down mischievous child poking its tongue out.

The architect of this costly but worthwhile escapade was Jean-François Bizot, publisher and part-editor of Actuel which every month continues to disseminate its own brand of lively photojournalism to 260,000 buyers in many countries. Even if you don't read the language you get the message. Reports from Bangladesh next to Japanese style. The New Age network inside Gorbachev's Russia. Piss-takes of the leading French magazines. Serious investigations into right-wing fascist groups.

Bizot was an engineer, then an economic planner before turning to writing and journalism, turning out two novels and a book of essays before his life became Actuel. Now he owns 80 per cent of the company and surveys the rooftops of Paris from the magazine's customised offices (produced by the young architects Canal), all smooth, cream curved staircases and banks of windows, exotic plants and an air of creative business.

It is 3.30 in the morning, Paris time, and Bizot is midway through yet another all-night session. Yet he takes the time out to speak at length over the phone about the views his magazine so strikingly represents.

The current magazine is a third-generation product which has its roots in1968. Bizot says: "Out of the cultural revolution in France came the idea of the counter-culture, designed to create space and freedom for a new generation. The idea was to subvert bourgeois culture which we did for five years. Then the counter-culture became counter-productive, like a ghetto. So we stopped the magazine. It had been written, so we had to go somewhere else — further."

In the 1970s, he says, their main focus was towards England, Germany, the USA and Amsterdam where the creativity was coming from. French culture was seen to be behind the times. In search of new horizons Bizot and a small team kept publishing but in a new form, book-length almanacs composed of personal manifestos. "By the end of the 1970s we noticed a few things," Bizot continues. "French feelings were not behind the times anymore but the main media were still owned by old people and still very backwards. We wanted to go on. We had the idea that Paris could pretend to be the centre of the world and we could talk about things first. Information belongs to everyone; perspective is everything."

The "we" is important here. The final editorial decisions on the magazine are not taken by autocratic methods as in the comic books or movies, but by a group of four or five people who have worked together for a long time and who also have always written books as well. That kind of editorial depth and experience has no rival in England. Bizot says: "It is not possible to make the magazine alone.

Centre of the World

People have special interests. We have a group who wouldn't work in other places. When it works it's better than other places. Sometimes they're demotivated by lack of space.

At the turn of the decade this team were looking for their new perspective. They wanted a magazine that would be able to tell stories at length in the way that Rolling Stone did. But as Bizot astutely observes their "new" journalism wasn't new. That kind of realistic and detailed style was a 19th century way of telling a story before television, a style of which Balzac and Victor Hugo had been exponents.

Of course Hunter S. Thompson was different as Bizot admits "He influenced us. There was more freedom there with more modern words but we wanted to adopt a less macho attitude, without the bragging."

"We decided we would tell stories at length but with a post-tv attitude. You had to tell stories with pictures then they'd read them. We had a cinematic attitude towards storytelling. The writers would live the stories like actors."

This new approach characterised the Actuel of the 1980s and won them a wide and enthusiastic readership, not least for the originality of the magazine's design. But their innovations were quickly aped by others and, says Bizot, "things we had started became vulgar or cliched. We had to start looking around for more classical ways of handling things." So Actuel became an institution and then turned that to their advantage by using the solidity to tackle big problems journalistically in a new way others couldn't match.

Now new things are happening again. "Paris is getting interesting. We have waited 15 years for our generation to become creative again. More and more people are staying here rather than going to New York or London. A new style is emerging," Bizot claims. He believes a whole historical cycle is at an end. "Paris was the centre of the main force in Occidental culture — Cubism and the rest — until 1939. For the French, losing the War lasted 40 years. They were ashamed and self-denigrating. That self-defeatism is now over."

Pausing only to light a cigarette he adds force to his argument. "Creativity is not coming from you anymore. We still eat a lot of your products but now we are looking to Madrid, to the Arabs, to Africa, to the South. We are just at the borders."

It is clear that this will be a major preoccupation of Actuel in the next few years. Bizot says: "If you look at demographic projections we are the only country in Europe that will be expanding in population over the next 30 years and those people will be from the South. There are some racial problems but there is also much stronger interracial contact. We have less ghettos, certainly nothing like Brixton. Only Marseille looks like disintegrating. All that energy from countries with emerging ambitions will make things very healthy if the battle is to be won."

Bizot looks back to the European issue with regret, regret that the experiment didn't continue, as he believes it is our only chance to get rid of a tribalism that is worse, or at least as pronounced, as Africa's. As to the future Bizot is characteristically full of hope and ideas. "Our strategy is to be very visionary. I think we have to go on defending new forms, emerging cultures, the evolution of attitudes, supporting what is important, what needs to be expressed. The future leaves us with a lot of work to do."