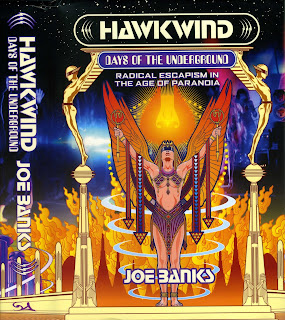 Who would have thought at the time that such a book would exist.  An encyclopaedic multilevel 500 page volume on the history of Hawkwind which I'm privileged to have a copy of.

It's elegantly produced, finely illustrated (great cover work from John Coulthart) and packed with original interviews and interesting essays not only on the rise of Hawkwind and their long legacy and numerous line-ups but also on the underground culture  and science fiction scene that surrounded them..The limited print run edition has already sold out but a paperback version is due in a while.

We were there in the early '70s in the Ladbroke Grove scene, working on Frendz magazine in our office on Portobello Road. During that early period Hawkwind would assemble there before going down the road to the Mountain Grill for a meal before heading off for the gig. Mike Moorcock was also a regular visitor as he lived down the road at the time he was editing New Worlds'  magazine and was interacting with the band himself, co-writing some of their material. The interviews with Mike are brilliant

When 'Silver Machine' hit the charts, I was briefly recruited  to join Stacia and Renée LeBallister as a dancer on that successful tour. I lasted seven shows before both sides agreed that was enough. I have written before on my links with the band and about my bolero jacket which was specially made for me. I saw their all-night shows with the Pink Fairies at the Seven Sisters Club (also worked on the door), at the first Glastonbury Festival, hung out in their geodesic at Bickershaw Festival in May 1972 and got spiked up by them at a benefit concert they played with Mighty Baby in West London. 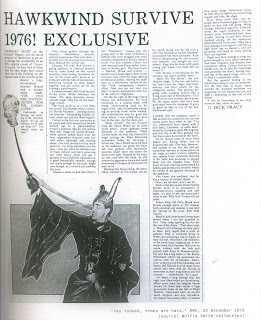 My tiny memories are not included in the book (no worries) although a copy of the piece I wrote on Hawkwind for the NME is published under my pen name Dick Tracy.

[You can now see many of my Dick Tracy articles @ generalistarchive.co.uk]

There are three accounts of my Hawkwind connections
https://hqinfo.blogspot.com/2009/02/my-bolero-jacket-1-hawkwind.html