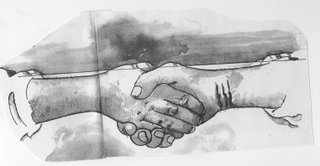 This piece was originally published in the Fall 1987 issue of the Whole Earth Review, the successor to the Co-Evolution Quarterly, itself a spin-off from Stewart Brand's Whole Earth Catalog operation. (Illustration: Don Ryan)

I want to build a bridge across the .

I'm not the first to have the idea. The honour for that belongs to Joseph Strauss, the man who went on to design one of the world's great bridges — the . In 1892, for his graduation thesis from the , he outlined his plan to build a railroad bridge across the .

A look at the map will show you the attractions of such an idea. The separates the of the from the of the and is about 85km (53 miles) wide at its narrowest point.

Contained in the narrow strip of sea between these two specks of land is not only the imaginary border between the two countries but also the international date line. In other words, this small stretch of water separates from , the from the , and today from tomorrow. The advantages of bridging that gap should be obvious to all.

For the historical record, the Strait was discovered by and named after Vitus Bering, a Dutchman who was sent by Peter the Great to explore the eastern margins of to see if it connected with . He successfully rounded the on the Russian side in 1728 but completely missed see­ing the North American coast due to dense fog.

owned both sides of the Strait until , when Captain Aleksei Peschchurov, repre­senting the Emperor of Russia, formally sold to Brigadier General Lovell Rousseau, representing the , for some two cents an acre.

American popular opinion of the time held that it was an expensive deal at that price and dubbed the useless wilderness Seward's Folly after then Secretary of the Interior William Seward, whose determina­tion led to the acquisition of these 375 million acres.

The fossil record indicates that a land bridge more than 1,000 miles wide, known as or Beringia, existed at two different times. The first was some 65,000-35,000 years ago, after which it was submerged. It was later reestablished during the Later Wisconsin glacial period — about 28,000-25,000 years ago. This second bridge lasted for another 15,000 years before it was completely submerged by the advancing sea. Not only did it separate from , but it also cut off the Pribiloff and from continental .

During the periods that the land was linked there were intensive migrations of plants and animals from continent to continent. The latest evidence also suggests that the original native nations of the American continents (north and south) came over the land bridge from in three waves of migration.

The first wave came from northern and some 20,000 years ago. These people were the ancestors of the Indian tribes known collectively as the Amerind, including the Aztecs, Cherokee and Algonquins.

The second wave came slightly later from north­eastern , people called collectively the Na-Dene, ancestors of the Navaho and Apache Indians, the Tlingit and Haida tribes of the American Northwest. Some anthropologists believe a "third wave" of migrants arrived 10,000 years ago and became the ancestors of the modern Inuit and Aleuts. This third-wave theory is still controversial.

[Two recent articles examine these ideas in more detail: "The " by A. P. Okladnikov (The Alaska Journal, Autumn 1979) and "Getting One's Berings" by Knut R. Fladmark (Natural History, November 1986.]

Such evidence suggests a spectacular opening cere­mony which might be staged when the bridge is unveiled: present-day Amerindians handing over buffalo skins, quetzal feathers and parchments in return for mammoth tusks and magic fungi from the Siberian steppes — an ancient kinship rekindled. But I am getting ahead of myself.

The superpowers have conveniently ignored their common ancestry. In 1984, for instance, a maritime boundary meeting was opened to try to update the demarcation lines as a preliminary to mineral and oil exploration in tbe region.

By the end of the year, talks had broken down. The stumbling block was an area of ocean south of the Strait called the , situated 400 miles from the and only 150 miles from the . The Americans claim the basin under the 1867 deal and have sold exploration rights in 20 tracts in the disputed zone to Amoco, Arco and Union Oil. The Russians regard the salt as "provocative."

No doubt plans for the bridge would come up against this sort of international bureaucracy. I am sure one can explain the value of such a link both aesthetically, commercially, and as a means of establishing more stable relations in the world. After all, connecting the with the Eurasian/European, African continental mass could be seen as plate tectonics in reverse.

Of course, there may be construction difficulties and for this I will have to take specialised advice. One colleague has suggested using "icecrete" — ordinary freshwater mixed with wood fibres for strength, poured into a skin made either of concrete or laminated plastic and then frozen and compressed tightly for extra durability and shape.

It occurs to me that perhaps the bridge couk! be simply conceptual — a giant hologram with lasers on both sides of the channel. Naturally, the funding could come out of the SDI budget.