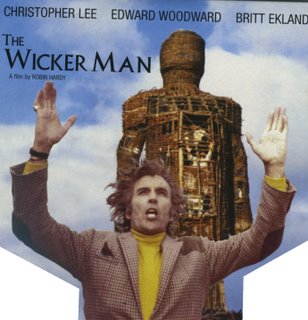 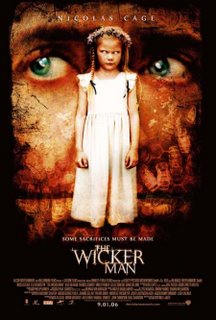 The 1973 film 'The Wicker Man' is not only one of the most enduring of modern cult films and one that repays repeated viewings but its soundtrack has also provided inspiration to a new generation of British folk musicians, according to a fascinating piece by Will Hodgkinson entitled 'It was a way into a magical world.'

More worrying is the news that Neil LaBute has done a remake which is due for UK release on September 1st. It stars Nicholas Cage in the Edward Woodward role. Cage claims: "My late friend Johnny Ramone invited me to come over and see this movie The Wicker Man. "I was extremely disturbed by it and it stayed with me for a couple of weeks." (www.cagefactor.com)
Christopher Lee's character, Lord Summerisle, is replaced by the head of a matriarchal society, played by Ellen Burstyn, and the action is set off the coast of Maine.Yes, its being Americanised.

Acording to LaBute in an interview with Total Film: "I always loved the movie and I loved the script in particular, but I never thought that it was completed so well that it couldn't be touched again...." You can read the screenplay review here.

Speaking at the Vancouver International Film Festival Trade Forum, LaBute said that when he first saw the movie, he felt it was a "strange kind of creepy thing" and said in an interview that it could bear being remade, but people who like it "are occultists." The intyerview continued: What does he like about the original? "Not the songs: they went. And the strange half-naked girl. The story and the ending really works," he said. Oh dear.

Wicker Man director is flaming furious over Hollywood remake
Brian Pendreigh/The Scotsman (11.9.2005)
'He gave the world arguably the most iconic Scottish film ever made but a US remake which adds a swarm of killer bees and changes the sex of a pagan lord has proved too much for Robin Hardy. The original director of The Wicker Man has called in his lawyers to have his name taken off promotional material for the $40m movie even before lead star Nicolas Cage has finished filming. "The amazing thing is that all the publicity keeps on saying that I have written the screenplay, which is obviously not true," says Hardy, who did not even take a writing credit on the original, though he worked closely with writer Anthony Shaffer.'

According to The Movie Blog: Robin Hardy and Anthony Shaffer are hard at work on their new movie which, they claim, is a 'reimagining' of their earlier work. Called 'May Day' (another source says 'Cowboys for Christ'), it revisits the theme of paganism in modern Scotland and follows two young American evangelists who discover the Border ridings are more than just a quaint tourist attraction. Shooting was meant to begin in Scotland and Texas this spring and 80% of the £3m budget was in place at the time the story was written. (25 November 2005). Vanessa Redgrave and Sean Astin from 'Lord of the Rings' have signed on for it.