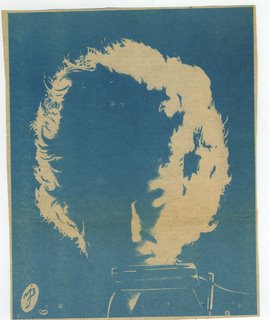 DJ DYLAN
Each hour-long show on XM Satellite Radio is composed of Dylan's own hand-picked tracks, and follows a theme - the first being Weather followed by Mothers, Drinking, Cars onto such topics as Coffee, Cigarettes, Marriage. Divorce. The track listing for these first four shows can be found here. The shows are recorded at Dylan's home or on the road

Lee Abrams, XM's creative officer, spent 18 months of negotiation in order to set the Dylan show up. Read his direct first-person account of the events leading up to showtime (in 3 parts) here.

Dylan is the latest big name to be drawn into a battle for radio subscribers between XM Satellite and its main rival Sirius Satellite Radio Inc. See full story: 'Dylan the DJ? You're just gonna have to get used to it' by Jamie Wilson (The Guardian).

'Hey Mister DJ...' by David Smith is The Observer's exclusive preview of the first show.

To these ears: Dylan is a radio natural, a medium that inspired him as a kid back in Hibbing. The programmes are a real joy to listen to, a bit like a musical version of 'Chronicles', mixing a wide range of largely vintage American music with modern tracks, trivia and suprises, occasional interviews and lots of on-air chat from BD himself, full of amusement and erudition. Bob takes great delight in reading out many of the lyrics from the music of what Greil Marcus calls 'wierd, old America.' His voice is stagy, tricksy, waspish, downhome. he never misses a beat and
everything flows perfectly. Like he was born to it.

H ere are some excerpts of Bob's remarks from the Mothers show, broadcast on Mother's Day, as transcribed by the New York Times:

Tommy Duncan/"Daddy Loves Mommyo"
His real name was Thomas Elmer Duncan, born on January 11, 1911, in Whitney, Texas — full of iodine and iron. He won an audition against 66 other singers to join Bob Wills's Light Crust Doughboys, who later became the Texas Playboys. Tommy Duncan left the band in 1948, recorded a number of songs including "Gambling Polka Dot Blues," "Sick, Sober and Sorry" and "There's Not a Cow in Texas" — lot of fuzzy logic there. But in honor of Mother's Day, here's a song. Tommy Duncan, "Daddy Loves Mommyo" — no fatty acid in there.

Buck Owens/"I'll Go to Church With Mama"
Buck Owens. Come out of Sherman, Texas. Made his way to Bakersfield, California. In the 1960's, the Beatles recorded a song of Buck's called "Act Naturally." In those years Buck had 39 chart hits, 19 of 'em at No. 1. Hey, let's not forget "Hee Haw." Never missed it. I still remember some of them jokes from "Hee Haw": "My mother-in-law's very neat — puts paper under the cuckoo clock." Here's Buck singing about hymns that warm your heart in the sweet by-and-by, that chapel in the sky.

Bobby Peterson Quintet/"Mama Get the Hammer"
Some songs you don't have to talk about; they just say it all: "Mama get the hammer, there's a fly on baby's head."

Ernie K-Doe/"Mother-in-Law"
Today's e-mail comes from John Rudolph. ... He writes, "Dear Bob: I've got a hammerhead of a mother-in-law, an ugly, evil-lookin' old woman, so pitiful. She's careworn, drawn and pinched — gaunt and lank. I bought her a new chair, but she won't let me plug it in. She belittles me, depreciates me, disparages me. She downgrades me, berates me, censures me and condemns me, libels me and raps me, dismisses me and rejects me. Could you please play a song for her?" Well, thanks for the letter, John. Your wish is our command.

LL Cool J/"Mama Said Knock You Out"
Don't call it a comeback, he been here for years, rocking his peers, putting 'em in fear, making tears rain down like a monsoon, explosions overpowerin', over the competition LL Cool J is towering. LL Cool J — stands for Ladies Love Cool J.

UK citizens cannot subscribe to the shows unless they have a US billing address. Presumably the same applies to the rest of the world.

DYLAN ENCYCLOPAEDIA
The postie arrived with my copy of 'The Bob Dylan Encyclopaedia', yet another weighty tome from the pen of Michael Gray, following the author's jumbo-sized work of criticism and erudition, 'The Song and Dance Man III: The Art of Bob Dylan', which went into its 5th expanded and revised reprint in 2004.

This new black-bound 736 page hardback is an equally delightful oddball reference work, containing many different kinds of entries which Gray describes as follows: 'some key moments fromDylan’s career and life; singers, musicians, songwriters and composers who have influenced Dylan and/or worked with him; writers, poets and other non-musical cultural figures who have impacted on Dylan’s work and/or who are mentioned within it, in each case delineating the sometimes surprising ways in which they connect to Dylan’s work; critical assessments and factual details (including place and date of recording, date of release and original catalogue numbers) for all Dylan’s albums and for individual songs from all through Dylan’s decades of work; critical assessments and factual details on Dylan’s own books and films; relevant music critics, authors of books and major websites on Dylan; and topics like artists v. critics, angels, Dylan interpeters, the co-option of real music by advertising, early 1960s pop music, Beat poetry, rock’n’roll, country blues, pre-20th century American poetry, Dylan fanzines, cowboy heroes, the use of film dialogue in Dylan’s lyrics and many more.'

Th longest entries by far are Gray's critical disquisitions into individual tracks in which Gray summons up an entire lumber room of references and teases out every last drop of meaning - the entry for the track 'Dignity' for instance, is 5pp long. The biographical pieces are excellent - very good entry on Ramblin' Jack Elliott for instance. He is quite tough on his fellow Dylan critics and writers and, unusually for a reference book writer, includes an entry on himself!

This is a book full of delights, unusual highways and byways, strange connections, original research, refreshing insights and quirky opinions. Turn to the entry on Duluth, Minnesota and its clear that Gray has not only been there but also driven many a country mile following the directions in Dave Engel's book 'Like Bob Zimmerman Blues: Dylan in Minnesota'. In fact, Gray has devoted the largest part of his working life to date chasing Bob Dylan's art and his love and enthusiasm for it permeates every page.

His intro concludes: 'If in 100 years time Dylan's art goes unheard and discounted, well, in 200 years time it may bounce back. If not, The Bob Dylan Encyclopaedia, might well help some scholar of the future to sift through the rusted nuts and bolts of our mistaken enthusiasm.'

Final note: the book contains a disc at the back, a non-printable searchable pdf packed with cross-references. (Did I mention that the typography is very good and that the book smells really nice)

Michael Gray is doing lots of promo, personal appearances, radio shows and the like in the UK
and in the US. Check out his blog for further details.

THE GREAT WHITE WONDER
Not included in the Encyclopaedia is an entry on Dylan Bootlegs (history of same - there is an entry on all the 'official' bootleg series) in general and 'Great White Wonder' in particular - not only the first Dylan bootleg but also the record that ushered in 'rock bootlegging'.

I wouldn't have thought about any of this had not a beat brother lent me a hardback copy of 'Bootleg: The Secret History of the Other Recording Industry' by Clifford Heylin [St Martin's Press/New York June 1995]. This book is extremely hard to find and expensive to buy. It is a primary source on this topic, full of original interviewers with the leading 'bootleggers' of several different decades.

The book is permeated with Dylan bootleg stories and the diaspora of releases of varying quality in many countries. But let's concentrate on the Great White Wonder - hereafter known as GWW - documented in detail in Chapter 3: 'The First Great White Wonders'.

Briefly: A 14-song acetate - drawn from the summer 1967 Basement Tapes sessions of Dylan and the Band - were being circulated within the music industry and played on the radio but were not made publicly available. Dylan had not released an official album for two years.

Michael O heard 'Wheels on Fire' on an underground radio show, located the tape at Records and Supertape on Peco, LA but never did anything with them. It was down to 'Dub' and Ken, also in LA, with some funds from the Greek, who issued 1-2,000 double-albums, in a white cover, white label. They got friend Patrick, an army deserter, to go into the stores to sell them at $12 each.

Immediately he found a demand, first off at a bookstore on Fairfax owned by the LA Free Press. The 'Jewish woman' they spoke to was v. enthusiastic, ordered some and named it right then and there - Great White Wonder. Dub and Ken bought a rubber stamp.

Two LA record store owners thought they'd get in on the act, got hit by an injunction from Columbia Records, gave-up 'Dub' because they thought Dub's girlfriend had snitched them to Columbia's lawyers. However Dub and Ken hi-tailed it to Canada to 'run a gas station' and Columbia's legal action ground to a halt. The cat was out of the bag and a new industry was born.

DYLAN MOVIE
Todd Haynes' told 'The Times' in 2005 that Dylan was ‘too complex' to be played by a single actor, adding: 'I am setting out to explode the idea that anybody can be depicted in a single self.'Haynes is directing a $20 million movie entitled ‘I’m Not There’ (aka ‘I'm Not There: Suppositions on a Film Concerning Dylan’ ) the first biographical screenplay about Dylan, which was scheduled to start filming in July in . Christine Vachon, principal of Killer Films and Dylan's business manager, Jeff Rosen are producers. Dylan assigned the filmmakers the rights to his life story and music for the film in June 2004.

Dylan will be played by seven different actors to represent the artist's ever-changing personas, including an 11-year-old child and a black woman. Announced cast list: Heath Ledger (who replaces Colin Farrell), Richard Gere, Christian Bale, and Kate Blanchett (who’ll play an aspect of Dylan, an androgynous singer-songwriter named Jude), Michelle Williams (a model named Coco Rivington) Julianne Moore, and Charlotte Gainsbourg. It is not clear from the reports whether Dylan himself will appear in the film.

Born , in , Todd Haynes has his roots in the ‘New Queer’ cinema movement. He was famously sued by Richard Carpenter for his 1987 film, ‘Superstar: The Karen Carpenter Story’ (which uses Barbie dolls as actors) and was removed from distribution. His 1991 film ‘Poison’, based on the writings of Jean Genet, partly funded by the National Endowment for the Arts, was attacked by right-wing family groups in the as inappropriately federally funded ‘filth’. He is known to a broader audience through movies like the glam rock inspired ‘Velvet Goldmine’ (1998), and the Douglas Sirk inspired ‘Far From Heaven’ (2002).