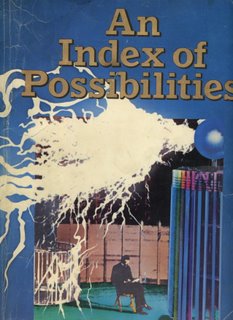 This week we celebrate the 150th anniversary of the birth of Nikola Tesla, one of the most remarkable inventors and visionaries the world has ever seen, who is only now receiving the worldwide regard his talent and ingenuity deserves. In fact, UNESCO has declared 2006 the 'Year of Nikola Tesla,' according to 'From Fishing Rods to Death Rays: the man who invented the 20th century' by Vesna Peric Zimonjic in The Independent this week.

The best single round-up ofTesla information can be found at A Blog Around the Clock by Coturnix, a link I found while visiting Pharyngula one of the most popular science blogs written by a scientist on the net, according to Technorati.

That's Tesla on the left, featured in the cover of our first
published book - An Index of Possibilities (1972. Wildwood House/Pantheon Books). This giant alternative encyclopedia - hard to locate these days, even at internet second-hand book sites - was the work of a baker's dozen of us when we were mainly in our twenties, working from an office at 2 Blenheim Crescent in Ladbroke Grove, just off Portobello Road. More extended reminiscences about the Index - now a true cult book - in due course.
at 3:50 pm

hey there - nice blog. i just interviewed Helen Caldicott and was talking to her about James Lovelock. tried to remember where i'd read about his suitcase bit and sent her the link to www.nuclearspin.org/index.php/James_Lovelock

Anyway, i'll be posting the interview in a week or so. Just created the blog i.d. so i could drop you a message actually - wanted to say 'good one'. i'm skecptical about the ability of blogs to change anything, but think that when they're not functioning as search-interference they're a good way to get info on record and available. yours is definitely one of the more effective i've seen. good one!