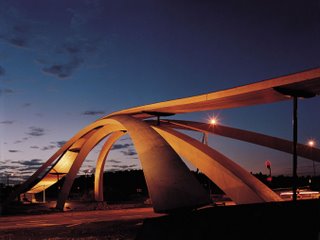 The first Leonardo Bridge in the town of As, near Oslo in Norway. Photo by Terje Johansen. This article was originally published in my Tree News magazine [Autumn/Winter 2005]

A visionary project aimed at building a global network of landmark wooden bridges on every continent, based on an original design by Leonardo da Vinci, is the brainchild of Norwegian artist Vebjørn Sand.

According to his mission statement: This global public art and civil engineering project, honouring the legacy of curiosity about the natural world left to us by Leonardo, integrates the disciplines of art, architecture, natural sciences, history, civil engineering and mathematics, linking people around the world.'

Leonardo wrote a letter in 1502 to Sultan Bejazet II in which he outlined his plan to bridge the , an inlet between present-day and Pera in , with a 340m-long stone bridge, with a 240m -long free span and a 40m clearance for ships. If built, it would have been the greatest bridge of the ancient world but the Sultan remained unconvinced and, like many other of Leonardo's visions, it remained unrealised in his lifetime.

Sand was thirty when he first saw Leonardo's drawing for the bridge in a show of the master's inventions held in in 1996. He took his modified and shortened version of Leonardo's original vision to the Norwegian Public Roads Administration, which agreed to fund the project. The resultant pedestrian footbridge in the town of As outside Oslo, built by Knut Selberg of Trondheim and the Moelven Group structural engineers at a cost of $1.47m, was dedicated by Queen Sonjaof Norway on October 31, 2001 .The glue-laminated wooden bridge, smaller than Leonardo's original design, is 110m long, 3m wide, has a span of 45m and sits 8m above a major highway.

With his first bridge completed, Sand is now working to realise the grander vision of a network of such bridges around the world. As he imagines it, in each location the design of the bridge will be modified to suit local circumstances and conditions.

Melinda Iverson, who is handling international liason for the project, told Tree News: 'In our vision, each new footbridge would be like a reinterpretation of a passage of music. The elegant geometry of the design would be created in local materials by our team in collaboration with local artisans and engineers.'

Now comes news that a 15-foot long scale model of the bridge will be one of the exhibits in ‘Leonardo da Vinci: Experience, Experiment and Design, which will be running at the V&A in from to January 2007.

According to the Project’s latest press release: ‘Projects for , , and the - and hopes to finally construct the Project in - are currently being discussed. A public art project on , in the to build an authentic hand-hewn stone version of the design is also planned.’

More details about the project: www.leonardobridgeproject.org

After being expedition painter for two Norwegian expeditions to Antarctica, he displayed his work back in Oslo in an outdoor gallery made of ice and snow that drew 150,000 visitors. He also created a "Norwegian Peace Star" first unveiled at the 1999 Nobel Peace Prize ceremony then permanently installed outside the Oslo Airport. It is a 135-foot sculpture, the tallest in Norway, using the platonic solids incorporated into a star form discovered by the astronomer, Johannes Kepler. (News of Norway, November 07, 2001)