In the following August 26th issue of NME I wrote this piece which looked at the plight of British drug prisoners in foreign jails.  For this reprint I have added photos and other material to make it more understandable to modern day readers:

Timothy Davey became the highest profile drug prisoner of his time when he was found guilty in an Istanbul court on March 1st 1972 of trafficking in hashish. He was arrested in 1971 trying to sell 25 kilos (56lbs) to try and raise money for his family who had been on the hippie trail. He was sentenced to six years and three months imprisonment. Before the trial he had spent 7 months in Sagamilcar prison on remand.  Billy Hayes told the London  Evening News: “We were in the same cell block for a year and I got to know him very well.” Timothy and his mother contrived an escape from prison after a few months by dressing him in girl’s clothes. Rearrested at the border, he was sent back to a juvenile prison on the coast at Izmir.He was finally released in May 1974.
MP Maureen Colquhoun asked the Secretary of State for a list of British citizens being held in foreign countries for cannabis offeences on 1st June 1978 (around the time ‘Midnight Express’ was released. There was a total of  164 – one of which was Danny de Souza, the main subject of NME article. 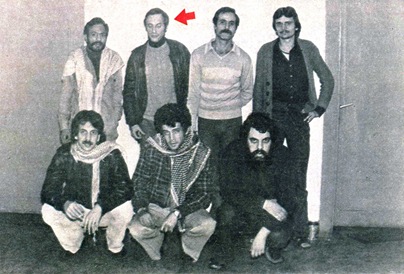 This picture of Danny de Souza (arrowed) appeared with an article in the regular feature ‘A LIfe In The Day Of’ in the Sunday Times magazine  in 1981, in which he recounts how he spends his days in jail in Izmir, Turkey.
DANNY DE SOUZA, a Londoner from Notting Hill Gate, was arrested in Turkey on May 7, 1975, and charged with importing five kilos of hashish.
After a lengthy trial he was finally sentenced in January 1976 to 30 years imprisonment, later reduced to 18 years.
In the UK the same offence would bring him a four-year stretch. As it stands, he will be in a Turkish cell until 1991.
The only British prisoner in Byrampasa Jail in Istanbul, Danny is having a hard time, as evidenced by his letters from prison — to which Thrills has gained access.
In one letter, asking Release to send money, he writes: "I don't know if you know much about this prison but briefly, with a murder rate of at least one a month and daily knifings, it's not the ideal place to owe money."
Another letter says: "I've got an unpaid job — sticking needles into hypochondriacs and wiping up the blood from Turks who've freaked out and stuck their heads or limbs through a window."
Danny has also been ill and required hospital treatment. He writes: "Is there anybody I can turn to in England to pay out money for . medical expenses? I've got an ulcer and every week I have to find £1.50 to pay for drugs."
He comments: "I got suddenly uptight when I realised that England is about the only country in Europe that doesn't fork out medical costs or at least extra food. Even the Greeks and Bulgarians are better off."
It took Danny over a year even to get newspapers, razor blades and other such essentials from the local British consul, and then only because of Release pressure.
This apathetic attitude both here and in Turkey was confirmed to Thrills by another Briton, who agreed to talk to us providing his name was withheld.
He said he had received a 2 1/2-year sentence for possession of just 1 1/2 grams of grass (enough for a small joint). He claimed this was by no means an exceptional sentence. The attitude of the British consul, he observed, was that drug prisoners had just brought it on themselves and that they were damaging the image of Britain abroad.
The legal machinery does exist for foreign prisoners to be transferred back to their own country to serve out their sentences, both under Turkish law and through a new European convention which many other countries in Scandinavia and Europe have signed. Britain, however, seems unwilling to take advantage of this — although public pressure, as in the case of Timothy Davey, has brought results in the past.
Apart from Danny de Souza, Thrills has obtained the names of three other drug offenders currently in Turkish jails. They are: Albino Cimini from Swansea, serving 26 years for trafficking, use and possession, and Mrs. Evelyn Joy Philips and Miss Effie Smith, both in their 20s. All are serving time in the Dogubayazit Prison in Eastern Turkey.
However, this is not just a Turkish situation. There are British drug prisoners, in Morocco, Algeria, Spain and in many countries in the Far East — how many, no one is quite sure. Despite the size of the problem only Release, with its limited budget, is working to help these people, sending them money and supplies and fighting to get them out.
Considering their powerful influence, many people were hoping that Amnesty International would get involved. Their attitude, however, is that under their charterf they cannot adopt the cause of drug prisoners unless evidence can be produced of torture or ill-treatment. They have even gone so far as to issue a press release disassociating themselves from the film Midnight Express and from the proceeds of the benefit, which hopefully will now go to Release.
So it seems that Amnesty have now effectively washed their hands of the whole matter; perhaps they missed the letter in a recent Evening Standard from a guy who claimed that as far back as 1967 he had offered evidence to Amnesty on the use of the torture known as Falaka in Turkish jails.
Keith Martin wrote in the Release newsletter: "It seems that unlike tourists who are arrested for 'plane spotting' or stirring up Ukrainian unrest (who warrant the consideration of the Foreign Office) drug offenders get a very special non-status."
Only public pressure can prevent Danny and hundreds like him from rotting away out of sight and out of mind.
In one of his letters Danny wrote to Release: "Sometimes I get paranoid flashes that the MAN has taken control of you and now you're fighting a holding action to keep this absurdity from bursting wide open. Please prove me wrong."

ADDITIONAL &  EXPLANATORY NOTES
1. While in jail, Daniel de Souza wrote a book about his prison experiences - ‘Under A Crescent Moon’  - published by Serpent’s Tail in 1989 which is still available. The author bio says: ‘Daniel de Souza was born in a refugee camp in Wiltshire in 1945. He grew up in London and in 1975 was arrested attempting to smuggle dope into Turkey. He served twelve years of his life sentence in jails in Istanbul, Antakya and Izmir. [This suggests he was released in 1987].
There is a recently piece about his book in Weekly Zaman, an English-language site for Turkish people, part of a series entitled ‘Learning about Turkey through literature.’ This piece says: Daniel de Souza was eventually released. Remarkably, he was so captivated by the spirit and warmth of the Turks he met in prison that he chose to live in Turkey.
2. Release referred to in the article is a great organisation that provided legal help to people busted under British drug laws. It was founded by Caroline Coon and Rupert Harris in 1967 and is still in operation. 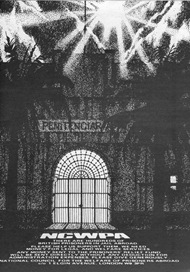 They initially set up a Foreign Prisoners Section of their organisation which, at the time I wrote the piece, had become  a spin-off charity – the National Council for the Welfare of Prisoners Abroad. It has survived and developed over the years and is now known as Prisoners Abroad.

According to their latest statistics they are helping 1,229 British people held overseas in some 96 countries. Sixteen of these are in Turkish prisons. It is not clear how many of the global total are in prison for drug offences.
at 8:35 am