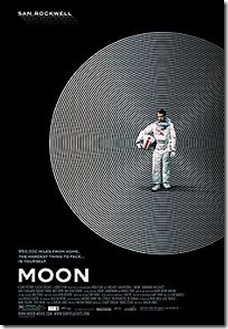 Scant days after the 40th anniversary of the Moon landing, I'm in the Duke Of York's cinema with sons Alex and Louis watching 'Moon', the first feature by David Bowie's son  Duncan Jones. Ground control to first-born son.

Its is rare these days to see a space movie of substance. Set on the dark side of the moon, at a remote mining camp operated by just one man, this is a film with a lot of psychological edge, drenched in the feel and resonance of many previous space epics (principally 2001, Solaris and Alien) but which manages the difficult feat of being original, creating its own ground.

Co-scripted by Jones and Nathan Parker, the action centres on actor Sam Rockwell who dominates the entire film. This is his greatest role since 'Confessions of A Dangerous Man'. Its also got a great score by Clint Mansell.

One of the things that is most interesting in the film is the blend of retro modelling techniques and digital effects. This strikes just the right blend; 40 years on from the excitement of Apollo, this is space with a used look, with a cynical air. 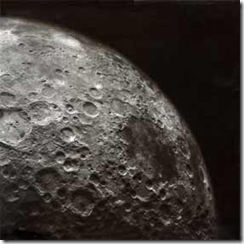 When watching the film I was constantly reminded of an exhibition in 1999 with my sons called 'Full Moon: Apollo Mission Photographs of the Lunar Landscape'', put together by the aptly named Michael Light. We had just been to see the first of the new Star Wars trilogy, which was a huge disappointment, and then there we were in the Hayward Gallery getting excited over a photo exhibition.

Most stunning were the rooms containing huge panoramic photos, which are still the best sense of the lunar landscape I have ever experienced. The moon is a black and white world, and in this landscape, there is a tiny bit of colour - the astronaut and his craft.

Light had spent four years delving into the NASA archive of 30,000 images from the Apollo moon flights. He digitally scanned originals to film-grain resolution and created the panoramas by combining individual Hasseblad medium-format images. 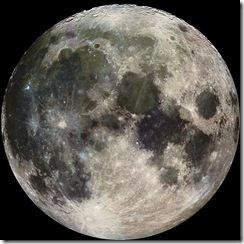 writes: 'Before the Apollo astronauts landed on the moon, the lunar surface had been pristine for over four billion years, still and silent, marked only by the impact of countless meteorites and blown only by the solar wind. Yet several of the astronauts have talked about how, at times, the moonscapes seem strangely familiar...This is the 'patient moon' of timeless proportions, of sweeping relief and smooth hills.'

Jones acknowledges the book's impact on the visual look of' 'Moon'. The idea of creating a shake-and-bake Helium-3 mining facility on the moon to extract fuel for fusion-powered generators on the earth came from 'Entering Space' by the astronautical engineer Robert Zubrin.

In the film's press notes, Jones says the film is about 'the paranoia that strikes you when you are in a long distance relationship; and it’s about learning to accept yourself.  A lot to take on for a little indie film, but maybe that was the best place to try.'