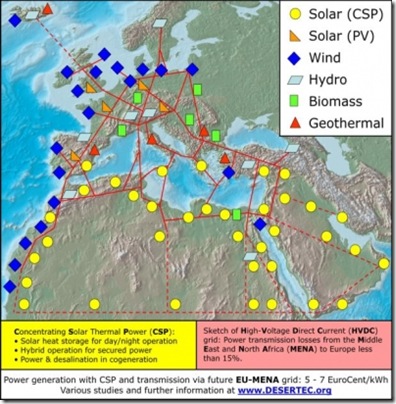 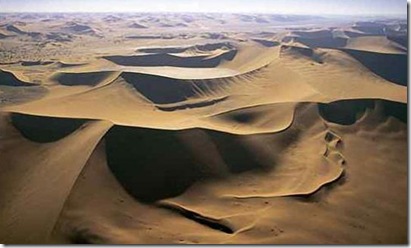 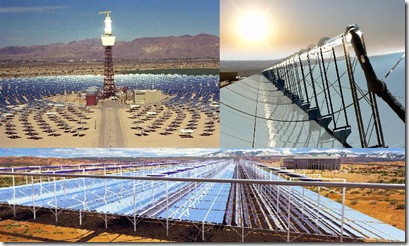 Things are getting futuristic. Today was the official launch in Munich of the Desertec Industrial Intiative (DII):

The estimated cost of the project, according to William Ickes of AFP is estimated at 400 billion Euros (560 billion Dollars) and is scheduled for completion in 2050. 'The massive project would cover 6,000 square kilometres (2,300 square miles), including 2,500 for power plants and 3,500 for the distribution grid.' He reports that the project has 'won support from firms in Algeria and Spain and from officials in Egypt and Jordan.'

'A study by Desertec, Greenpeace and the Wuppertal environmental research institute said the project could create two million jobs. Desertec spokesman Tim Hufermann said 80 percent of the electricity would power producer countries.  The remainder should satisfy 15 percent of Europe's needs, he added.'

According to Energy Current: 'The initiative will analyze and develop the technical, economic, political, social and ecological framework for carbon-free power generation in the deserts of North Africa.

'The Desertec concept, developed by think tank the Club of Rome, envisions a sustainable power supply for all regions of the world with access to the energy potential of deserts. It aims to provide 15 percent of Europe's energy needs, along with part of the energy demand in North Africa and the Middle East by 2050, by developing renewable energy projects in the desert regions of North Africa and the Middle East.'

According to The Economist: 'The Start of Something Big'

'The power stations in question will be “solar thermal”,  rather than the better known sort relying on photovoltaic solar cells. In other words, instead of converting the sun’s rays directly into electricity using expensive semiconductor-grade silicon, they will use cheap metal mirrors to focus those rays either onto boilers that make steam to drive turbines, or onto containers of special low-melting-point salts that will store heat overnight, so that it is available to drive turbines during the hours of darkness.'