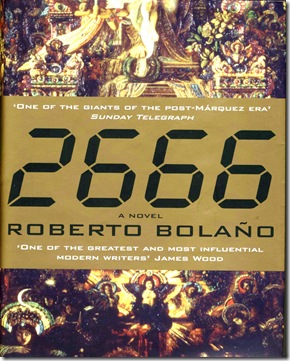 "What is sought and achieved here is the Total Novel, placing the author of 2666 on the same team as Cervantes, Sterne, Melville, Proust, Musil, and Pynchon." - Rodrigo Fresa

This is my second post about Roberto Bolaño , having finished his mighty and extensive saga '2666' which is a true literary experience.

Composed of five parts which Bolaño intended to be published in five separate volumes, his wishes were overridden by his executors after his death in 2003 at the age of 50, and was produced in this giant 900pp form, first in Spain in 2004 and then, in translation, in the US in 2008 and the UK in 2009.

The book's central focus is the pseudonymous Mexican border town of Santa Teresa (based on  the real town of Cuidad Juarez) and the mysterious and ongoing real-life series of brutal murders of women that continue to this day. More than 400 women have been killed or 'disappeared' since 1993.

The book's five sections are as follows:

1) 'The Part about The Critics', in which four literary critics join forces to try and discover the mysteries and whereabouts of a famous German writer named  Benno von Archimboldi, which leads them on a twisting trail to Mexico.

2) 'The Part About Amalfitano' takes us deeper into the lives of the people of Santa Teresa through the experiences of a philosophy professor who is having a mental breakdown.

3) 'The Part About Fate' concerns a black American literary journalist named Oscar Fate who is, by chance, assigned to cover a boxing match in Santa Teresa and ends up getting drawn into the mystery of the killings.

3 'The Part About The Crimes' is the largest section which documents in extensive detail the many murders and the attempts made by various detectives and policemen to discover who is responsible.

4) 'The Part About Archimboldi'  tells the author's  lifestory in Europe during world War II and beyond, and links us back to the book's beginning.

As in his earlier novel 'The Savage Detectives' (see Previous Post: ROBERTO BOLAÑO), which I would heartily recommend reading first, the narrative structure is unorthodox, containing a cast of hundreds of characters whose interlocking stories constantly overlap and intersect in unexpected ways.

Bolaño's unique writing style blends the magical and the realistic, the humorous and the grotesque. He spares us nothing of the gruesome details of the murders and delights in talking graphically about sexual matters. Death hangs over the whole book and this is definitely not a work for the squeamish. Bolano was dying while he wrote it and the smell of the grave lies heavily upon it.

It is rightly considered one of the great works of literature of the 21st century, which also serves the purpose of drawing world attention to the mass murder of the Mexican women. It is a remarkable feat of imagination which envelops you in its grasp and will permeate your thoughts and dreams. Its countless stories within stories take us to the depths of humanity and the heights of poetry. Its a true wonder.

There is a great deal about Bolaño and this book on the net, from which I have selected the following links: