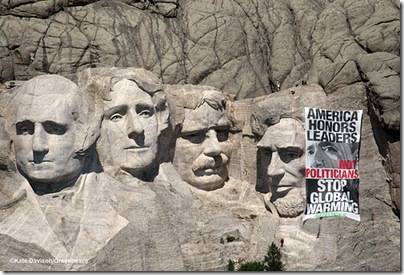 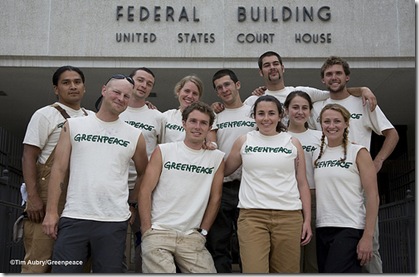 On July 8th, this crew of Greenpeace activists climbed Mt Rushmore and unfurled their banner calling for the G8 to act on climate change. See full report, videos, photos on Greenpeace USA site.

Were you aware the biggest environmental movement in the US at present is the campaign against the coal industry and the financial institutions that bankroll them? This is certainly a story that is under-reported in the UK and maybe in your country too. Here, in a brief summary form, is some of what is going on.

This week the Sierra Club, a leading US conservation group, made an astonishing announcement: that since they started their 'Beyond Coal Campaign' six years ago, they and their allies have defeated plans to build 100 new coal-fired power stations in the US - the 100th being the coal plant proposed by Intermountain Power in Delta, Utah.

The coal rush began in 2001 when plans were set in train to build 150 new coal-fired plants in the US. The extraordinary effectiveness of the campaigners have had a devastating impact on these plans.

According to a piece by Ruedigar Matthes on Planetsave: 'The Sierra Club doesn’t just want to stop the coal kingdom from expanding, but wants to ignite a renewable energy revolution, helping states fill the void left by abandoned or prevented coal plants. In place of coal, the Sierra Club is pushing for the development of wind, solar and geothermal plants as well as promoting energy efficiency.' 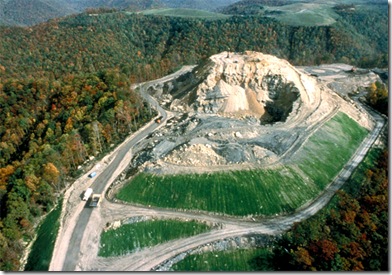 Another important focus for the anti-coal movement is Mountaintop Removal Coal Mining which is devastating the natural environment of Appalachia. According to Mountain Action:

'Mining companies literally explode the tops off of mountains with ammonium nitrate oil fuel to expose seams of coal, which they then scrape out with giant machines. While the environmental devastation caused by this practice is obvious, families and communities near these mining sites are forced to contend with continual blasting from mining operations that can take place up to 300 feet from their homes and operate 24 hours a day. Families and communities near mining sites also suffer from airborne dust and debris, floods that have left hundreds dead and thousands homeless, and contamination of their drinking water supplies. Furthermore, mountaintop removal is a mining technique designed, from the very start, to take the labor force out of the mining operation. Once a power base for the U.S. labor movement, unions in Appalachia have been devastated by the transition from deep ground mining to surface mining techniques like mountaintop removal. According to the Bureau of Labor statistics, in the early 1950’s there were between 125,000 and 145,000 miners employed in West Virginia; in 2004 there were just over 16,000. During that time, coal production has increased! 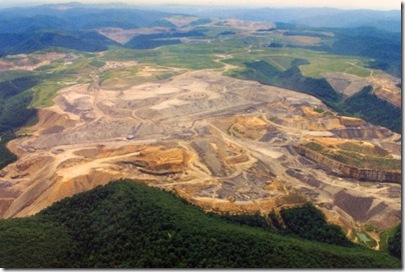 In a passionate article published in the Washington Post (July 3rd), entitled 'A President Breaks Hearts in Appalachia', Robert F. Kennedy Jr calls upon Obama to stop what he calls an 'Appalachian apocalypse.' With good reason.

According to RFK Jr, who works as a senior attorney for the Natural Resources Defense Council: 'Mining syndicates are detonating 2,500 tons of explosives each day -- the equivalent of a Hiroshima bomb weekly -- to blow up Appalachia's mountains and extract sub-surface coal seams. They have demolished 500 mountains -- encompassing about a million acres -- buried hundreds of valley streams under tons of rubble, poisoned and uprooted countless communities, and caused widespread contamination to the region's air and water.'

One month ago:17 Arrests In Mountain Top Removal actions

UPDATE: The Guardian picks up the story:

'Like other opponents of mountaintop removal, Gibson had been counting on Obama, with his election promises of a clean energy economy, to shift the power balance away from coal.

But those hopes evaporated in May when the EPA signed 42 permits for mountaintop removal while turning down only six — a higher ratio even than during the latter part of the George Bush presidency. Some 170 more permits are pending, according to the Sierra Club.

In June, the White House announced it would strengthen oversight of mining operations, but it refused to endorse a ban on the dumping of debris into mountain streams.

That stand has infuriated Obama's natural allies. Gibson sees it as pure betrayal. "I think Obama's going to fall into line like the last president we had," he said. "He has developed into a coccoon that is going to end up not being a butterfly but a corporate president."

Email ThisBlogThis!Share to TwitterShare to FacebookShare to Pinterest
Labels: '