2011 INTERNATIONAL YEAR OF THE FORESTS 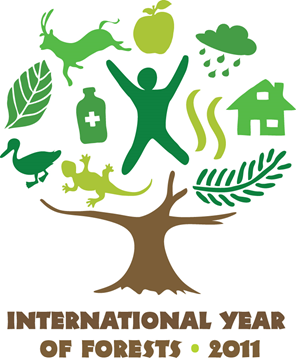 The United Nations General Assembly has declared by resolution that 2011 is the International Year of the Forests to raise awareness about sustainable forest management and conservation. On a global scale, our forests are in trouble.  The United Nations estimates that more than 50,000 square miles of the world's forests are lost each year from deforestation due to agriculture, unsustainable timber harvesting, unsound land management practices, and the expansion of human settlements into forested areas.

Forests play an integral part in the livelihoods of 1.6 billion people worldwide, supply the habitat for millions of species, and play a critical role in mitigating the effects of climate change.

Among the planned events for 2011 International Year of Forests are tree plantings and the distribution of seedlings. Ethiopia, Georgia, Jamaica, Lebanon and Poland, and some non-governmental organizations all have plans to organize mass tree plantings as part of their International Year activities. The Democratic People’s Republic of Korea has specifically indicated plans to plant over 1 billion trees throughout the country during 2011.

The Plant for the Planet: Billion Tree Campaign is a worldwide tree planting initiative facilitated by the United Nations Environment Programme.