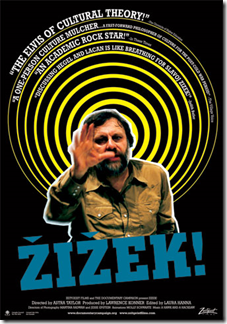 (Left): Film poster for ‘Žižek’, a film by Canadian documentary filmmaker Sophie Fiennes, who says of him: "He is very much a thinker for our turbulent, high speed, information-led lives," says Sophie Fiennes, "precisely because he insists on the freedom to stop and think hard about who you are as an individual in this fragmented society. We need a radical hip priest and Slavoj is that in many ways."

These current times are reminding The  Generalist of the late 1960s/early 1970s, not least because of the surge in novel philosophic/ political/economic theories that are being bandied around.  New thinking is on the march.

One of the most vibrant and stimulating of these new thinkers is Slavoj Žižek, a Slovenian firecracker whose mash-up of Marxism and Lacanian psychoanalysis makes interesting reading, listening and reading. Prolific (some 50 books), perverse, playful and populist, Žižek riffs on a bewildering mix of topics that provide a stream of original thoughts and quotable soundbites.

Here is his take on Wikileaks, from a recent article in the London Review of Books  entitled ‘Good Manners in the Age of Wikileaks’

‘…we face the shameless cynicism of a global order whose agents only imagine that they believe in their ideas of democracy, human rights and so on. Through actions like the WikiLeaks disclosures, the shame – our shame for tolerating such power over us – is made more shameful by being publicised. When the US intervenes in Iraq to bring secular democracy, and the result is the strengthening of religious fundamentalism and a much stronger Iran, this is not the tragic mistake of a sincere agent, but the case of a cynical trickster being beaten at his own game.’

His recent book Living in End Times espouses the view that the global capitalist system is approaching an apocalyptic zero-point.

“Its four riders,” he writes, “are comprised of the ecological crisis, the consequences of the biogenetic revolution, imbalances within the system itself (problems with intellectual property; forth-coming struggles over raw materials, food and water), and the explosive growth of social divisions and exclusions.”

Those wishing to explore further have a wealth of material on the Internet to choose from. 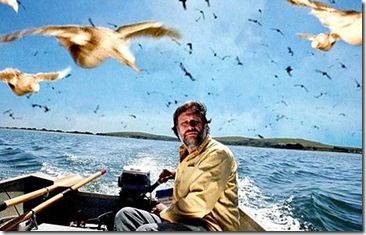 ‘Slavoj Zizek: the world’s hippest philosopher’ by Helen Brown [The Telegraph]Interview by Sean O’Hagan [The Observer] 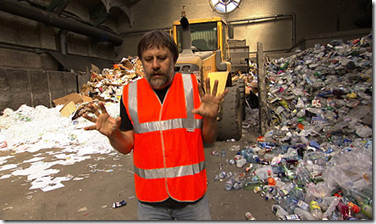 See also: A whole raft of videos on You Tube

‘My unconditional insight is that we will be pushed into a situation where we will have to make a choice: either we do something or we are slowly approaching a society I'm not  sure I’d like to live in.”

[Thanks to Kean for turning me on to this]