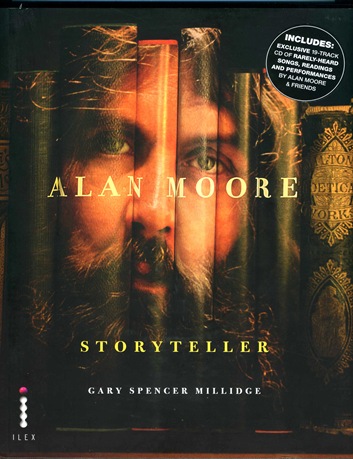 As chance would have it, having completed posts on  New Worlds and Jim Cawthorn, both of which involved Michael Moorcock, I received this review copy of ‘Alan Moore: Storyteller’ with a intro by Mike M which, in part, has this to say.

‘The history of comics dates from BAM to SAM – from Before Alan Moore to Since Alan Moore – because quite simply no one had the ambition, the imagination, and the talent to do what he did…..In the hands of Alan Moore [the “graphic novel”] becomes an enduring monument, capable of constant interpretation and re-examination. That is why we admire him, respect him and celebrate him, an authentic genius for the twenty first century.’

This a superb book which I have just devoured over the weekend and will constantly refer to. Its author Gary Spencer Millidge has done an incredible job in documenting the extraordinary story of Alan Moore’s achievements to date. This handsome edition, fully illustrated throughout, is beautifully designed and presented and stands as the definitive work to date on Moore’s life and times.

Moore is a remarkable fellow whose output is colossal, whose imagination is boundless, whose honesty and down-to-earthness is exemplary. The scale of his achievements is humungous.

For anyone interested in comics, particularly young people keen to work in the medium, this is the Bible. It shows Moore’s working methods and explains how he worked with his collaborators – a real education, direct from the maestro.

Having reinvented comics and graphic novels – expanded their possibilities and created several masterpieces – Moore has in recent years followed a hectic schedule of live musical/theatrical appearances. The book comes complete with a 19-track CD which samples his prodigious output in these fields too. Strange and wonderful.

Meticulously researched, clearly written, with a wealth of rare and wonderful graphics, this is a book to treasure. It will inspire and excite your imagination.