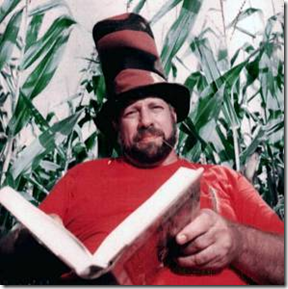 Michael S. Hart, the founder of e-books and Project Gutenberg
died some eight weeks ago.What a remarkable and inspiring man.
This obituary is granted to the public domain by its
author, Dr. Gregory B. Newby.

Michael Stern Hart was born in Tacoma, Washington on March 8, 1947. He died on September 6, 2011 in his home in Urbana, Illinois, at the age of 64. His is survived by his mother, Alice, and brother, Bennett. Michael was an Eagle Scout (Urbana Troop 6 and Explorer Post 12), and served in the Army in Korea during the Vietnam era.

Hart was best known for his 1971 invention of electronic books, or eBooks. He founded Project Gutenberg, which is recognized as one of the earliest and longest-lasting online literary projects. He often told this story of how he had the idea for eBooks. He had been granted access to significant computing power at the University of Illinois at Urbana-Champaign. On July 4 1971, after being inspired by a free printed copy of the U.S. Declaration of Independence, he decided to type the text into a computer, and to transmit it to other users on the computer network.

From this beginning, the digitization and distribution of literature was to be Hart's life's work, spanning over 40 years. Hart was an ardent technologist and futurist. A lifetime tinkerer, he acquired hands-on expertise with the technologies of the day: radio, hi-fi stereo, video equipment, and of course computers. He constantly looked into the future, to anticipate technological advances. One of his favorite speculations was that someday, everyone would be able to have their own copy of the Project Gutenberg collection or whatever subset desired. This vision came true, thanks to the advent of large inexpensive computer disk drives, and to the ubiquity of portable mobile devices, such as cell phones.

Hart also predicted the enhancement of automatic translation, which would provide all of the world's literature in over a hundred languages. While this goal has not yet been reached, by the time of his death Project Gutenberg hosted eBooks in 60 different languages, and was frequently highlighted as one of the best Internet-based resources.

A lifetime intellectual, Hart was inspired by his parents, both professors at the University of Illinois, to seek truth and to question authority. One of his favorite recent quotes, credited to George Bernard Shaw, is characteristic of his approach to life:

Michael prided himself on being unreasonable, and only in the later years of life did he mellow sufficiently to occasionally refrain from debate. Yet, his passion for life, and all the things in it, never abated.

Frugal to a fault, Michael glided through life with many possessions and friends, but very few expenses. He used home remedies rather than seeing doctors. He fixed his own house and car. He built many computers, stereos, and other gear, often from discarded components. Michael S. Hart left a major mark on the world. The invention of eBooks was not simply a technological innovation or precursor to the modern information environment. A more correct understanding is that eBooks are an efficient and effective way of unlimited free distribution of literature. Access to eBooks can thus provide opportunity for increased literacy. Literacy, and the ideas contained in literature, creates opportunity.

In July 2011, Michael wrote these words, which summarize his goals and his lasting legacy: “One thing about eBooks that most people haven't thought much is that eBooks are the very first thing that we're all able to have as much as we want other than air. Think about that for a moment and you realize we are in the right job." He had this advice for those seeking to make literature available to all people, especially children:

Michael is remembered as a dear friend, who sacrificed personal luxury to fight for literacy, and for preservation of public domain rights and resources, towards the greater good.

According to the Project Gutenberg Wikipedia entry, as of June 2011, they had 36,000 items in their collection with 50 new e-books being added every week. mostly in English but increasingly a wide variety of other languages including Finnish and Chinese.

There is a useful summary of the history of the e-book phenomenon on Wikipedia here.
at 3:12 pm