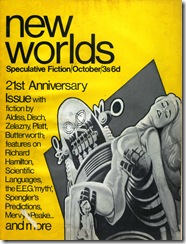 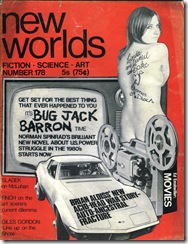 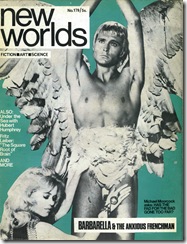 Just unearthed from the basement of THE GENERALIST ARCHIVE: some rare copies of the legendary science-fiction/speculative fiction magazine ‘New Worlds.’ Had no idea, until reading the lengthy history of the magazine in Wikipedia, that the mag was first published in 1946.

I always knew it during the period when it was edited by Michael Moorcock. We were working on Frendz magazine at the time (1971/1972). Mike was a regular visitor to our office and we would often go round Mike’s house where I remember a manic Robert Calvert and the shy presence of Keith Roberts, author of the wonderful novel ‘Pavane’. 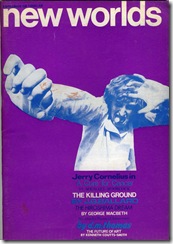 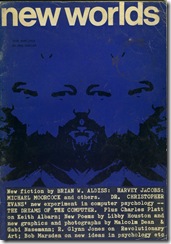 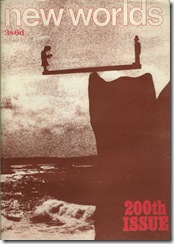 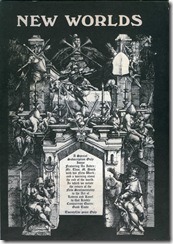 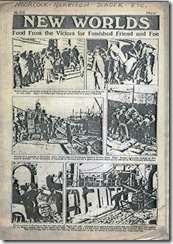 These are probably the rarest issues: Left: A Special Subscription Only issue (201) published in March 1971. Right: The magazine was revived by Mike Moorcock as a fanzine between Spring 1978 and Sept 1979. They were numbered 212 to 216. Issue 212 (pictured here) took the form of a spoof newspaper and was distributed free.  [See: New Worlds history on sfcovers.net]

NEW WORLDS IS BEING REPUBLISHED NEXT MONTH IN BOTH ELECTRONIC AND PRINT FORM. http://www.newworlds.co.uk/

The Directors of the Daves Dream Company - Dick Jude, David Hodson, David Tamlyn, Roger Gray and Felix Jude- West - have reached an agreement with Michael Moorcock to revive the seminal science fiction magazine New Worlds. Michael has kindly agreed to lend his name to the masthead of the magazine and to contribute editorial pieces. The magazine will appear in both electronic and traditional print on paper formats and be backed up by an extensive website that will feature exclusive editorial features free to all interested readers.