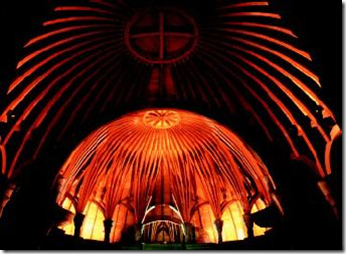 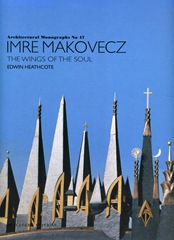 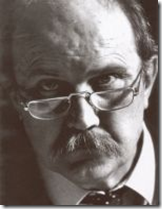 This post is a tribute to the Hungarian organic architect Imre Makovecz, a man of true vision, who recently passed away. I owe most of what I know of him to Edwin Heathcote, whose monograph ‘Imre Makovecz:The Wings of the Soul’ [Academy Editions. 1997] is I believe the only detailed source in English. Beautifully illustrated as well. Makovecz’s work is inspiring. When I was editing Tree News magazine, I commissioned this piece from Edwin which he has kindly agreed to let me republish here. Makovecz was obsessed by trees and his buildings were built entirely of timber. 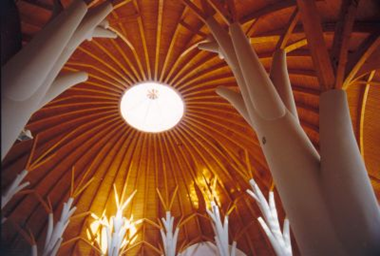 ARCHITECTURE AND THE TREE OF LIFE
When the authorities of communist Hungary banished the architect Imre Makovecz (b. 1935) to the forest in the late 1970s, they thought that would be the end of him. They were wrong.
Makovecz had been a persistent thorn in the side of the Communist regime, unwilling to build standardised structures for mass production and openly critical of the corruption and repression of the regime. He was becoming a magnet for dissenting students.
The response of the authorities was to bar him from work­ing in the state offices, normally professional death for an archi­tect in a country where the construction industry was nation­alised.
Makovecz however had contacts in the forestry depart­ment and he went to work in the extensive woods of the Danube bend where, to all intents and purposes, the authorities were happy for him to do what he liked, in the hope that he could have no real impact out there in the wilderness. What hap­pened, however, was that Makovecz began working among and with the trees, and created a distinctive architecture ouevre that has exerted a profound effect on architects and artists around the world. 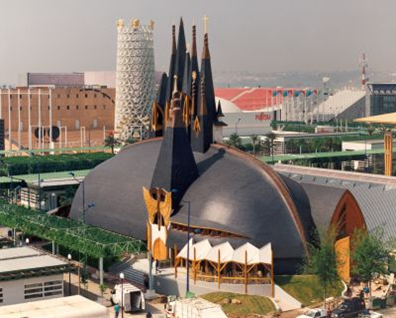 After the fall of the communist regime, Makovecz was given freer reign to build and, in a series of community buildings, houses and sacred spaces, he honed an architecture which incorporated archetypal symbols, folk and organic motifs and the earth, all using the natural form of trees as part of their tec­tonic language.
Real international recognition, however, only came with a building that was entirely based around a tree that stood at its heart.
The Hungarian pavilion at the Seville Expo in 1992 became, against all odds, the most popular pavilion on the site. A swelling, hump-backed roof crowned with a row of spires, the building formed an antidote to the bland hi-tech of the pavilions that surrounded it. 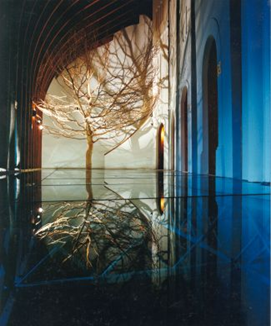 Source: www.skyscrapercity.com/showthread.php?t=216250
The Hungarian building centred round a single tree in a dramatic space defined by timber vaulting and sitting within a glass floor.
Describing the symbolism of the tree, Makovecz said:
"The most important thing is that the tree grows simulta­neously upwards and downwards, towards the light and towards the dark. Darkness belongs as much to its essence as light. Nevertheless, we always talk only about what is visible - leaves, chlorophyll, the circulation of water in the tree- we never talk about the roots with the same emphasis.
"Of course we have learned that the roots dissolve salts and the tree uses them to build itself up, but no-one ever talks about the fact that the tree's connection with darkness is just as weighty, just as meaningful, as its connection with the light.
"I thought that this strange creature, which grows upwards and downwards at the same time, must be known in its entirety. If people comprehend the view of below with as much power as they do of the above, they will perceive a new world."
In the image of the tree, its roots exposed, Makovecz found the perfect symbol for his own essen­tially Manicheistic world view. He told me that: "What I try to do in my architecture is to create a con­nection between the earth and the sky."
From the Vikings to the Native Americans, dozens of cultures have perceived the cosmos as a tree. Its trunk ascending from the axis mundi and bearing the weight of the heavens in its branches, while the tangle of roots below the ground are analogous to the serpents which still represent darkness and fear of the unknown (think only of the tree in the Garden of Eden, with evil represented by the serpent).
From the Maypole to the pagoda, the Jewish Menora to the Vikings' Yggdrasil, the image of the tree as world structure seems to transcend geographical boundaries. Yet as Makovecz is keen to point out, it is also the most local of images.
To transplant a tree from the Hungarian plains to the arid site of Seville Expo is a gesture demonstrating the futility of attempting to show Hungarian culture in the neutered sur­roundings of a glorified trade fair. As well as being a heroic image, the tree stripped naked presents us with a picture of alienation, of dryness and, ultimately, of death.
TREE TECTONICS
In his Hungarian buildings, however, trees and the rough-hewn timber they provide seem to appear as sentient beings, hold­ing broad sheltering roots in their powerful grip. 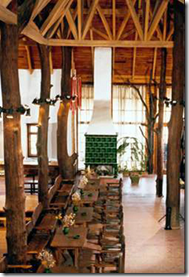 Source: www.1hungary.com/info/zalaszentlaszlo/
In the community centre for Zalaszentlaszlo (1976-84), a building constructed by the villagers themselves, Makovecz planned a courtyard surrounded by columns hewn from trees, the stubs of their branches left intact. The aim was to use this courtyard as a public square for community activities organ­ised by the villagers rather than imposed on them from above by the communist authorities.
The architect refers to Macbeth in which the witches fore­cast that Macbeth will not be defeated until Birnam wood comes to his stronghold at Dunsinane. Makovecz saw his trees as similar beings coming to haunt the communist author­ities. 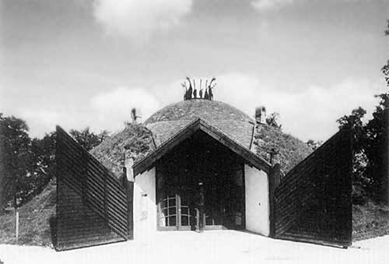 Source: www.zenth.dk/research/makovecz/visegradfr/visegradfr.htm
His period of exile in the woods of Visegrad bore fruit in a number of educational buildings and small structures for campers. Among the most impressive was the Forest Education Centre, a domed structure sitting partly beneath the ground, the earth piled up against its sides.
Its dome is supported on twelve columns, the by now famil­iar stripped, yet recognisable trees. Signs of the zodiac crown each column as a further reminder of the metaphor of the celes­tial vault atop these trees of life. 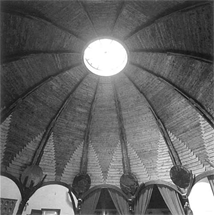 An oculus (a glazed round opening at the centre of the roof), a literal 'eye to the sky', provides the link between the earth and the heavens.
Other buildings were influenced by the yurt, the round tent of the nomadic peoples of Central Asia from whence the Hungarian people originated. These lightweight structures share an oculus that not only provides light but refers to the shamanic roots of the people - it was through this hole that the spirit of the shaman would fly, his spirit mingled with the smoke from the fire, into the realms of the sky. 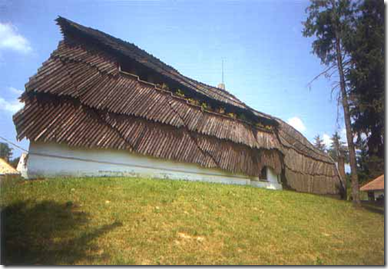 Bak Community Centre 1985-88 www.zenth.dk/research/makovecz/Bak/bakB.htm
Other buildings are based on zoomorphic forms, such as the ski-hut at Dobogoko, which resembles a shaggy buffalo, and the later cultural centre at Bak, based on the spread wings of an eagle. In all cases Makovecz uses the skills of local crafts­men to evoke the surfaces - from hairy bison to the feathers of a bird - with coarse timber shingles hewn from local trees.

Siofok Lutheran Church 1986-90    www.makovecz.hu/
Two churches built by Makovecz in Siofok and Paks during the late 1980s, demonstrate the full expressiveness of the archi­tect's animal imagery. The church at Siofok uses a literal inter­pretation of the notion of the facade, its entrance being through the mouth of a warrior's mask.

Paks Catholic Church 1987-90 Source: www.zenth.dk/research/makovecz/paks/paks.htm
The church at Paks church blends Celtic patterns in plan with swelling, fecund forms and piercing spires coated in scale-like, hand-cut slates.
In both buildings, as in the dozens of houses Makovecz has designed, the rough-hewn trunks of trees play a pivotal role as columns, gateposts and totems, their role both structural and symbolic.
Just as Daphne turned into a tree to escape the advances of Apollo, these trees have been sacrificed to provide shelter aad the buildings wear their timber as Apollo wore his crown of laurels in tribute to this lost love.
Jacob Grimm, the collector of fairy tales and etymologist, suggested from his research that our first temples were glades and clearings in the forest where the spirits of nature were said to dwell. Makovecz has created an ouevre in which the architecture echoes these archaic temples and reminds us of something that we know instinctively: that trees stand, like us, upright in the landscape and provide a glimpse of the lost knowledge of a link between the realms of the earth and the darkness and the light. 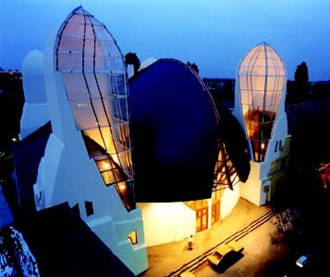 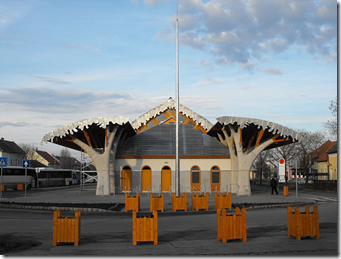 SEE MORE OF HIS BUILDINGS AT THIS OFFICIAL SITE www.makovecz.hu/
ALSO ON FLICKER  www.flickr.com/groups/imremakovecz/