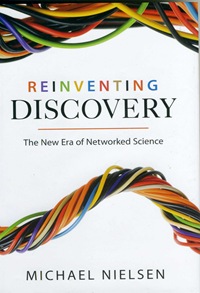 Following on my from PREVIOUS POST: The Information Revolution

‘I believe that the progress of science – how discoveries are made – will change more in the next twenty years than it has in the past 300 years.’

Michael Nielsen, an Australian physicist turned writer, now living in Canada, is a man with a mission. He believes that the future of scientific discovery lies in open data and collaborative networked science using online tools. He is a member of the Working Group on Open Data in Science at the Open Knowledge Foundation

His book begins with an account of the 2009 Polymath Project, when mathematician Tim Gowers decided to conduct an experiment on his blog. He selected a difficult unsolved mathematical problem and announced he was going to try and solve it in an open manner, posting up his own work and inviting comments and contributions from others. Slow to start, the comments erupted and over the next 37 days, 27 people had written 800 responses containing more than 170,000 words. In the process, they not only solved the original problem but also a harder problem that included the original as a special case.

This example of scientists working together to create knowledge is just one aspect of a broader picture. A second aspect is collective databases. Nielsen writes:

‘Scientists in many fields are collaborating online to create enormous databases that map out the structure of the universe, the world’s climate, the world’s oceans, human languages, and even all the species of life… We are collectively mapping out the entire world. With these integrated maps anyone can use computer algorithms to discover connections that were never before suspected…We are, piece by piece, assembling all the world’s knowledge into a single giant edifice.’

A third aspect is a big shift in the relationship between science and society. Nielsen uses the example of a website Galaxy Zoo which recruited more  than 200,000 online volunteers to help astronomers classify galaxy images.

Networked Science is replete with many working examples of all three aspects but Nielsen confesses that ‘one thing that pained me while writing this book is that narrative constraints meant that I’ve had to omit nearly all the thousands of open science projects now going on.’

Nielsen is a clear and readable writer and his book does a very good job of scouting a very broad field. His list of sources and further reading is extensive and invaluable. A great starting point for exploring the new future we’re rushing into.

Nielsen recommends the following sites for keeping track of what’s going on in open science today:

Science In The Open: The Online home of Cameron Neylon.