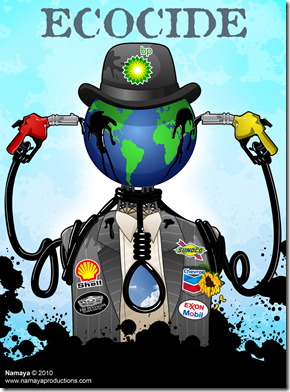 This is an important and timely campaign that deserves your support:

Proposal for Ecocide to be
the 5th International Crime Against Peace

Polly Higgins submitted to the United Nations in April 2010 the written proposal for Ecocide to be made the 5th Crime Against Peace, alongside Genocide. She set out a legal definition of the word ecocide and has created a provision that will impose a legal duty of care on all companies to place environmental considerations first.

A recent report for the United Nations has found that 3,000 of the world’s biggest corporations caused $2.2 trillion of ecocide in 2008.  Image: Greenpeace, Alberta Tar Sands, Canada

The Crime of Ecocide

Ecocide can arise out of human intervention: Heavy extraction, toxic dumping, mining and deforestation are all examples of mass ecocide.

The Law of Ecocide will stop damaging and destructive activity. Voluntary corporate governance, market trading and offset mechanisms have failed. By creating a Law of Ecocide we will create specific legally binding duties and responsibilities.

Ecocide is a crime of consequence. e.g where an energy company procures its energy by extracting fossil fuel, as opposed to creation from renewable energy, that would result in ecocide.

Ecocide is not a crime of intent. CEO’s do not sit in their offices plotting to destroy the Earth. It is a consequence of the pursuit of profit which arises out of destructive activity.

Ecocide creates a pre-emptive obligation. It stops the damage before it happens. A duty of reasonable care is put in place, ensuring that individual and collective (corporate, governmental and armies) responsibility is taken by those who have contractual rights over a given territory before damage or destruction of a given territory takes place.

Ecocide is preventative. It is a crime focused on preventing harm, rather than focusing on blame.  This means that standards of conduct and care will be punishable in criminal court of law if and when breached.

Ecocide is a tool to enforce restorative justice. Instead of paying fines, restoration becomes the name of the game.  Extensive restoration by those who have committed Ecocide will ensure that appropriate remedy is put in place, not merely the payment of a fine which is all too easily factored in as an external cost by those evading their responsibilities.

Ecocide creates responsibilities at international and national level. Primary responsibility to prevent, investigate and punish the crime of Ecocide sits first and foremost with the country where the activity takes place. Where a crime of Ecocide has taken place on a given territory, and that country is unwilling or unable to take action, then the crime will come under the jurisdiction of the International Criminal Court.  By implementing Ecocide as a crime at international level, the pressure is immediately created for the crime to be speedily implemented at national level. It’s a very effective top-down approach.

Ecocide sends a powerful global message to the world, not just to those involved in business or during war, to take responsibility for the well being of all life.

Ecocide is a Crime Against Peace.