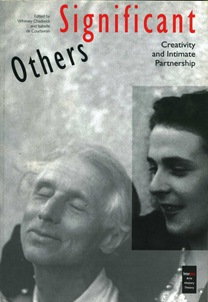 THE GENERALIST is a lot to do with chance, coincidence and making connections which is why this post begins, on this bright crisp Sunday morning in February, with a book I suddenly remembered and fished out of my library.

‘Significant Others: Creativity and Intimate Partnership’ is a multi-author collection of 13 profiles, edited by Whitney Chadwick and Isabelle de Courtivron [Thames & Hudson. 1993] that examine artist and writer couples – partnerships in which both are active in the same field -who have shared both sexual and artistic bonds. The editors asked to the contributors to address the following question:

‘If the dominant belief about art and literature is that they are produced by solitary individuals, but the dominant social structures are concerned with familial, matrimonial, and heterosexual arrangements, how do two creative people escape or not the constraints of this framework and construct an alternative story.’ 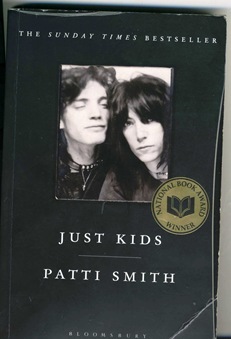 Which leads me to this well-thumbed copy of ‘Just Kids’ by Patti Smith, a loving memoir of her relationship with Robert Mapplethorpe, left in my care, by chance, by Baba on her way to Hindustan. Blessings.

This is a moving and poetic tale of how two street-ado0lescents found each other in New York, bonded and survived, and lived to become significant artists in their differing fields – photography and music/poetry. Both shared a love of drawing and dressing up. They lived in bedrock sleasehouses and abandoned basements, surviving on crackers and air, transforming their surroundings with juju objects found in their constant trawls through dime stores and skips. They moved to the Chelsea Hotel before fame and fortune found them. They hung-out in CBGB’s and Max’s Kansas City with a long roll-call of famous faces. Patti travelled to Paris; Mapplethorpe explored the S&M underground scene. Mapplethorpe died of AIDS on March 9th, 1989; Patti Smith continues to perform and produce. Both continue to inspire.

Here’s my one Mapplethorpe story. I was in the foyer of a show of his photos at the ICA in London in the 1980s, standing in the foyer staring at a very large black and white self-portrait of the photographer. God he looks cool I thought. Things were not going so well for me at that time. I was jealous I guess, frustrated in the face of this hip icon. The rest of the photos were arranged in a series of three short narrow corridors leading of a main aisle, each one with framed photos on either side. The first were the more innocent shots leading gradually to Corridor 3 where the elegant hard-core portraits challenged both the sensibilities and the stomach. Returning from this journey back to the foyer, there was now a figure standing in front of the self-portrait. It was Robert Mapplethorpe – looking white and tiny and weary in front of his iconic self. That shocked me and its an incident I often think about. Draw your own conclusions.

Patti Smith’s book is suffused with the spirit of Rimbaud so it was somehow no surprise to me when, whilst reading the above, I made the chance discovery 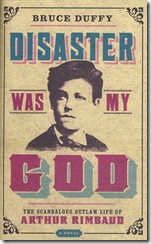 of ‘Disaster was My God: The Scandalous Outlaw Life of Arthur Rimbaud’ by Bruce Duffy on one of those little tables you find outside second-hand bookshops.

First published last year by Clerkenwell Press in London, this is an imaginative novelisation of Rimbaud’s life, studded with his poetry. It’s a triumph.

WOW! This book grabbed me by the neck and took me on a helter-skelter ride. Duffy seems to have mesmerically internalised Rimbaud’s spirit (if that makes sense), bringing him to life in extreme vividness. His prose has both raw energy and microscopic preciseness.  We’re both inside the poet’s mind and feelings and outside him, observing the shattering affect he has on those around him – including of course Paul Verlaine, his significant Other. –  with whom Rimbaud has an intense, bizarre, extreme relationship. Duffy calls that section of his book ‘Monsters Together’.

Through this book I now understand why Rimbaud is so powerful, so original, so important, so influential:

‘The boy…was that rarity of rarities and oddest of oddities – a prodigy of letters.

‘And by sixteen – and then writing his own poems – Arthur Rimbaud was not merely dazzling or surprising…Arthur Rimbaud had anticipated and exceeded Dada and Surrealism, had checkmated and rewritten sixty years of future poetry, had barged headlong into the twentieth century….with recklessness and bravado.’

The last words belong to Rimbaud, from a letter he wrote in 1870 when he was 16:

‘When the endless servitude of woman is broken, when she lives for and by herself, man – heretofore abominable – having given her her release, she too will be a poet! Woman will find some of the unknown! Will her world of ideas differ from ours? – She will find strange, unfathomable, repulsive, delicious things; we will take them, we will understand them.’

Here’s to significant others!