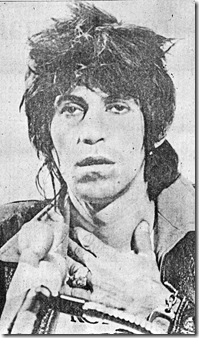 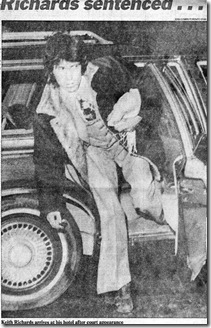 1978: Two pictures of Keef after sentencing  in a Toronto court for possession of 22 grams of heroin, following a bust in Feb 1977 that looks set to put paid to the Stones. He escaped with a year’s probation and order to give a special concert for the blind in Toronto. Pics from the Toronto Star. I wrote a major piece for the NME about the bust which you can read here: NME: The Stone with the Golden Arm. 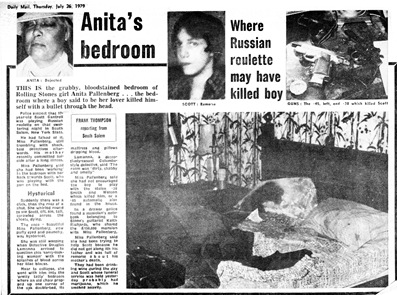 1979, June: 17-year old Scott Cantrell shot himself in the head in the master bedroom of Keith Richard’s house in Lewisboro, New York, after sharing a bed with Anita Pallenberg. Some saw eerie parallels with Performance.

According to Wikipedia: ‘The youth had been employed as a part-time groundskeeper at the estate and was involved in a sexual relationship with Pallenberg. Richards was in Paris recording with the Rolling Stones but his son was at the house when the teen killed himself. Pallenberg was arrested; however, the death was ruled a suicide in 1980, despite rumours that Pallenberg and Cantrell had been playing a game of Russian roulette. The police investigation stated that Pallenberg was not in the room or on the same floor of the house at the time the fatal shot was fired.’ 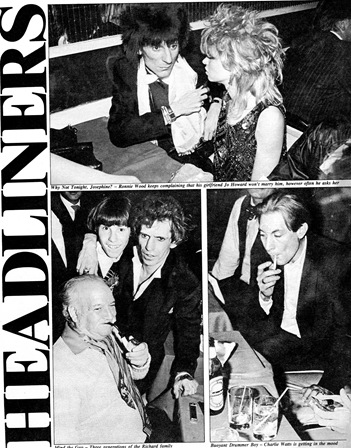 1983 Great pictures from the reception at the Corso Club in New York after the premiere of Hal Ashby’s film of the Stones 1981 US tour, entitled ‘Lets Spend the Night Together’. Captions: (Top) Ronnie Wood keeps complaining that his girlfriend Jo Howard won’t marry him, however often he asks her. [Left] Three generations of the Richard family [Right] Buoyant Drummer Boy: Charlie Watts is getting in the mood. [Mail on Sunday magazine] 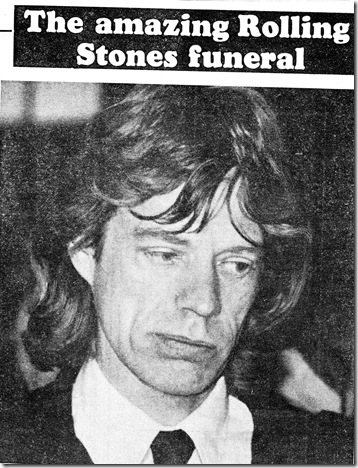 Dec 20 1985: Mick Jagger flew in from the States to join the rest of the Rolling Stones in tribute to Ian Stewart, the unknown ‘Stone’ who died last week. [Daily Mail 21 December 1985] 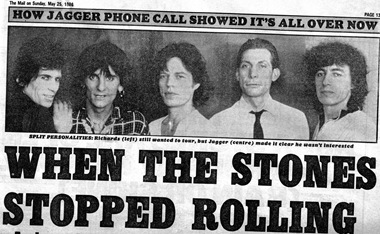 Prediction is a dangerous business. This story, written by Paul Rambali and Nick Kent, was published in the Mail on Sunday (May 25th 1986). [Paul and Nick are friends of colleagues of mine, both based in Paris. This is probably their only joint by-line.

It article begins with the phone call Mick made on a dodgy line from Antigua to the Stones’ office in London on April 3rd 1986: “Tell Keith I’m not prepared to tour America or Europe this year,” he said, There was a long pause filled by the crackling. “Nor”, he added, “in the foreseeable future.”

Rambali and Kent write: ‘Every rock journalist in the world would love to be able to write a story that could boast the headline: ‘The Rolling Stones are finished’. But the truth is it won’t ever happen quite like that.

‘Stories that the Stones look like splitting have been around for years, and the end will come with a whimper not a bang. But people will look back one day and realise how much of a landmark that phone call was.’