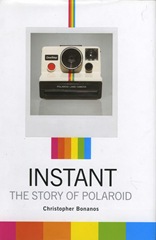 ‘INSTANT: The Story of Polaroid’ by Christopher Bonanos [Princeton Architectural Press] is a perfectly pitched and elegantly produced illustrated history of a remarkable man and the company he created around himself to realise his visionary ideas.

Bonananos respectfully references two previous works on the subject – ‘Insisting on the Impossible’ Victor McElheny’s 1998 definitive biography of Edwin Land and ‘Land’s Polaroid’, the 1987 personal memoir of former Polaroid exec Peter Wensberg – but his mission is to communicate this intriguing story in an accessible form to the general reader, to the camera enthusiast and – one would guess – to both the generation(s) for whom instant photography was a big thrill and their digital offspring, who never experienced it first-hand but are curious about this cool technology from yesteryear.

Polaroid cameras were the last great innovation of analog photography before the digital tsunami. The ingenuity involved in collapsing all the elements of a  chemical processing photolab into a film package that would develop an image instantly is astounding. For both professionals and amateurs alike, it offered instant gratification but also opened many interesting artistic possibilities.

Land recognised this from the off and the company assembled a marvellous collection of 20,000 pictures work produced by a stellar range of photographic artists. I had no idea that Land had hired Anselm Adams who enthusiastically used the evolving Polaroid systems to capture some of his favourite images. The elderly Walker Evans and Andre Kertesz both enjoyed fruitful final periods of activity when they were given Polaroids to work with. Andy Warhol of course made well-known use of the cameras’ potentials, using his photos as the basis for many of his classic silkscreen canvases. Robert Mapplethorpe explored its erotic potential while David Hockney created his beautiful Polaroid collages. One of the joys this book is to see the breadth, range and beauty of this work.

Alongside this are the beauty of the cameras themselves, particularly the remarkable SX-70, the size of a cigar case, which unfolded like a little tent. Land dictated in great detail the look and feel of the product. He ‘insisted that the panels of the camera body be covered in real leather. Its glass-fibre reinforced plastic frame was heavily chrome-plated giving it the appearance of brushed stainless steel while remaining warm to the touch. Never mind that the the cowhide added several dollars to the production costs, and that natural leather’s irregularities vastly increased the number of factory rejects.’

Land simply said ‘the camera deserves leather.’ All this cost a fortune – at least $600 million. Other insider rumours suggest that Polaroid spent a billion dollars on the camera and another bi8llion on the film.

Land filed his first patent when he was 19, for a polarising filter that he imagined could be used to cut glare from car headlights. That project didn’t get off the ground but polarising filters soon found a ready-market in the war effort for bomb sights and pilot’s goggles. These applications dominated the first twenty years of Land’s business life and enabled him to build a successful company. The photo business was very much a second act that the compnay was rebuilt around.

Land went on to file a total of 535 US Patents in many fields. Bonanos footnotes the fact that in virtually every biographical sketch of Land, that this total is second only to Thomas Edison. In fact, Edison filed 1093 patents but the second place belongs to electrical engineer Elihu Thomas with 700.

[Wikipedia’s List of Prolific Inventors says that Edison’s total was surpassed by a Japanese inventor in 2003. The world’s current champion inventor is now Australian Kia Silverbrook who holds 4,518 US patents and 9,740 internationally.]

Personal accounts of Land recall his obsessive drive and work rate, his piercing gaze, his genius for explaining complicated subjects clearly and infecting others with his enthusiasm. He hated to fire people and employed many women in top positions. Bonanos writes; ‘Land’s control over his company was nearly absolute, and he exercised it to a degree that was compelling and sometimes exhausting.’

Land’s personal vision led him into instant movies – Polavision – but his friend Akio Morita, the Sony genius told him he was too late. Land and Polaroid as a company were aware of the coming digital revolution but were still betting on hard copy and physical media.

‘What everyone had missed,’ writes Bonanos, ‘was that the digital revolution was changing the very nature of the photograph. From the very beginning, a photograph has been a physical thing: a glass or metal plate, a negative, a slide, a piece of paper. If you didn’t have that tangible object, you didn’t have a photo… No longer. Today. a photo is not a thing; its a stream of ones and zeroes.’

The end of the grand days of Polaroid was messy but the company still survives in a niche form with Lady Gaga signed up as a Creative Director. Alongside this, The Impossible Project have started producing new Polaroid film for the hundreds of thousands of existing Polaroid owners.

There is so much more in INSTANT that I can’t do full justice to. Suffice it to say, this beautiful and intriguing book will delight Polaroid aficionados and encourage a new generation to explore the mind and ideas of Edwin Land and maybe experiment with what’s left of his grand legacy. 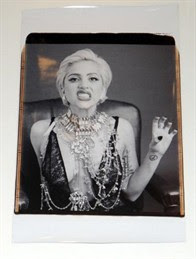 [Left]: Giant Polaroid of Lady Gaga taken with the camera below.

The giant 20x24 Polaroid Camera operated by 20x24 Studio in NYC. One of only five in existence, these were built in the 1970s to demonstrate the quality of Polaroid PolarII colour film. Most are still in operation and in high demand from artists and photographers. The huge negative produces same size prints of awesome quality. Full details here: www.20x24studio.com

PHOTOGRAPHIC FUTURES: The death of film in Japan and the new field of Computational Photography

PHOTOGRAPHIC FUTURES 2: The Impossible Project, Lomographs and the end of Kodachrome